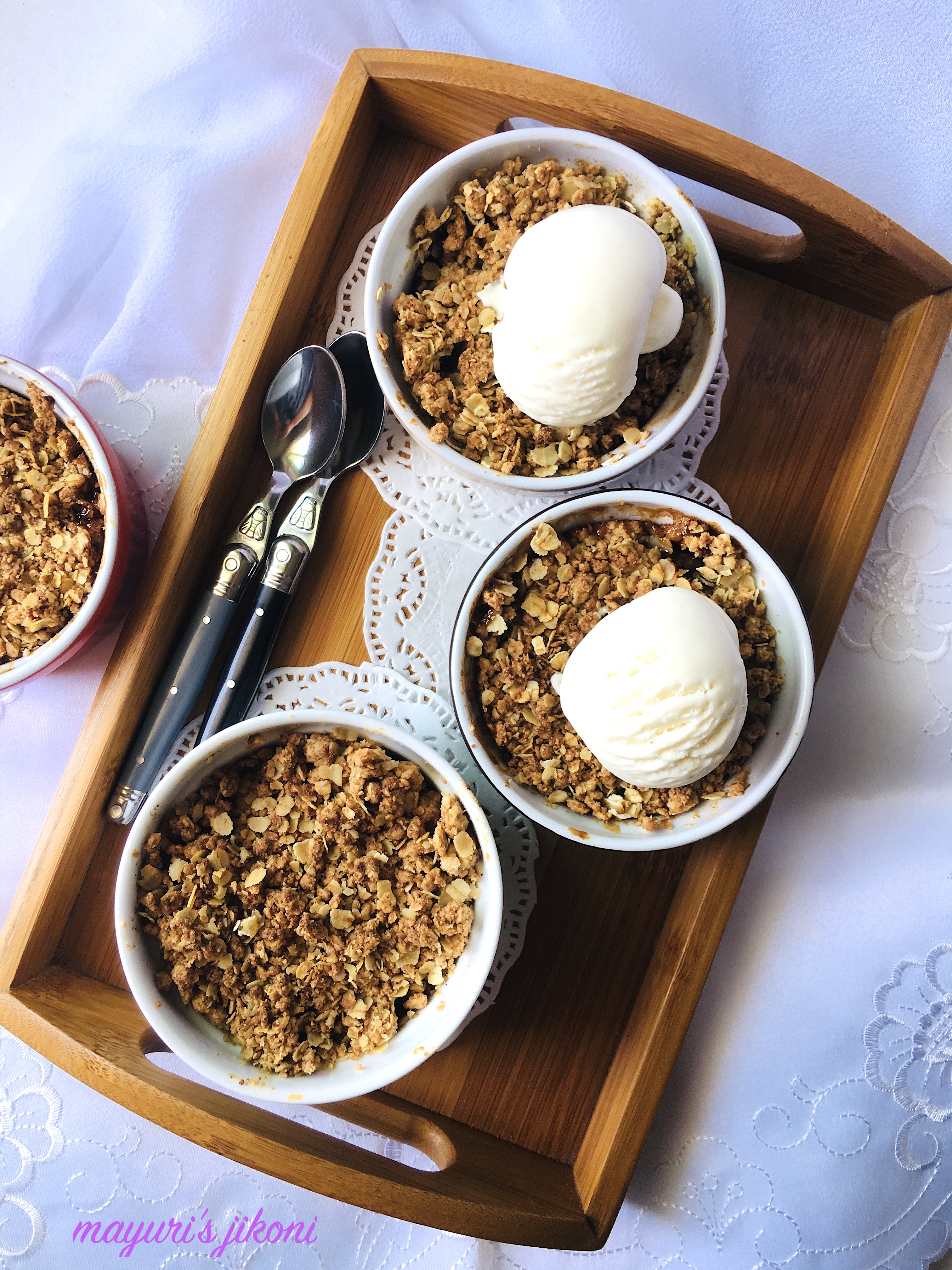 Apple Crisp is one of my favorite desserts to make whenever I have guests over. Not only is it an easy dessert to make, but a versatile one as other fruits too can be added with apple. My old photo for the recipe was hazy and appeared un appetizing. Now it looks different.

The group Foodies _ Redoing Old Posts, allows me to redo my old post, of which I have a large number. Breathing new life into them with new photos and better write up is what I like.  Its a bi monthly group, where members redo old posts and share on Facebook. That way we are able to get some bloggers’ love towards our forgotten posts. The idea of redoing old posts as a group was Renu’s idea. Renu blogs at Cook With Renu.

What is Apple Crisp?

Crisp is a dessert whereby a topping of mixed flour, oats, brown sugar and butter is sprinkled on top of a fruit or mixture of fruits and baked.

Usually summer fruits like peaches, nectarine, apricots, berries or winter fruits like apples, pears are used for a crisp dessert. The dessert is served warm with ice cream, whipped cream or custard.

My first taste of Apple Crisp

The first time I tasted apple crisp was at the late Marie Vyas’ home. Marie, got married to my hubby’s cousin and we quickly became good friends. In fact she was the reason I got into teaching. Even though I don’t have any formal training or degree in Education, she recognized my ability and invited me to train under capable and wonderful teachers at the school where she was the deputy head. From then on, there was no looking back. Apple Crisp recipe is dedicated to the wonderful humble, friendly and affectionate Marie. Miss her a lot.

From the time I learnt how to make this easy and delicious dessert from Marie, I’ve made it often whenever I have family and friends over for dinner. When I invited my mamaji and mamiji for dinner, I thought of making Apple Crisp. Marie and her husband both passed on when the son and daughter were very young. Her daughter was in my class when Marie passed on. It was only natural that a strong bond developed between the daughter and me. I wanted to pass on a bit of what Marie taught me to her daughter through this Apple Crisp recipe.

Before we go into how to make apple crisp, here are some suggestions how you can use apples. There are times when I have apples that no one wants to eat. That’s when I use them up into other different ways:

Can you add other fruits with the apple?

Yes, I’ve tried with blueberries, blackberries and strawberries. Can also use a mixture of apples and pears.

Which type of apples do you use for Apple Crisp?

Any, or a mixture. I prefer to use both green and the red ones mixed. However, using either is also fine. The apples should be crunchy.

For the crisp layer:

Flour – I prefer to use wheat flour but you can use plain or all purpose flour.

Oats – rolled or quick oats, any of your choice

Brown Sugar – can replace it with coconut sugar.

Butter – use salted or unsalted. I prefer salted and it has to be a bit soft.

Apples – use any crunchy variety of your choice. Cut them into slices or chopped.

Lemon Juice – for the balance of sweetness and tanginess.

Raisins – optional, I like to add them whenever I don’t have berries.

Flour – required to make the liquid a bit thick

Butter – for greasing the ramekins or tray

Its suitable for vegetarian

For a vegan version, replace the butter with coconut oil or vegan butter

For a gluten free version, replace the flour with oat flour or oat flakes

FOR THE CRISP LAYER:

PREPARATION OF THE FILLING:

BAKE IN A TRAY: