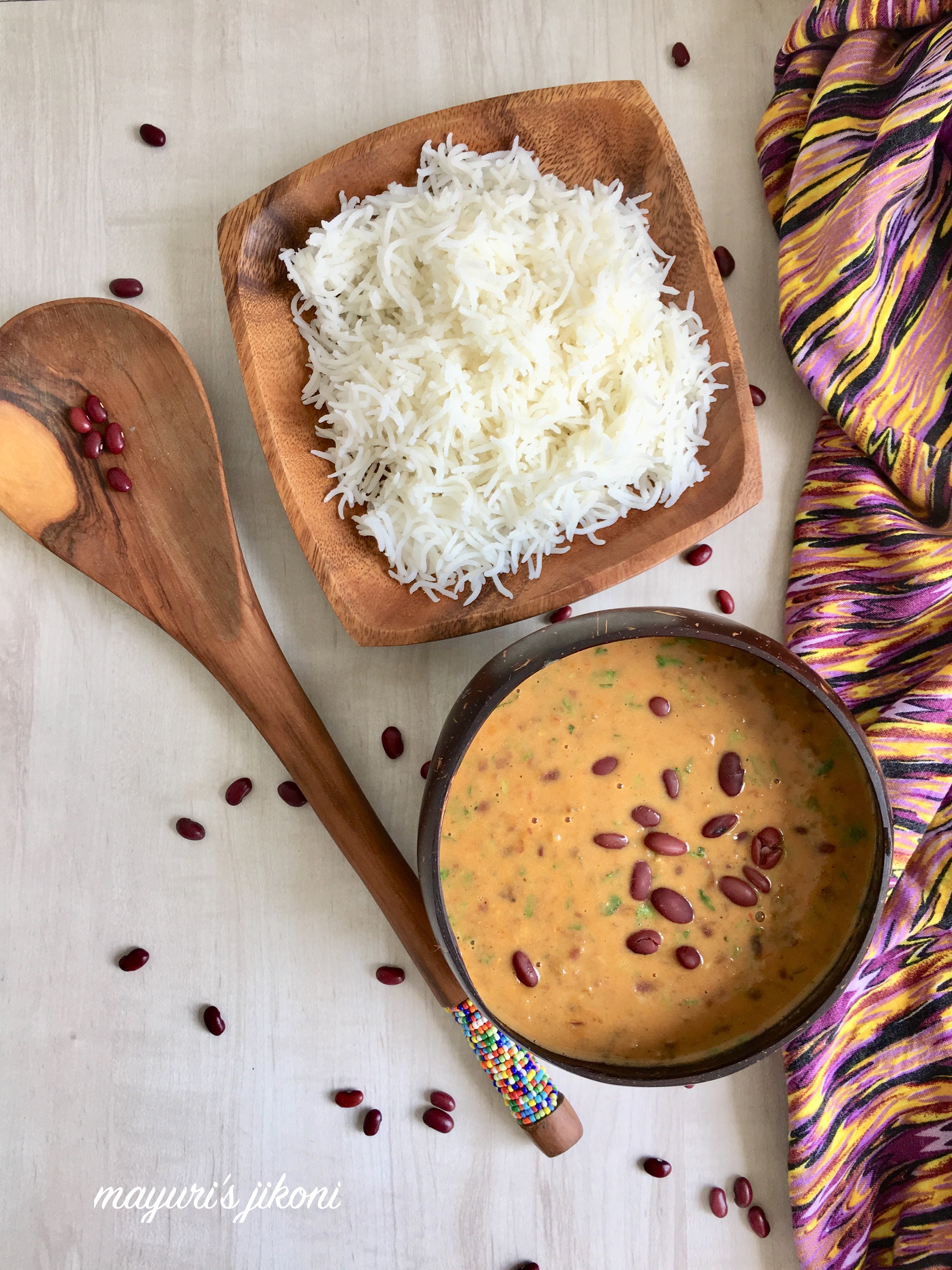 WHAT IS MAHARAGE YA NAZI/ RED KIDNEY BEANS IN COCONUT SAUCE

Maharage ya nazi is a popular Swahili dish which is made from red kidney beans, very simple spices, tomatoes and coconut milk. In the Kiswahili language maharage is red kidney beans and nazi is coconut. However, you must be wondering why I’m introducing you to the Swahili dish Maharage Ya Nazi or Kidney Beans in Coconut Milk. Well, read on and you’ll find out why that was cooked in my kitchen today.

For this week the FoodieMonday/Bloghop Group theme was suggested by Kalyani who blogs at Sizzling Tastebuds. The theme was Due South. In other words, Kalyani wanted us to cook a dish from any of the countries that are in the Southern Hemisphere. To illustrate specifically you may want to check out some her recipes from the Southern Hemisphere like the  Ecuadorian Quinoa Vegetable Stew or the Colombian Quinoa Salad with Avocado and Mango.

Basically the earth is divided into two parts horizontally, countries above the Equator fall in the Northern Hemisphere and countries below the Equator fall in the Southern Hemisphere. 32 countries come under the Southern Hemisphere. For this theme I targeted, South Africa, Australia and Fiji. However, the whole of last week I was in Mumbai and couldn’t cook anything. I had researched the recipes I would have loved to try out. I thought I’d be able to cook on Sunday but flight delay meant we got home in the evening. Exhausted, I was in no mood to cook but I didn’t want to skip this week’s theme. Hubby asked what I’d be cooking on Monday for lunch and that’s when I realized that why not cook something simple but nutritious from my own country.

How did I choose the dish?

Okay please don’t be up in arms that Kenya is not included in the Southern Hemisphere, but in fact it is. The Equator divides Kenya into half, placing it in both hemispheres. This led to the thought, but what can I make as I already have the more popular dishes like Ugali with chicha, Irio, and Githeri on the blog. Subsequently, came the thought of making something from the cuisine that is literally at my doorstep, The Swahili Cuisine. The most popular dish from that cuisine is Mamri which goes so well with Mbaazi (pigeon peas in coconut milk). However, its also enjoyed with stews made in coconut milk, tea or kahawa.

The Swahili people originate from Bantu inhabitants of the coast of Southeast Africa, that is present day Kenya, Tanzania, Zanzibar and Mozambique. These Bantu speaking agriculturists settled around the coast during the first millennium. Around the 8th Century they engaged in the Indian Ocean Trade. Interaction with the Arabs, Persians, Indians and Chinese led to their culture being influenced by the traders. Around the 10th century, Ali ibn al-Hassan Shirazi, a Persian prince of Shiraz founded the Kilwa Sultanate in the island of Kilwa (near present day Tanzania). In 1277 the Sultanate was replaced by the Arab family of Abu Moaheb who ruled the coastal regions till they were invaded by the Portuguese in 1505. The Bantu people around the coastal areas inter married and also adapted a part of the Persian and Arab culture. This interaction contributed in part to the evolution of the Swahili Culture, which developed its own written language, Kiswahili.  Incidentally, name Swahili comes from the Arabic word Sawahil which means coast. Due to the influence of both the Persians and Arabs, the coastal Bantu people adopted Islam as their religion. On observing the art and craft, architecture and food of the Swahili people one can’t help but notice the influence by the Persians, Arabs, Indians and Chinese.

Indian Ocean Trade included spices which the Swahili people began using in their cuisine. The Swahili Cuisine uses locally available ingredients that are used by the rest of the inhabitants of the region but the taste varies because of the use spices like ginger, turmeric, coriander, pepper, cinnamon and cardamom. By the virtue of being around the coastal area, coconut and coconut milk is a common ingredient in their cuisine. Meat, chicken, fish, beans and vegetables are all cooked in coconut milk or maziwa ya nazi. Mombasa Mix or Zanzibar Mix is a popular street food which has the Swahili and Indian influence. Kaimati, is a  sweet dish introduced by the Arab world (similar to luqaimat).Viazi Karai is so similar to bateta vada. Kachri Bateta is a popular street food that has both the Swahili and Indian influence.  Tea introduced by the Chinese, Masala chai and Chappati or Chappo by the Indians, Kahwa or black coffee with ginger, samosa, Pilau, kebabs, grilled meats by the Arabs,  which is popularly known as Nyama Choma (burnt meat) all indicate influences from trader communities that passed through the SE coastal regions of Africa. If you ever visit any of these coastal regions of Kenya, Tanzania, Zanzibar or Madagascar you must try out the Swahili Cuisine.

Kidney beans or red beans is a staple in the East African diet. The Swahili like to add some spices and coconut milk to make it into a mildly spiced dish which is usually served with plain rice, coconut rice, chapati (roti) or ugali. At a glance you may think its like the popular  Indian Rajma but the difference between the Indian style rajma and Swahili style Maharage ya Nazi is that its not heavily spiced, does not use whole spices, there is no vaghar or tempering. One can use dried beans or fresh red beans when available in season. Dried beans have to be soaked for 6-8 hours in warm water and then cooked till done. The mchuzi or gravy can be thick or thin, depending on your taste. Usually, the poor families will make it watery so that is enough for the family. These days ready made mchuzi mix is available in the market making it easier to make maharage ya nazi. Well, its time to check out the easy, mildly spiced recipe for this healthy, gluten free and vegan dish. I chose to serve it with rice as I didn’t have maize meal to make ugali.