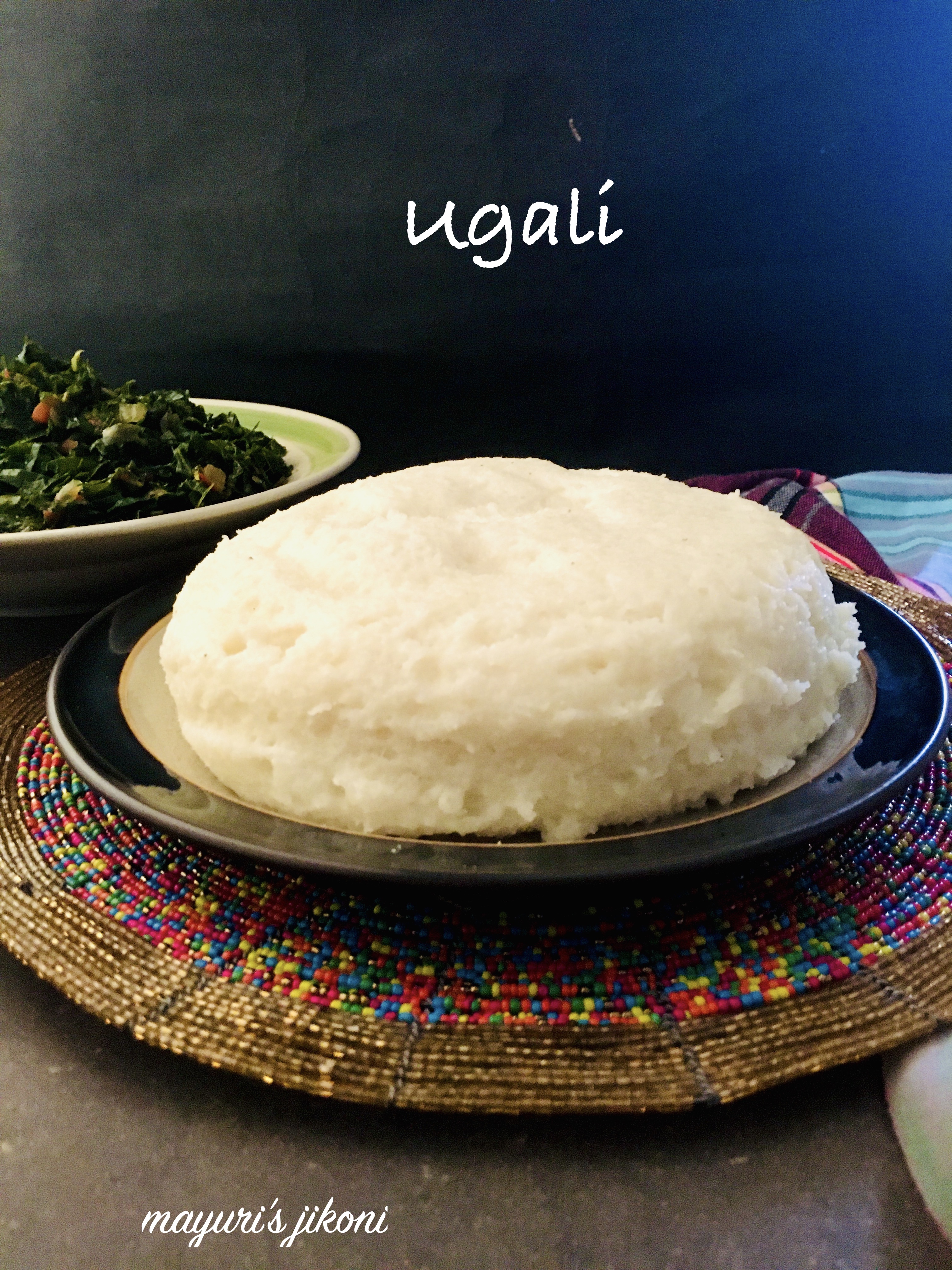 Ugali is like a porridge but much more dense made from white maize meal or maize flour. It is the staple diet of the indigenous people of East Africa. Also known as Nsima it is generally enjoyed with a vegetable and/or meat stew. People at the coast and around Lake Victoria enjoy it with fish. Ugali is also served with nyama choma which is grilled meat and kachumbari, a tomato onion salad. One of the most easiest dish to prepare, it is not only rich in fiber but also is a good source of carbohydrates, minerals and Vitamin B. And it is gluten free and vegan friendly.

Generally the cooked ugali is placed on a platter in the middle and everyone takes a bit from it and enjoys it. Ugali is best enjoyed with your hand rather than a spoon or fork. A small lump of the mixture is rolled into a ball using one hand. A depression is made in the middle with the thumb and it is used to scoop the stew.

Nowadays in restaurants people rather use spoon and fork. However, on the roadside kibandas (small eateries), ugali is eaten with the fingers.

Not much is known about the food culture on the Eastern part of Africa. I say eastern and not only Kenya as back then East Africa was one huge land and not divided as it is today. Millet and sorghum ugali was prepared before the Portuguese introduced maize or corn. During the British Rule, the white landowners began to cultivate maize in abundance. The workers were sometimes paid in form of maize kernels.

Most people enjoy ugali made from maize meal but nowadays the more health conscious ones have gone back to using millet and sorghum.

Over time mills were set up to grind the maize or corn and ready made maize meal or corn meal flour was available to all. In the villages, ready made flours are available but the more traditional families still prefer to grind it at home using stones.

Ugali like preparation is common in many other African countries. It sometimes varies in consistency, may contain a mixture of flours and usually known by different names.

As more people both men and women take up jobs, most don’t have time to cook and the food scene is fast changing to fast food like burgers, pizza and chips (French Fries). If meals are cooked at home then ugali till features on the menu at least 2-3 times a week.

Growing up my grandmother frowned if we ever asked for Ugali. But my brother and I would sneak out to the room where our house help stayed to enjoy ugali with him. Can’t believe we use have it even after we’d had our normal Gujarati meal!

Now no more sneaking out to enjoy this healthy dish, I make it at least once a week. We love to have it with Maharage which is a kidney bean stew, with sukuma wiki (stir fried collard/ collard green). When fresh amaranth leaves (chicha) is available them I make a stew with that. I also love nsima or sima with Gujarati style Tuvar Dal. Sometimes I mix both amaranth leaves and kidney beans to make a stew which hubby loves to have with Ugali.

NB: The amount that I prepare is enough for two. However, for the common man that would be enough for one. Normally, they have one heavy meal only and ugali tends to keep away hunger pangs for a long period of time. Either lunch or dinner is a light meal.

Video: How To Prepare Ugali

mayurisjikoni
Ugali is like a porridge but much more dense made from white maize meal or maize flour. It is the staple diet of the indigenous people of East Africa. Ugali or Nsima as it is known in Kenya, is generally enjoyed with a vegetable and/or meat stew.
5 from 12 votes
Print Recipe Pin Recipe
Cook Time 10 mins
Total Time 10 mins
Course dinner, Lunch, Main Course, Main Meal
Cuisine Kenyan
Servings 2