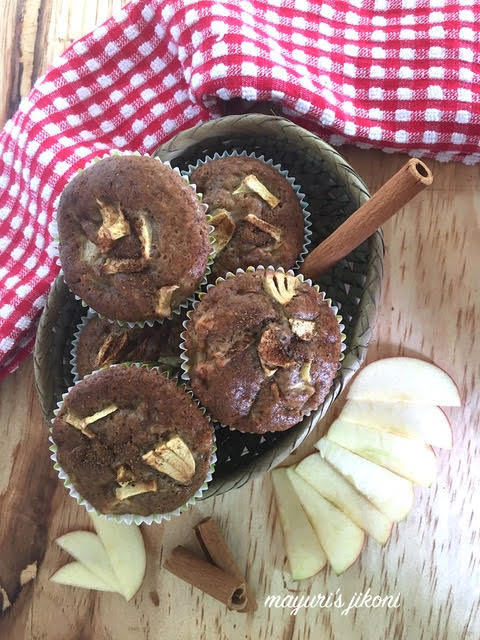 EVENT:FOODIEMONDAY/BLOGHOP
THEME:#192 ONE SPICE INGREDIENT
When Sasmita who blogs at First Timer Cook was suggesting themes for #192, I wasn’t paying much attention as I thought I wouldn’t be able to participate. It was when I got back to my hotel in the evening and saw over 50 messages on the group’s WhatsApp, is when I began reading them out of curiosity. With One Spice Ingredient as the chosen theme, I immediately remembered that I had a recipe in the draft that fits the bill. I was about to post this recipe for the minicake theme but changed my mind. I now know why this one got saved.
Sasmita has a wonderful blog with a huge range of recipes from Odia dishes to more recently, breads. Check her blog out.
Apple and Cinnamon are undoubtedly the best combination when it comes to bakes and desserts and even apple drinks. When I baked the muffins it was not to use up the apples or anything of that sort. You’ll probably laugh if I told you why I baked the muffins. I had run out of cinnamon so the next trip to my favorite Indian grocery store in Mombasa, Indian’a Spices, I saw these really long curled up cinnamon sticks. Usually we get the broken sticks but these were whole. I immediately bought the packet. On opening the packet, the cinnamon smelt heavenly. Immediately I thought of apples and cinnamon and thus this recipe.
I think as bloggers we go crazy with spices and exotic food items. Every time I pass a fresh produce market or shops selling dried fruits, spices, nuts, hubby takes hold of my hand and pulls me towards another direction ever so fast. If it were up to me my suitcase would be full of these food items.
When I baked these muffins with freshly ground cinnamon, the whole house smelt amazing. I truly believe that to get the best out of a spice, its best to use them when they are fresh and if one requires to use it the powdered form then make very small batches of ground spice. After a while the aroma and flavor tend to disappear.

Cinnamon is a spice that is made from the inner bark of trees scientifically known as Cinnamomum. It has been used as an ingredient throughout history, dating back as far as Ancient Egypt. It used to be rare and valuable and was regarded as a gift fit for kings. Branches of these trees are cut and the outer bark is removed. Its then beaten repeatedly to remove the inner bark. The inner barks come out as thin rolls called quills. These are dried and sold. The main flavor of the cinnamon spice is from essential oil and principal component, cinnamaldehyde. Nowadays cinnamon is widely used in bakes, desserts, spice mixtures, drinks and local authentic dishes.

Did you that there are four types of cinnamon?

Many people are consuming cinnamon either with hot honey and lemon water, sprinkled in oats and cereals or used in dishes. If you consume cinnamon on a daily basis then for health reasons its best to buy the one with low coumarin levels. Too much coumarin is not good for health.

You may want to check out the following Cinnamon Recipes:

Sparkle is Day 18 theme. Sparkle in your eyes, spa

One of the most exhilarating experience of my life

Tomato Carrot Soup is what I’m sharing for the M

While I do love any sort of cheese with almost any