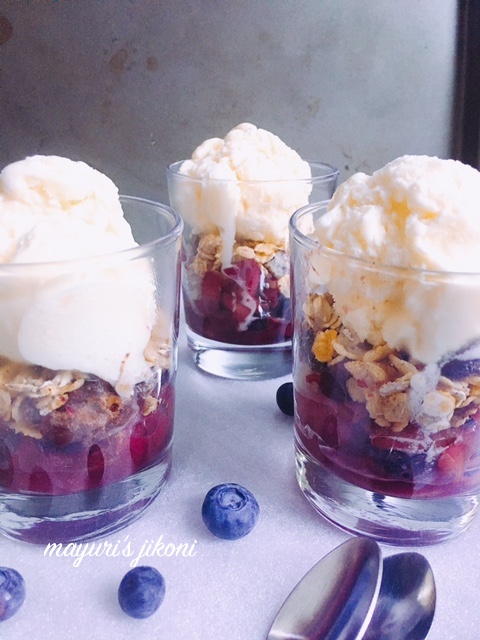 I love making easy desserts. It usually means I get to serve it in a glass and its just a matter of putting a few ingredients together to make a satisfying dessert. Srivalli, the starter of Blogging Marathon suggested that for this theme we make desserts that normally we would bake but instead to beat the heat, make them in such a manner that we don’t have to bake them in a convectional oven.

When I decided to choose the theme, the first baked dessert that came to my mind was apple crumble or as its known apple crisp. Basically, chopped apples mixed with a bit of butter, sugar and cinnamon are layered in a baking dish. Then its topped with a mixture of plain flour, butter, oats and cinnamon. The dessert is baked. At the bottom you have the soft apples and the top is crispy, crunchy. Its usually served with ice cream…a hot dessert with cold ice cream. I love this dessert.

So I had to make a no bake version of this dessert. Anyway its been pretty hot in Montreal and cooking in front of the oven and the hot plates is not so appealing. The weather here can get pretty hot and humid. However, what I really enjoy here are the visits to the supermarket and the market. So many colourful fruits and vegetables are trying to outshine the variety of flowers. One gets to see greenery everywhere and its heaven to walk here without any matatus or rickshaws honking at you and trying to invade your space.

For the apple crumble parfait I decided to add some blueberries…okay… I just couldn’t resist adding them as I want to take full advantage of the abundance of berries here. I cooked the apples and blueberries in a little bit of butter till the fruits became soft. Instead of the homemade crisp layer, I added some ready made granola and the dessert was ready to be served.


Tips:
You may want to check out some apple recipes: