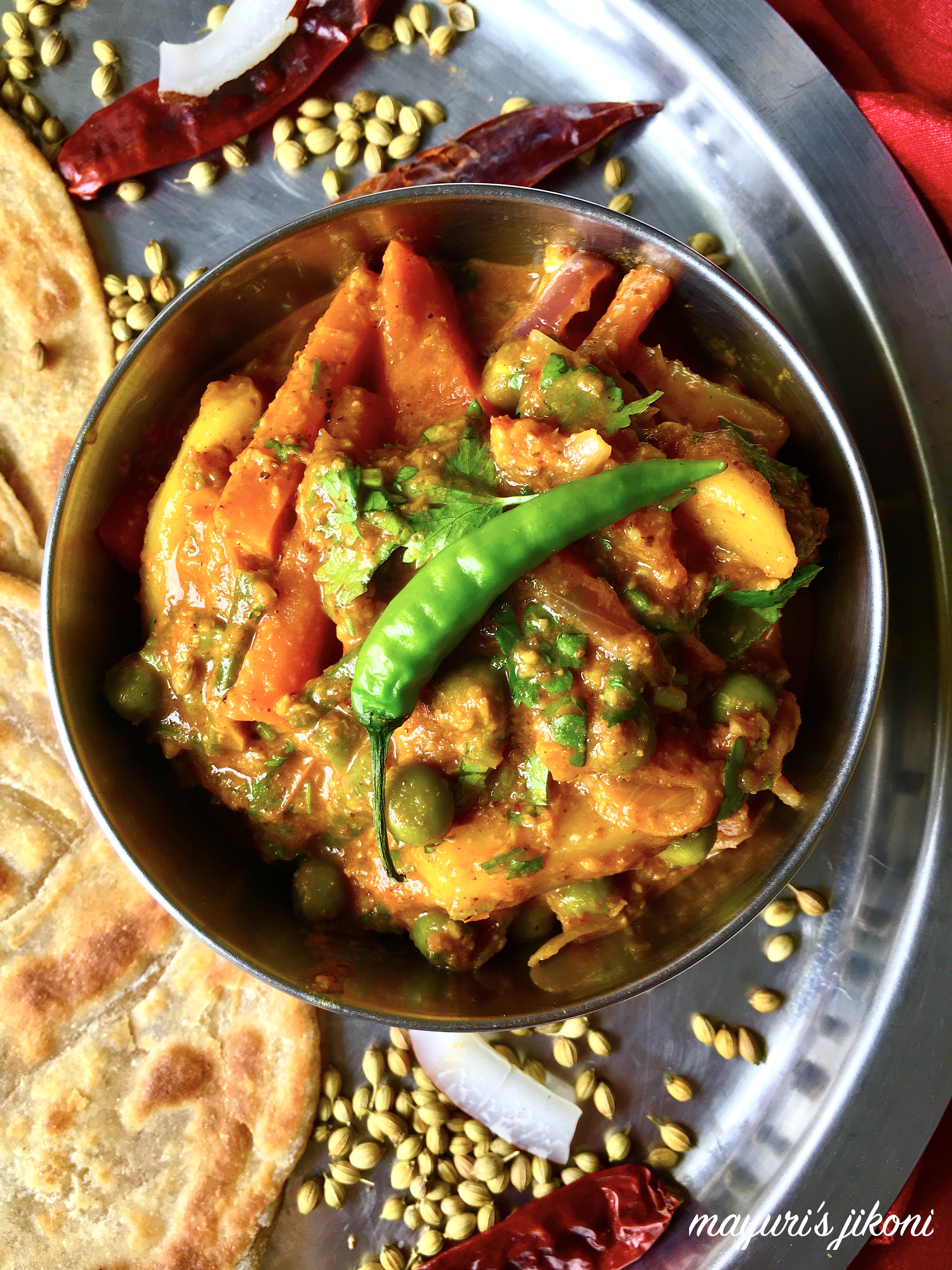 This week, the group is visiting the state of Maharashtra in India. Well, virtually at least. Priya suggested we make a dish from the Maharashtrian Cuisine. Initially, I wanted to make Kothimbir Vadi but made Vegetable Kolhapuri. Check out Priya’s blog Sweet Spicy Tasty for South Indian cuisine and more. Yes that’s the unique name of the blog.

A bit about the Kolhapuri Cuisine

Kolhapur is a district in South West Maharashtra. Incidentally, the main city too is called Kolhapur. Kolhapur is a foodie’s paradise. Most people think that Kolhapuri Cuisine is fiery hot but that is not true. Definitely hot peppers are used for some dishes but not all.  Typically, flavors come from the freshly homemade made spice mixtures. Kolhapur is also well known for its dry and wet non veg curries like mutton, chicken. Food from this region is not restricted to meat only. They have Kolhapuri Misal, Kolhapuri Bhel, Kolhapuri Vada Pav, etc. In fact, I hear these dishes taste different from the rest of Maharashtra.

While compiling my post on different Indian Curries, none of my blogger friends had a Kolhapuri Curry recipe on their blog. Subsequently, that got  me wondering how come this aromatic and delicious curry has not been blogged by any of them?  Priya gave me the right opportunity with the Maharashtrian Cuisine theme.

Kolhapuri curries may not feature on an Indian restaurant menu abroad. However, it definitely is there on the menus in India, especially in the North and West. On several occasions I’ve had the opportunity to taste this curry at the ISCKON temple but without any onion or garlic. Its one of the most aromatic and delicious way to include a variety of vegetables in one curry.

For this spice mixture, the main ingredients are dried coconut, dry red chillis and coriander and cumin seeds. Addition of other spices vary from household to household. Commonly, the Kolhapuri Lavangi (chilli peppers) are used but they can be replaced with less fiery hot chillis. I mixed and matched the spices and came up with a version that suits my family’s taste. Obviously,  did away with the lavangi chillis and replaced them with dry Kashmiri chillis.

I made the dry version and used half of the spice mixture to prepare Vegetable Kolhapuri. I’ve stored the remaining spice mixture in the fridge to  use it later to make paneer kolhapuri or egg kolhapuri.

What Vegetables do you use for Vegetable Kohlapuri?

Actually, any. The vegetables are cut into thick strips or left chunky. You may use peas, carrots, French beans, cauliflower, potatoes. These days broccoli, sweet corn, baby corn, mushrooms too are added.

Some dishes from the Maharashtrian Cuisine you may want to check out:

FOR THE KOLHAPURI MASALA / SPICE MIXTURE:

FOR THE VEGETABLE KOLHAPURI