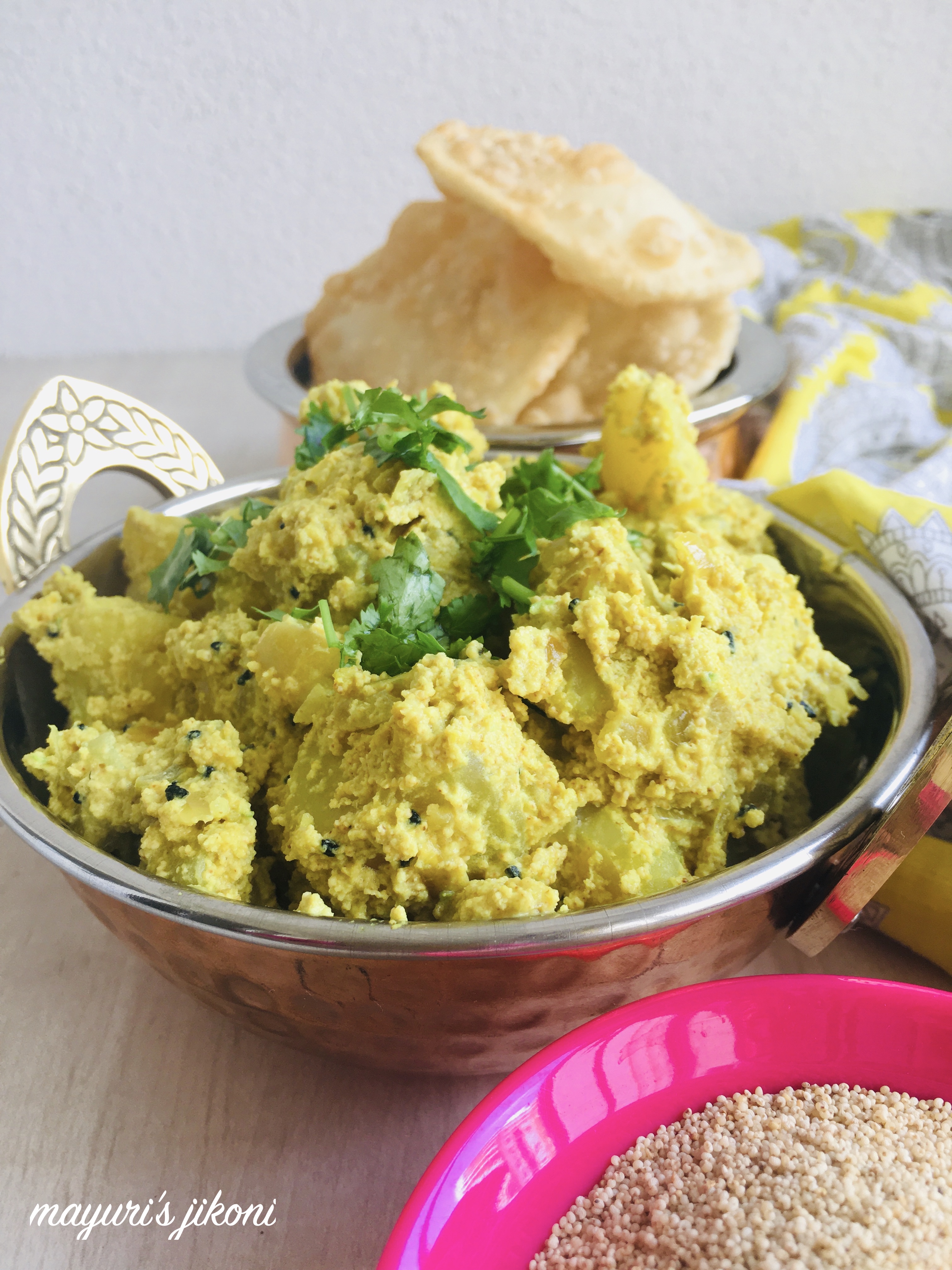 Like many other Indian states, West Bengal cuisine is a popular cuisine all over India. Think of Bengali Cuisine and Rasmalai, Rasgulla comes to ones  mind. Who can resist those sweet succulent juicy paneer balls? However there is so much more to Bengali Cuisine that those two sweet dishes I’ve mentioned. Patiently waited for the Bengali Cuisine to come as I so wanted to make the popular poppy seed curry or posto/poshto as its called in West Bengal. Thus, the recipe Aloo Posto.

My first visit to this state was years back when hubby and travelled from Nepal to Siliguri and from there to Darjeeling, Kalimpong and Mirik. Memories of our stay in the heritage British Morgan House which is now a tourist lodge managed by the Bengal Government was fantastic. The ancient stone house offered a fantastic view of Mt. Kanchenjunga. I remember we were treated like royalty. Mornings would begin with Darjeeling Tea served on the lawn facing the mountain and followed by breakfast. Of course that meant that the manager would ask what we’d like to have for lunch and dinner and that was prepared accordingly. Mirik too won my heart as back then it was such a quaint little place with homes with colorful gardens, lots of plants, flowers which included roses and orchids.

In the event that we had not planned out our trip well, we got stuck in Siliguri for several days as we were not able to get to Delhi. Frustrated, a man at the hotel we stayed at offered to get us a train tickets to Delhi but we had to catch the train from Jalpaiguri. Subsequently, we checked out of our hotel and made our way to Jalpaiguri with the man as the train would arrive at night. As we sat for hours at the station, he hovered around us for a while. Half an hour before the departure time, the station master put up the list of passengers and we couldn’t find our names. Consequently, we were not able to get on the train. Obviously, we couldn’t find the man who had ‘bought’ our tickets. We were duped!

Now really frustrated and disappointed at being cheated we didn’t want to go back to Siliguri. The only other place where we would be able to catch a flight to Mumbai would be from Calcutta. Remember, those were the days when there was only Indian Airline! At midnight we took a taxi from the station and the young man volunteered to drive us to Calcutta. Did we even know how far it was? Not at all. The aim was to just get out of West Bengal. The taxi driver stopped home to inform his family and pick up his cousin too. We drove the whole night, it began to rain heavily and his wipers were not working! His cousin is desperately trying to wipe the screen with him hanging half out of the ambassador car! We reached Calcutta at 2p.m. next day. No mobiles back then and no Booking.com too. He dropped us at a decent hotel near the airport. Tired from the journey, hubby and I slept the whole afternoon and woke up around 10p.m.

The hotel helped us to book a ticket to Mumbai. The little time we had in Calcutta, we decided to visit a busy market to enjoy some rasgullas. Next day we left for Mumbai. Our next trip to the state was around 2010 when we landed at the old airport and drove to Mayapur. Hubby and I spent 10 days at the ISKCON temple in Mayapur. That’s where we got to opportunity to taste a variety of Bengali dishes, all vegetarian. Sandesh in all shapes and flavors we served nearly every day along with Rasgulla and Rasmalai. After that we spent 3 days with my cousin in Calcutta. Totally awed by this City of Joy as it offers a mixture of the British Colonial feel and modernity. With many architectural, artistic and cultural places there is so much to see and do in what is presently known as Kolkata. Now before this becomes a travel post, I better enlighten you with a bit more about the Bengali Cuisine.

Think about Bengali Cuisine and fish and rice is what comes to the mind first and rightly so as that is the staple diet. Unlike other Indian State cuisines, I was intrigued to learn that Bengali Cuisine is the only cuisine in India that is served course wise. While food in India right from starters, side dishes, main and dessert are all served together in the form of a thali, Bengali meals are served differently. Bengali cuisine will begin with a ‘Shukto‘ a bitter preparation, like the type Sujata has prepared. Then Shak or a leafy green preparation follows, similar to Pui Shak Ghonto that Amrita makes. Along with that, Dal or lentil preparation, a meat, fish or egg dish  like Dim Posto  and chutney are served with rice as the main course. Then  comes the best part, the dessert which is served at the end. I don’t think you would be able to resist Rasmalai, rasgulla, sandesh like my Baklava Flavored Sandesh, doi bhapa to name a few. After looking at Pavani’s clicks on Rasgulla, you definitely will be yearning for some.

For Shhh Cooking Secretly group West Bengal is the last state we are visiting. It has been a long journey of discovering unknown dishes, preparing some very popular dishes and discovering that food definitely unifies the country. Members of this group give their partners two secret ingredients according to the theme decided and prepare a dish. For the month of February, my partner, Pavani Gunikuntla gave me poppy seeds and green chilli while I gave her lemon and cardamom. I decided to make Aloo Posto using the ingredients Pavani gave me and she has made mouthwatering Rasgulla. Her blog Pavani’s Kitchen is a treasure trove of some lip smacking dishes. As me some day will be definitely trying out her Bitter Gourd Roast.

I’m a huge fan of poppy seeds and love to use them. When Pavani suggested poppy seeds after much discussion over WhatsApp, I knew I wanted to use it to make a sabji or curry. The options were either aloo or baigan and aloo won. When you get down to making  Aloo Posto, its actually a very easy recipe. The basic phoshto or posto baata, can be used to with prawns, meat, fish, eggs, pumpkin, brinjal, bitter gourd, pointed gourd, okra etc.