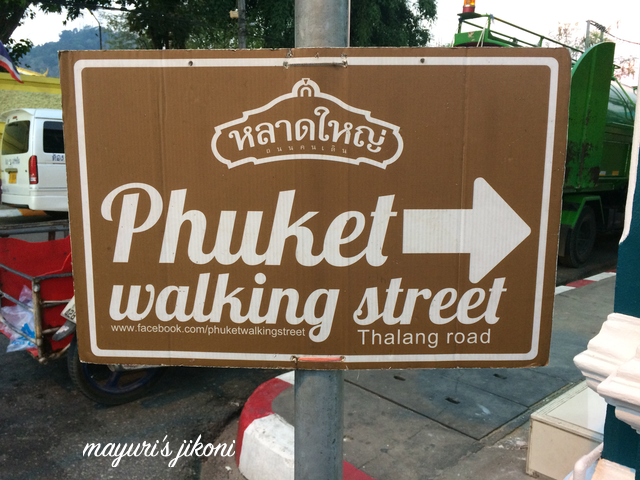 Phuket located on the trading routes between India and China was under foreign influence before the rest of Thailand. Ships would anchor at the safe harbors of Phuket and wait for the North East monsoon winds which would allow the ships to sail to India. The name Phuket is derived from the Malay word bukit, meaning hill. The island was previously named Junk Ceylon on European charts, a corruption of the Malay Tanjung Salang meaning Cape Salang. Later it became known as Thalang, after the name of the main town on the island.

Why should you visit Old Phuket Town?

Well, if you’re interested in history then its the perfect place to see Sino – Portuguese colonial mansions, occupied by Tin Barons about 100 years ago. Phuket town was built on the riches gained from the tin boom a century ago. At that time tin was a valuable commodity. This town also has a strong influence from the Chinese that came to settle here as tin laborers.

Old Phuket is a perfect example of how run down old buildings have been refurbished to house quaint little cafes, shops and hotels. Every place you enter, antiques are displayed aesthetically and proudly.

What did we do when we were in Old Phuket Town?

Well, we had a great time walking down the streets of Old Phuket admiring old buildings, stopping at shops to admire modern art, to view antiques being sold, some handicraft items and sampling food at the numerous cafes that line the streets. One day we walked quite a bit and reached the Gurudwara where my niece’s wedding was held. Its then we realized that we’d come a long distance for the Sikh Wedding right from Khao Lak to Old Phuket.

When in Old Phuket you shouldn’t miss going to the Sunday Walking Street Market also known as Lard Yai on Thalang Road. Lard Yai means big market. This Sunday Open Market is much better than the open markets we’d been to in Patong. Much cleaner, more systematic and a huge variety of food from different parts of South East Asia. This is one market where I found quite a few vegetarian options and got to try a variety of street food. It usually opens from 4p.m. till 10p.m. By evening it became so crowded  that hubby and I had to decide on a meeting point if we got separated.

I was tempted to sample the hokkaido cakes on sale but just had gorged on some Mochi Ice Cream. Did you know that these cute super soft chiffon cakes originate from Singapore and Malaysia and not Japan?

Check out the Thai Prik Nam Pla Sauce. Doesn’t it look fiery? Its made with Thai chillis (prik) added to fish sauce (nam pla) with some brown sugar and lime juice. Sometimes garlic too is added.

I’ve absolutely fallen in love with the Thai Milk Tea or as its known in Thailand  Cha Yen. Its usually made with condensed milk or without, can be hot or cold and it can be served with agar agar jelly. You can have it with milk alone or Chocolate milk too. Now that’s the part I love, the different jellies in cold iced tea.

Khanom Krok Khai Nok Krata is another popular Thai Street Food. Quail eggs are fried sunny side up style in a special  Khanom Krok pan which looks like a big aebleskiver or paniyaram pan.

Hotteok, though known as Korean pancake, it was introduced by the Chinese immigrants to Korea. Another option for vegetarians, its a sweet pancake. Yeast dough is filled with brown sugar, crushed nuts and cinnamon and then pan fried. Super delicious. You’ve got to try them hot hot.

Try out the hot hot Roti Canai or Murtabak which is a popular Malaysian and Indonesian street food. Its a flatbread stuffed with anything from meat, eggs, vegetables to banana and palm sugar. I had a really ‘cheesy (no pun intended) murtabak’.

You’ve got to try the famous Khanom Buang which is a special rice and mung flour crispy crepe. Its usually served with coconut cream and egg yolk strips. Did I try it? No, as I was just too full. And as my hubby said “leave some things for next time,” so hoping there is a next time where Thailand is concerned.

The famous Ball Ball Waffles from Hong Kong take on a new shape and topping in Lard Yai.

I took back to the hotel a huge bag of banh trang me. What is that you may wonder? Well, its originally Vietnamese Sesame and Rice Crackers. Rice is soaked and ground with water. Sesame seeds, white or black are added to the batter with little sugar.Cloth is tied over boiling water and skillfully a thin round flat circle of batter is spread over it. Its covered with a lid, allowed to steam for 3 minutes and then sun dried. They are then fried or grilled to make them into crispy snacks.

Don’t miss out those beautifully shaped and colorful Luk Chup or Look Choop. This sweet marzipan like dessert was introduced in Thailand by the Portuguese who made marzipan from almond flour. Since almond was not readily available in Thailand many years ago they made them using mung beans. In the past this dessert was only made for the king and the royal families. Its basically made from mung beans, coconut milk and sugar. Its then shaped into popular fruits and vegetables. With food colour and water, the shape is painted accordingly. Its then dipped in a gelatin or jelly solution to give it a shine. Aren’t they so so pretty?

Indian Food is usually completed with a betel leaf stuffed with sweet rose jam, some nuts, roasted coriander seeds, fennel seeds, betel nut etc. Its said that this paan as it is called helps to digest food. I was totally intrigued when I saw a lady at the market making something similar. Later on found out that the fresh betel leaf dish is called Miang Kham and its a leaf wrapped mini salad! A paste is made from ground shrimp, galangal, lemongrass, palm sugar, coconut, ginger, fish sauce and peanuts. Chopped chillis, shallots, peanuts, roasted coconut, dried shrimps are arranged in the middle of the leaf, topped with the dressing, folded and served.

Jian Dui or Ma Tuan or simply put Sesame Balls is not to be bypassed at all. These balls are made from glutinous rice flour, rolled in sesame seeds and fried. They are crispy from the outside and hollow inside. Sometimes fillings are added before frying. Loved how crunchy and not too sweet these cute balls were.

Looking for some inexpensive gifts to take back home for loved ones, friends or work colleagues? Then the market is the right place. Besides the usual large range of T-shirts, Cotton Shirts, dresses, handbags and sandals too what I found so attractive and cute were the porcelain and wooden little elephants, the fridge magnets, hand made, handcrafted soaps, long boat markets and cacti too. If you can sneak one back to your country, by all means buy them.

Those recycled bottles with fairy lights are so attractive, hubby at this point was literally pulling me away. He was scared that I’d filled my suitcase with all these gift items!

Next trip to Phuket, I’m going with an empty suitcase so I can bring back those colorful attractive coconut bowls, some wooden trays and the old old cups and saucers. Or I’ll make the trip on my own so hubby doesn’t stop me from purchasing half of the market 🙂

The big market is not only about food and souvenirs. You’ll be entertained by song and dance, there’s a place where kids can paint or discover some old quaint little doors to takes selfies or ask a friendly passerby to take your photo.

my serious better half, wonder why he still has his sunglasses flipped up?

and this is the exhausted me! A Sunday well spent.

You may want to read following Memorable Journey Posts: