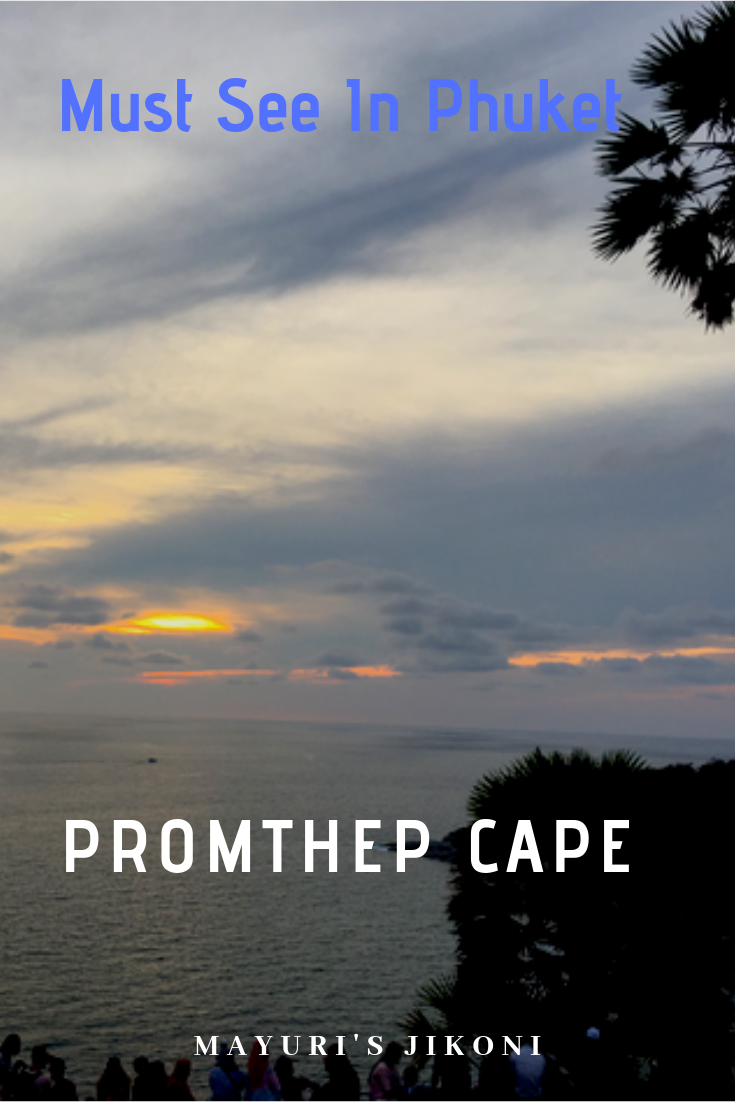 After visiting Big Buddha the taxi took us to Promthep Cape (Laem Promthep). Translated it means God’s Cape. For the locals its an important spiritual place.

The receptionist at the Crystal Beach Hotel had recommended that we go there to watch the sunset. By the time we reached there it was pretty cloudy and it was crowded. The locals were enjoying a picnic, the foreigners trying to get the best spot to view the sunset.

You pass Rawai beach and make your way up to the islands southernmost hill. A huge expanse of sea is what you see in front of you. We saw some longboats and speed boats all going towards the sea with tourists to enjoy the spectacular sunset.

As you walk up the hill you’ll find its lined by palm sugar trees.You can climb down to the Cape if you like but its not easy. Have to be pretty good at hiking to venture out there.

The statue next to the Golden Lighthouse is that of Prince of Chumphon also known as the ‘Father of the Navy’.

His Royal Highness Prince Abhakara Kiartiwonges, Prince of Chumphon
the 28th children of King Rama V (King Chulalongkorn the Great ), was born in Dec. 1880. He was sent to the Royal Academy of England  to study naval science. He was the first Thai prince to establish Royal Thai Naval Academy and the Naval Engineering School in Thailand. The prince built the first military base in Phuket.

At The Elephant Shrine you’ll  find a shrine all surrounded by statues of elephants in all colors and sizes. You’ll also find  colorful garlands on the elephants as elephants in Thailand are considered sacred. The shrine is dedicated to Brahma, the Hindu God of Creation.

Unfortunately, we were not able to view the much talked about sunset in all its glory as it was pretty cloudy. So no sun kissed ocean edge for us. However, the sunset still did not disappoint us as the hues of yellow and orange through the clouds was breathtaking.

Before heading back to the hotel, hubby and I both deserved something sweet to cool off as it was quite humid. We had the most yummiest ice lollies. I had coconut and hubby had mangosteen.

As you come down the hill towards the parking there are many shops that sell souvenirs, cold drinks, clothes etc. Promthep Restaurant, al fresco is a good place to have dinner as you can see the sea with the moonlight shining on it but we didn’t stay for dinner as they serve mostly Thai and Seafood. There wasn’t much on the menu for me.