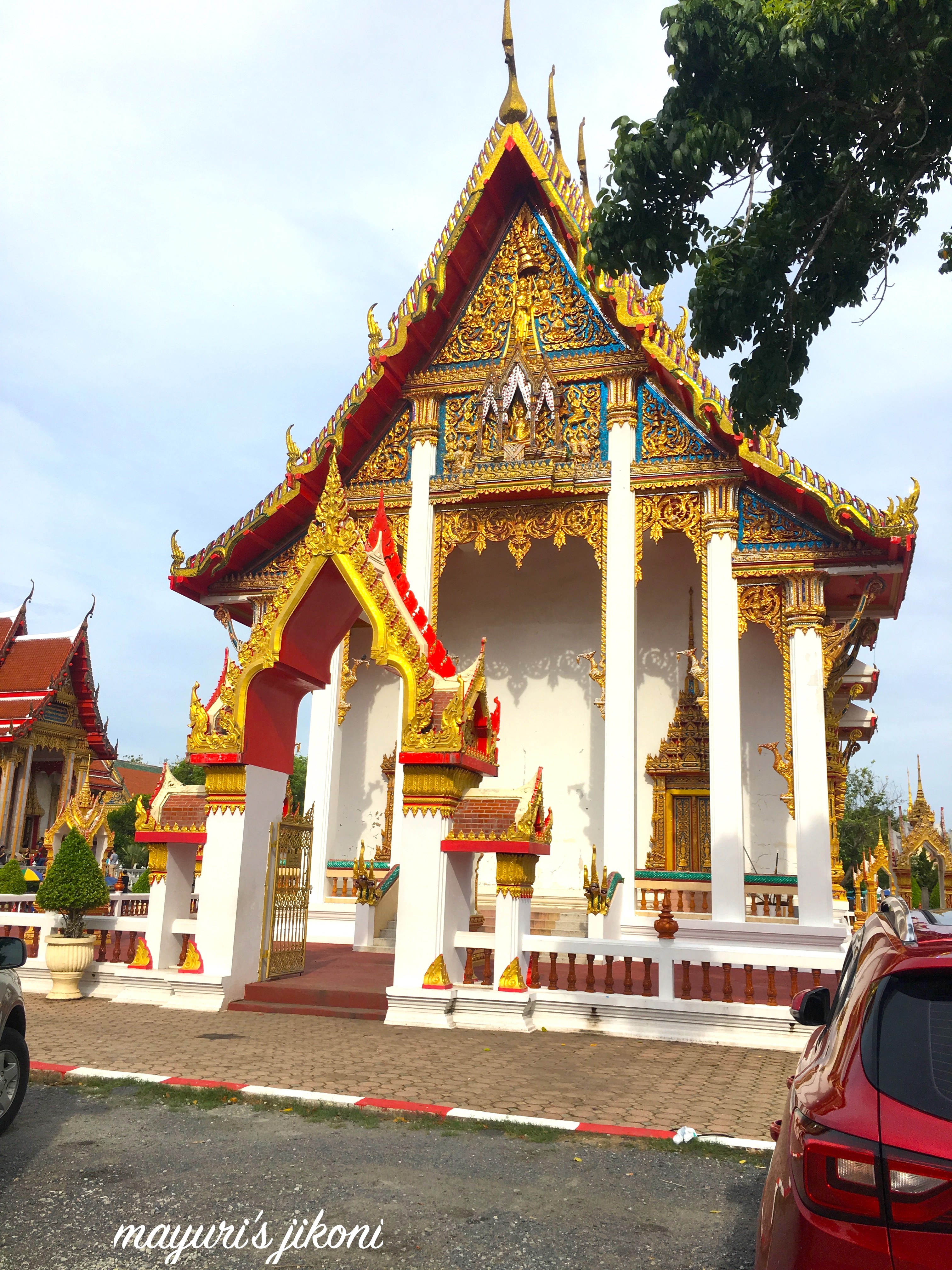 Our stay in Patong didn’t entirely go in walking on the sandy beaches, strolling through the malls and swimming in the roof top pool. The receptionist at Crystal Beach Hotel was kind enough to arrange a taxi for us to visit the nearby Buddhist temple Wat Chalong, Big Buddha and Promthep Cape to view the spectacular sunset. We hired the taxi for 4 hours but if you want to spend a lot more time in each place then its best to hire the taxi for more hours. Our taxi driver was a lady which was a pleasant surprise. However, we couldn’t have a conversation with her as she didn’t understand English.

“If you’ve not set foot in Wat Chalong then you’ve not really arrived in Phuket,” so the saying goes. It is one of the most famous Buddhist temples in Phuket Island. Wat is the Thai word for temple. Wats are an important symbol for Thailand as most Thais are Buddhist and also because these Wats are amazingly beautiful and you really get use to all the gold and colour you see around. Locals come to pray at the Wats and tourist and foreigners too are welcome as long as you’re decently dressed. Generally no bare shoulders, belly showing, legs should be covered mostly at least up till the knees and men cannot roam around bare chested. Basically, its dress decently and respect the Thai Culture. Make sure you visit Wat Chlaong before 5p.m.

The main building as you enter the Wat Chalong grounds is an Ubosot or Bot. Its the holiest prayer room and the ordination room. It is also where Abbot Luang Por Chaem’s walking stick is kept. Not everyone can enter an Ubosot.

No one knows when exactly this temple was established but most believe that the the original was built by King Rama II (1809-1842). It was later relocated to the present place. In 1876 during the reign of King Rama V,
immigrant Chinese tin miners rioted(Ang- Yee Rebellion). The local people were sacred and didn’t know what to do, to stay or fight back. They went to Abbot Luang Poh Chaem for advise. He told them that he was staying and so the locals stayed back and fought the rebellion. Later the King bestowed upon Luang Po Chaem the title of Phra Kru Wisit Wongsacharn.

It is also believed that Luang Po Chaem’s walking stick had healing powers. Two former Abbots Luang Poh Chuang and Luang Poh Gleum of the temple were known for their knowledge of herbal medicine and their work of healing of local people. Because of this many believers come to pray at this temple to get rid of their ailments, ask for good health for the family and for blessings from the monks. They pay respect to the monks by lighting candles, offering lotus flowers and placing gold leaves on the statues.

What I was surprised to see was that just at the entrance of the temple, lottery tickets too are sold. Many Chalong residents and believers buy the ticket and pray that their number will be the winning number.

As you move around the Chaitararam, you’ll occasionally hear loud exploding firecrackers. Don’t be alarmed. Believers buy firecrackers and make their wish. The firecracker is then passed onto the kiln man and he  strings them up and puts it in the brick kiln to burn. Bigger firecrackers have banners which get a bit scorched and you get it back as a souvenir.

As you walk around and observe closely, all ornate details around tell a story. Its unfortunate that the temple doesn’t have small explanation or any literature about them. Trying to ask the locals is really difficult as most do not understand and speak English.

The Four Passing sights are what led Prince Siddharta to give up his comfortable palace to seek enlightenment and become Buddha. They were a sick man, old man, body of a dead man and finally an ascetic meditating in peace.

What attracts majority of the tourist is the very long 60 metre high tower, stupa or Chedi. Is called the Phra Mahathat Chedi. It shelters a  bone fragment Buddha. As you enter the Chedi you’re invited with a kaleidoscope of colors. The walls and roof are covered with mural paintings depicting scenes from Jataka and the previous lives of Buddha. The pillars are covered with gold ornate patterns, the marble stairways lined with  a green long Naga. The presence of Naga or snake in temples wards off evil spirit and protectors of Buddha and Dharma.

The first and second level has a large collection of Buddha statues all in different poses.

The third level is where the bone fragment which is believed to have been brought from Sri Lanka and was installed in the Chedi by then Prince and now King of Thailand Maha Vajiralongkorn. This relic called Phra Borom Sareerikatat is kept in a small glass bottle or vial and the enclosed in a glass globe. As you walk outside around the 3rd level, you can catch the vista of the whole ground teaming with activity and in the  distance on a clear day see Big Buddha.

Hubby pointing to the hill or Big Buddha

One of the Bell Towers at Wat Chalong. The bell is usually rung when monks have to conduct their praying ceremony.

The trip to this iconic Wat was truly a serene and peaceful experience. Next time I would definitely love to spend more time observing the carvings and murals and try and decipher the stories they tell.