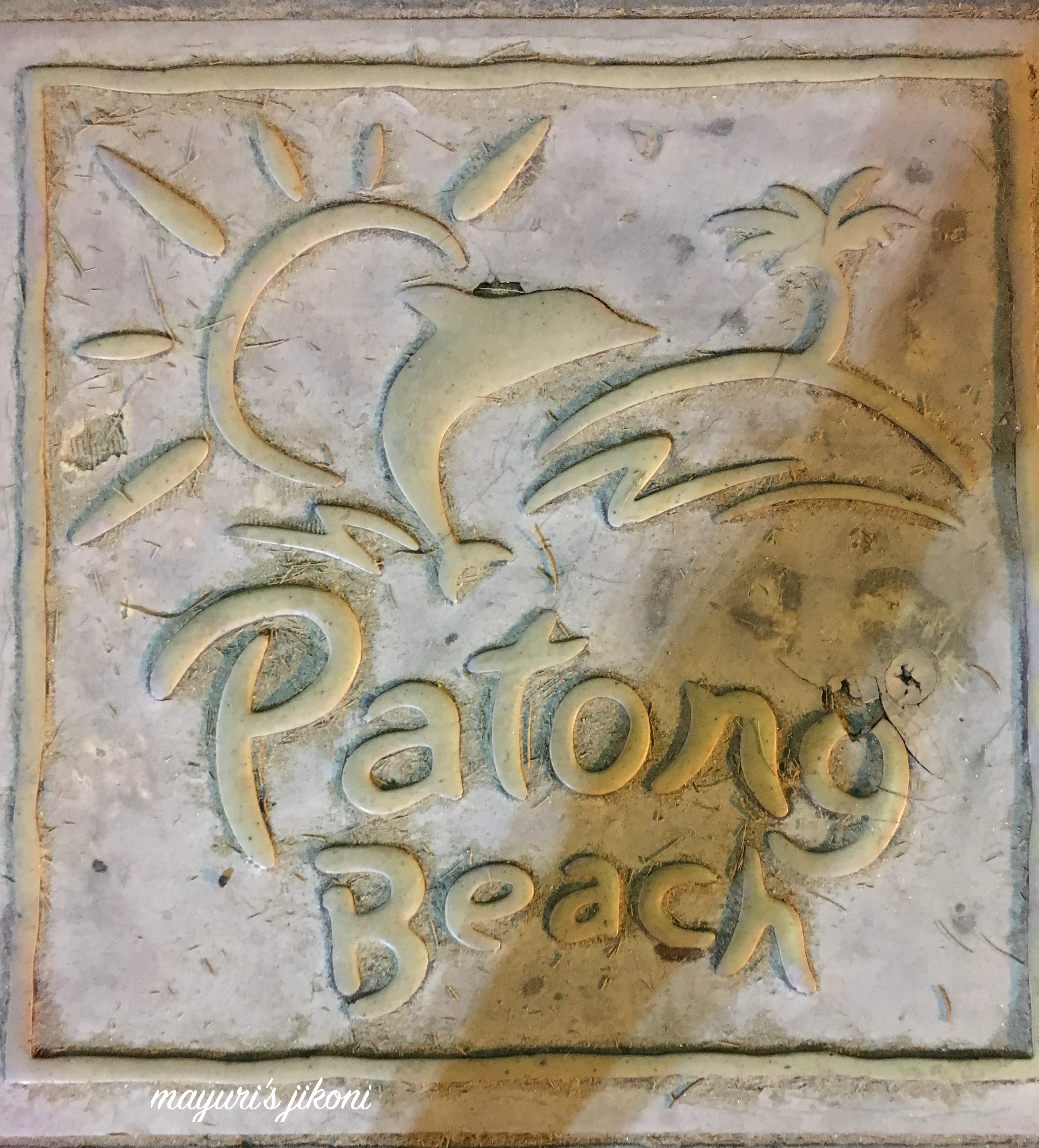 As sad as I felt leaving family behind, hubby and I were looking forward to our next destination. With mixed feeling we moved forward.

Originally we were booked to fly out to Chiang Mai, the land of misty mountains in north Thailand.  However plans changed as the pollution level in the area had reached a critical high. The AQI (air quality index) reached 230 at one point, which indicates very unhealthy air quality. It is believed that natural forest fires, intentionally set forest fires and crop burning attribute to this smog every year around Feb, March and April.

We were not planning to stay on in Phuket so didn’t really look into making any plans in that area. It was back to the drawing board with the trip to Chiang Mai cancelled. My first reaction was lets rebook the tickets and leave early for Bali. I got a “bad stare” from hubby. He must be thinking that I’m going all cuckoo. Sat down, opened the computer and googled what we could do in Phuket for 2 weeks.

Let’s clear one thing first, Phuket is a Province(Changwat) and there is  Phuket Town. The Changwat consists of the country’s biggest island Phuket and 32 other smaller islands. We booked 9 nights at Patong and 6 nights at Old Phuket Town. Patong with sandy white beaches edging the Andaman Sea, has a lot to offer. Beaches, night life, restaurants and shopping.What the rest of the family wanted to know was what we’d do all those days in Phuket. Well, some rest, some walking, some swimming and some touristy stuff.

A taxi drive from Marriot Resort Khao Lak to Crystal Beach Hotel took about 2 hours and we probably spent another 30 minutes looking for our hotel. What we find is though all these are tourist areas, the locals, staff at hotels, restaurants do not understand much English. We asked the driver if he knew where we are suppose to go and the most famous answer was ‘yes, yes’. On reaching Patong and the whole scenery is different, he is suddenly lost, doesn’t want to stop to ask for directions, expects us to read Google map in Thai. Three heads, hubby, my son and mine were now reaching a boiling point.

We reached Crystal Beach Hotel, a standard hotel right in the middle of the busy Patong. Tired and hungry, initially I got really disappointed with the room we had booked. Though absolutely clean, it was tiny. My son’s room on the other hand was spacious. Went to the reception and they told us to wait for 2 days and after that the bigger room would be available. We were wondering why the hotel was so full for the next two days.

A clean and comfortable entrance to the hotel – relax and read a book, they have a good selection or sit right out in the front with a cold drink and watch the world pass by.

After settling in the room, we should have taken a dip in their roof top swimming pool to cool off  but decided to explore the nearby area. Everywhere water pistols were being sold and yet we couldn’t figure out why. Just a 3 minute walk took us right to the beach. On the way, the alleys have so many not so expensive eateries.

Step out of the hotel reception area and you’re straight away on the busy  streets of Patong. Left of the hotel leads to the beach, right and then right again takes you to the famous Jung Ceylon Mall and the Central, Phuket Mall.

As my son was spending only a night in Patong we decided to walk a bit on the beach before heading to a restaurant for a meal. If as a vegetarian you think you’ll experience authentic Thai food then please don’t get your hopes high. Patong is a sea food lover’s haven and not for the faint hearted vegetarians.

Look out for this gigantic pink lunch box or tiffin as its called in India, that’s where you’ll find the food stalls on the beach.

Just across, the whole street is lined with restaurants serving all sorts of cuisines. Pick your choice, a fancy restaurant, fast food joints or street food.

There are several open night food markets that serve seafood, chicken, pork or beef either with noodles, rice, on skewers or in soups. Some of the more popular ones are Banzaan behind Jung Ceylon Mall, Bangla Street Food and Malin. They all serve more or less the same kind of food. Nothing much for vegetarians except for the fruits, juices and crepes.

While I enjoyed the fresh fruits, juices and coconut for breakfast,

these Indian restaurants near Crystal Beach Hotel came to my rescue for dinner twice. If you want really tasty Indian Food in a clean restaurant then you must visit the ICC Indian Curry Club on Soi Sansabai near the Bangla Food Market.

or some fresh fruit/nutella crepes

or some rolled or stir fried ice-cream. Milk, sugar, cream mixture is poured on the pan which is cooled to -30°C, fruit pieces added and chopped with 2 paddles. The mixture is then scrapped and mixed using the paddles. The  mixture is then spread into a thin layer using the same paddles several times.  Expertly, its scrapped into rolls and served with added fruit. Choose any fresh fruit, Oreos, chocolate, nuts you like.

Fresh pineapple juice served in a scooped out pineapple at Bangla Market.

As I mentioned above, most hotels were full for the 11th to 15th April and we were wondering why till a really friendly Hindi speaking Nepali shopkeeper told us that is was because of Songkran. We asked her what that was and she explained that it was the Thai New Year and celebrated like the Indian festival Holi but without any colour. She warned us that people would spray water on us for the next two days.

Hubby and I enjoyed the festival on the first day. Had enough of warm and ice cold water poured on us so the next day we managed to dodge a few and  took refuge in Central Mall.  However, on our way back to the hotel some hooligans poured ice cold water on us repeatedly. Most locals refrain from spraying you if you join your hands and bow slightly but the outsiders don’t understand either the culture or meaning of the whole festival.

Its celebrated over 3 days usually starting from 13th to 15th April.

In the past only small bowlful of water was sprayed on each other to signify the washing away of misfortune and starting anew. However, nowadays buckets, hoses and water guns are used and this continues for 2-3 days.

We probably would not have experienced all the festivities of this important festival if we were not staying in the heart of Patong. Sand sculpture competition took place in the morning and in the evening a beach musical party.

totally soaked! But its so hot that the clothes dry up just as fast.

Bangla Road or Walking Street which is usually quiet during the day was where most of the spraying activity was at its maximum from Friday till Sunday late night. The street becomes alive from evening till late night as its lined on both sides by beer bars, cocktail lounges, loud music, dancing clubs, go-go bars.

Live music on the beach

While all the tourists eat at restaurants, malls, or street food most shopkeepers, massage ladies, shop assistants, buy food from moving carts like the one below

or from people with carrying poles balancing basket full of food.

But definitely not this 🙂

Two main shopping malls in Patong are JungCeylon and Central Patong. While both have several restaurants and food courts, I prefered the Central Mall. At the JungCeylon food stalls, one had to sit in designated areas  which became a bit tricky as hubby wanted to have sushi and I wanted to have falafel. He had to sit at the sushi stall and I at the Lebanese stall. It was after much cajoling we could sit together.

At Central, doesn’t matter where you order your food from, the sitting is common. We also loved the pizzas from Mozza situated near the main entrance to Central Mall.

The Thai Salad bar at Central will make nice Papaya Salad called Som Tum without any seafood or fish sauce on request.

There are many variations of this salad depending on whats added to it. Depending on restaurants and areas you may find prawns, eggs, crabs, fermented fish, noodles etc in the salad along with papaya, beans, peanuts and chilis.

For vegetarians there is a Vegan Stall and an Indian Food Stall. I paired a naan with my papaya salad…yes weird as it may sound. The naan was absolutely soft and delicious.

My cousin and her family had decided to spend a few days at a resort on Kamala Beach. This gave us the opportunity to meet up as Patong and Kamala are not too far. Together, we went to see the famous Simon Cabaret Show. What is the hype about this show that everyone says we must watch? Well, for one the costumes created are outstanding, the stage setting fabulous, modern lighting equipment, high tech sound system and all about clever choreography. Its like a Las Vegas style dancing show only that the ‘girls’ are not girls but ladyboys as they are called. To please the diverse audience, they try to include dances and songs from several countries. We were pleasantly surprised that they danced to the Bollywood number too. The seats are very comfortable, the theatre like a modern movie hall. The  hall can seat up to 550 people. They have 3 shows everyday, at 6.00pm. 7.45pm and 9.30pm. Photography is strictly prohibited inside the theatre. Getting there was easy as its not far from Patong, we went by the songthaew which charged 400 baht for 7 of us. Tickets are available at any travel agency, hotel receptions, at the venue or simply purchase it online.

Some people may deprecate at the idea of watching this show but  first started in 1991 provides a over a hundred of these ladyboys a decent living by putting up a spectacular stage show.

Patong is full of life, ever so busy and a very colorful place and don’t miss out on passtion fruit mojito and blueberry mijito if you can find it 🙂

Next post will be about places to visit nearby when you’re in Patong.