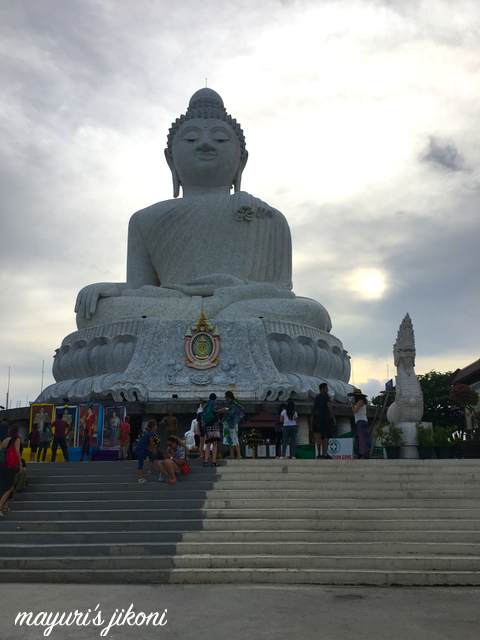 Phra Phuttha Ming Mongkhol Akenanakhiri means The Buddha, gloriously honorable, top of the hill of Nakkerd. Some say it means Buddha, happiness on Nakkerd Hill. Don’t know which is right. However, whichever it is, a trip to see this majestic statue is a must.

When we saw the statue of Big Buddha from the topmost floor of Phra Mahathat Chedi at Wat Chalong,  I was getting impatient to visit the place. Couldn’t believe that such a huge statue was constructed which can be seen from southern parts of the Phuket Island.

After Wat Chalong our kind taxi driver ( I just can’t remember her name!) took us to Big Buddha. As we drove up the Nagakerd (Nakkerd) Mountain, the scenery was breath taking, with so much greenery around. By the time we reached Big Buddha, it had become a bit cloudy.

When you’re about to reach the top, you’ll find an elephant sanctuary on the right. We didn’t stop to watch the elephants as we had seen them in the Kamala area. There is also an ATV Safari Camp. Here you can stop, they give  brief instructions about the ATV(All Terrain Vehicle) and then you follow the instructor in your ATV to the elephant sanctuary and Big Buddha. I’m not sure about the charges or the time you’re allowed on the ATV as we chose to reach the top in the comfort of our taxi.

As you come out of the taxi in the parking area, you take the left path to go to Big Buddha. Just as you turn a corner you’ll find a big illustration about how to dress as this is a place of worship. No shorts, no short skirts, no bare shoulders, no strapless tops or tanks tops. If you’ve not dressed decently, make sure you hire a sarong from one of the stalls or buy it.

As you walk along the path you pass a long room called the Sala of Faiths which has many statues. I recognized  Lord Ganeshji, the others were from Buddhism and Taoism.

On reaching the first step, you can’t stop admiring the humungous statue of Buddha sitting on a huge lotus flower, looking down with a friendly smile. The statue is 45 meters tall and about 25 meters wide. The structure is reinforced with concrete and covered with a layer of white Burmese jade marble. On either side of the stairs leading up to the statue you will see Nagas, protector of Buddha and Dharma though on the right side it seems to be incomplete.

Climbing up further, I didn’t know whether I should admire the Big Buddha which was becoming bigger or the splendid scenery behind me. As we reached the top, another smaller statue of Buddha became visible along with the Naga heads on either sides.

With all the offerings I figured out that this must be a very important site of worship. However, at the time of visiting Big Buddha had no idea who the two men on either side were.

On doing some research I came to know that on the left is the statue of King  Naresuan king of the Ayutthaya Kingdom from 1590 and overlord of Lan Na from 1602 until his death in 1605. He freed Ayutthaya from the vassalage of the Taungoo Empire of Burma.

On the right is the statue of King Chulalongkorn also known as Rama V. He was known as the Royal Buddha and played an important role of modernizing Siam, and saved it from Western colonization.

As you reach the top, turn around and check out the scenery. Its simply breathtaking. Its the eastern part of Phuket and Chalong Bay and on the west Kata Bay and also Karon Beach. If you’re lucky you may even get to see the Phang Nga Bay on a clear day.

As you check out the base of the lotus, you’ll see many different statues of Lord Buddha in different poses. Alm bowls at each statue are present for donations.

Also present around the temple are 32 alm bowls for 32 good organs as the sign read.

Under the base you enter into a big hall called the Meditation Hall and temple. People can sit there and meditate along with the monks. There’s a shrine too there.

Didn’t go too near to the shrine as some recitals were going on. The construction is still incomplete. The whole construction has been done entirely on donations. They still need more donation. As you go outside there is a counter where you can purchase a jade marble tile for 300Baht or 1000Baht, write a message for loved ones gone, for good luck, whatever you want on it and put the money in the donation box.

Little gold heart leaves flutter from offering stands, trees, canopies with messages written on it by visitors. This is another way to donate money towards the project.

A breath taking view of Phuket town and the bays from the side small temples and viewpoint.
It is also believed that the hand, foot and seat print of Buddha are present around the small temple and view point. People were throwing coins and when I asked why they told me to look for the prints. Frankly, I couldn’t see them. But then again this area was extremely crowded. I feel that some of the younger tourists visit places just so that they can cling numerous photos of themselves against exotic backgrounds.

If you’re in Phuket, don’t miss going to Big Buddha, the sacred protector of Chalong. The younger and stronger visitors hike from the base and it takes about an hour. The place is open from 6 a.m. till 7p.m.

VEGETABLE KOLHAPURI Not too fiery hot, an aromatic