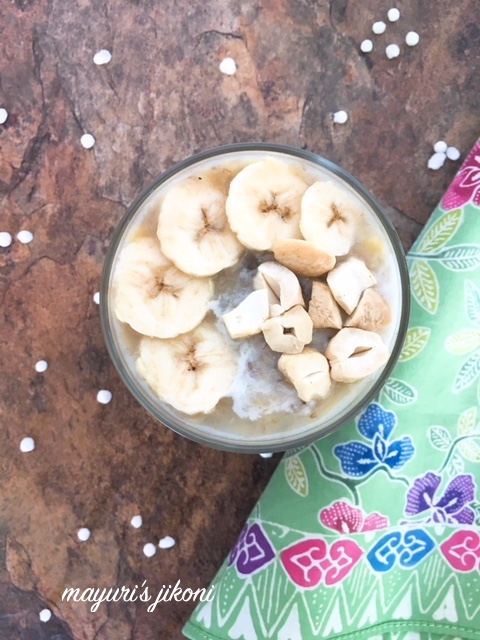 When Srivalli first suggested the themes for this Mega Blogging Marathon my mind was set on the breakfast theme. Little did I know that I would truly be exploring flavors from other countries and some from countries I’d not heard of like Tatarstan. At that time the only breakfast dishes that I could see were French Toast, different bakes, oatmeals, you know the usual Sunday brunch items.  When I decided to take on the challenge of making breakfast dishes from A-Z, that’s when a whole world of different breakfast dishes opened up.

Today’s breakfast is one such dish. Never heard of it before I started the research. Though it didn’t seem too appetizing to boil a ripe banana in water, I still had to try it. Isn’t that what the theme is all about exploring flavors that we’re not use to or haven’t had before? I must say after I prepared this particular breakfast dish I was surprised how tasty it was. Did I mention healthy too? Yes healthy and filling and a very different kind of breakfast.

Breakfast with letter S is Suafa’i from SAMOA. Staple products in Samoa are coconut, banana and cocoa. So its not surprising that they have a fruit soup which is commonly served for breakfast. Suafa’i is a banana soup and supoesi is a papaya soup. I initially wanted to make the papaya soup but didn’t get a nice sweet papaya.

Here’s the recipe for Suafa’i which is commonly served for breakfast in Samoa and can also be enjoyed as a dessert.

Check out what other Mega Blogging Marathoners have made for Day 19: