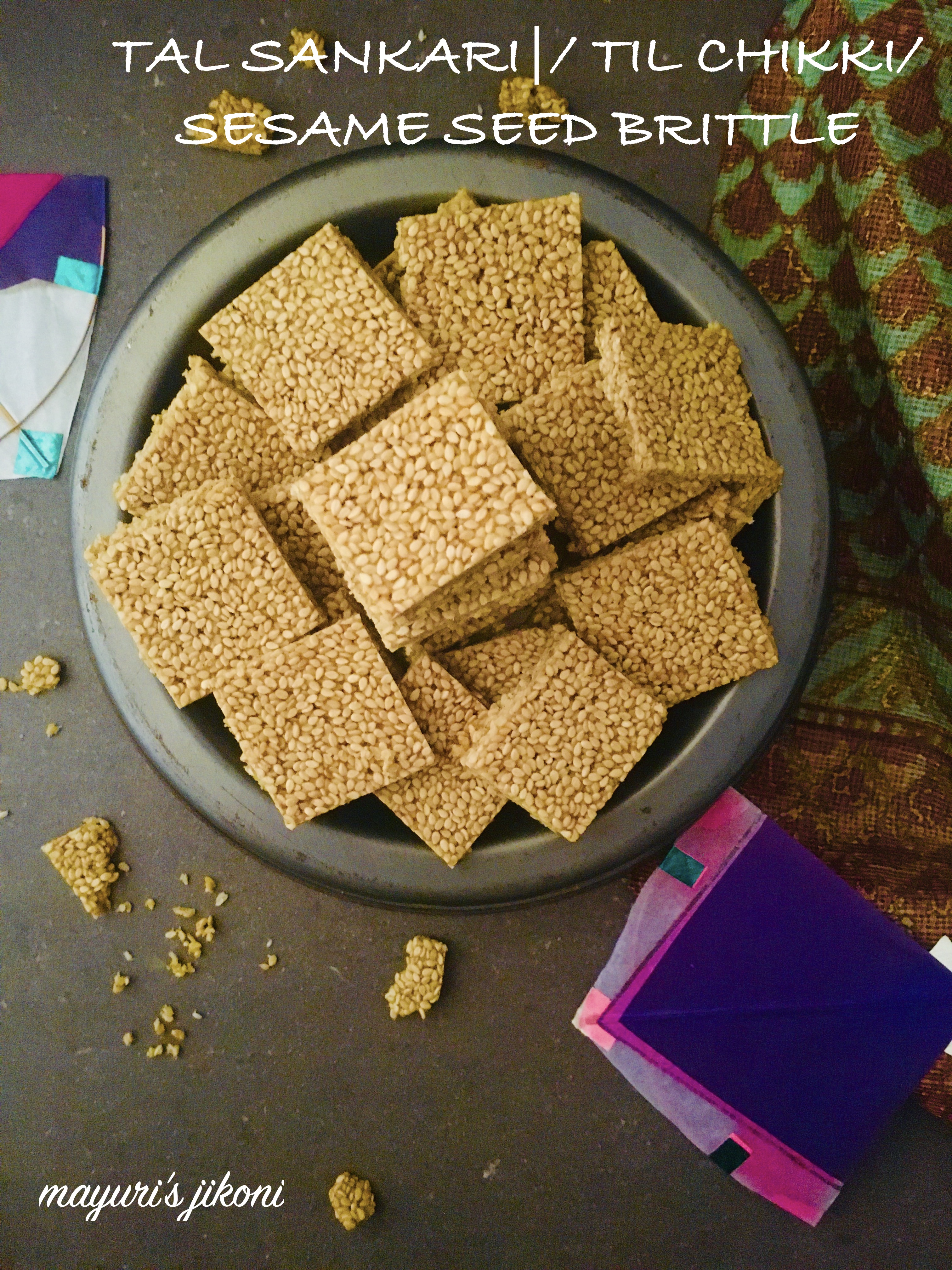 Tal Sankari/ Til Chikki, a must have Indian sweet during the Makar Sankranti/ Uttarayan/ Lohri festival. Generally made during the winter season as it provides energy, is nourishing and keeps the body warm.

What is Tal Sankari/ Til Chikki?

Tal Sankari/ Til Chikki is simply a delicious sweet made from two basic ingredients, sesame seeds and either sugar or jaggery. Some add a bit of ghee or oil, some don’t. There are so many variations of this basic tal sankari/ til chikki. One can add coarse nut powder or roasted split chickpeas ( roasted chana dal). Add flavorings like cardamom, nutmeg, rose essence, etc. All depends on how the family enjoys it. Here, I’ve just used sesame seeds, jaggery, a bit of ghee and cardamom powder. Tal Sankari is the Gujarati name for til chikki. It is also known as sesame brittle, tal or til papdi, til patti. The thickness will vary from paper thin to about half an inch in thickness. I still cannot roll it out paper thin as I feel that definitely is an art.

What is Makar Sankranti or Uttarayan?

This festival is celebrated by many states of India for different reasons. Its the beginning of the harvest season, its the end of the inauspicious phase which begins during mid December, its the end of the southeast monsoons. In fact, everyone celebrates this day because it marks the beginning of the transition of the Sun God from the southern  to the northern hemisphere. Many states fly thousands of colourful kites on this day as an oblation to the Sun. During Uttarayan different states make different sweets.

Why is Til Gud or Sesame Seeds and Jaggery important during this festival?

According to the Hindu mythology sesame seeds originate from the drops of sweat that trickled from Lord Vishnu and fell on earth. Also it is believed that the God of Death, Yama blessed sesame seeds and therefore are regarded as the symbol of immortality. It is a tradition in many families to gift sesame seeds and jaggery and wishing them they speak sweet words throughout the year. If one does not make tal sankari/ til chikki then til gud ladoos or balls are made.

This group was started by Renu, who blogs at Cook with Renu. The whole purpose of this group is to redo old posts with new photos, new write up, whatever one wants to do to make the post better. Most of my posts are about re writing the post in a more structured manner and of course updating the photos. Slowly but surely, going through so many of my old posts. I’m grateful that this group helps me stay focused on a task that needs much attention.

Gulachi Poli or Tilgul Poli– a Maharashtrian speciality. Flatbread stuffed with jaggery and sesame seeds and other ingredients.

Dahi Chura – flat rice and yogurt are mixed to prepare this dish and enjoyed in the state of Bihar.

Til Gud ke ladoo – an easy to make ladoo where you don’t need to make the jaggery into a syrup.

Nuts and Jaggery Brittle – mix nuts, dried fruit and sesame seeds to make something different for this festival.

Oats and Nuts Ladoo – made with jaggery and loaded with nuts, different seeds and oats.

Renu likes to add sunflower to the Til Gud Papdi she makes.

FOR A MIXED SEEDS CHIKKI / BRITTLE, WATCH THE VIDEO BELOW.

A different take on the traditional til chikki. I have used pumpkin, sunflower, sesame and flax seeds with jaggery.