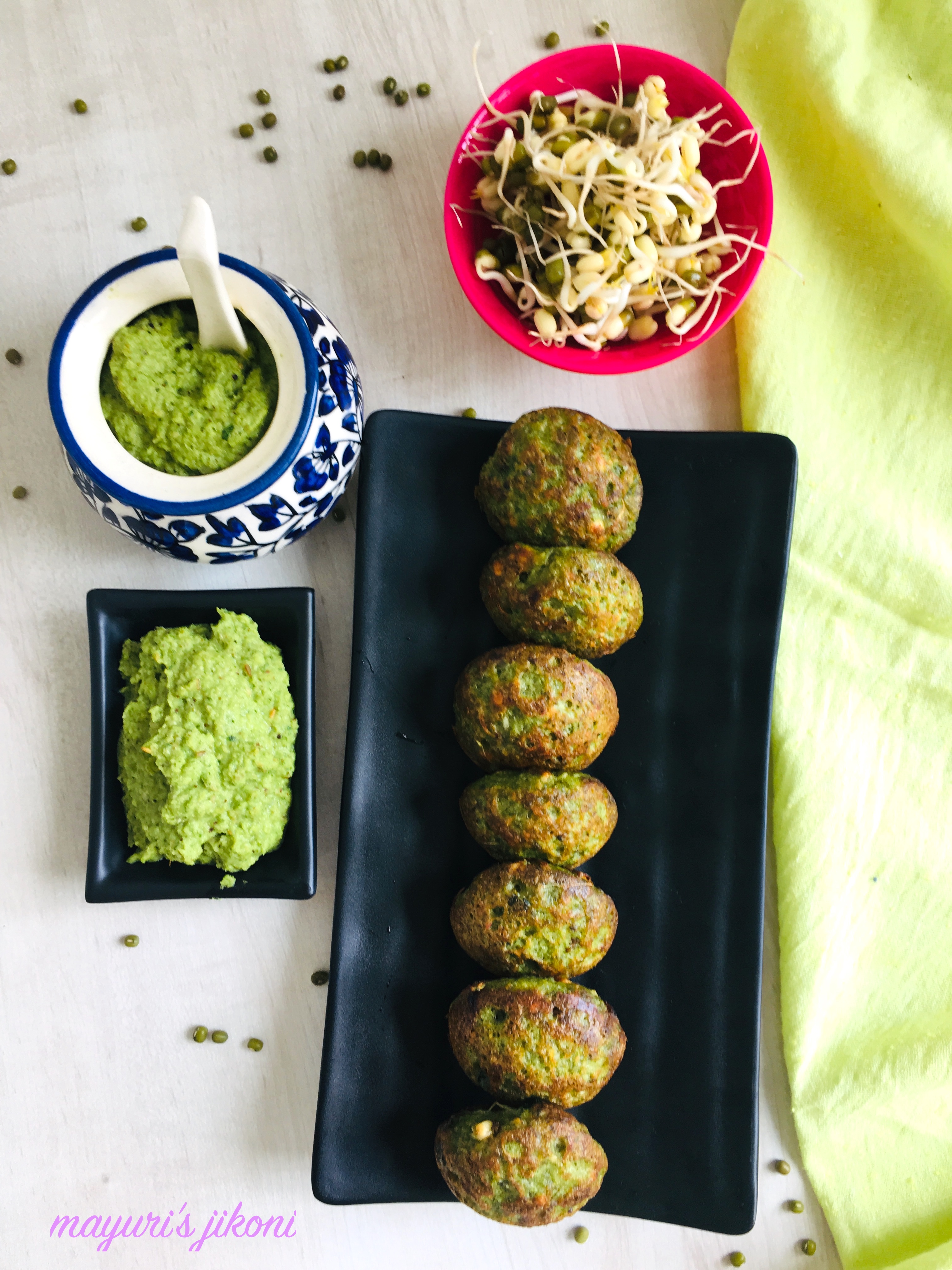 Paniyaram, Paddu, Guliyappa, Yeriappa, Ponganalu is simply a steamed batter made in a mould. Usually a batter of rice and urad dal is poured into the paniayaram pan or appe pan(aebleskiver), covered with a lid and allowed to steam till done. Made either sweet or savory, paniyaram is usually served as a snack any time of the day. The savory ones are served  with some chutney and or sambhar.

Usually made from leftover idli/dosa batter,however these days a variety of lentils and other grains are used to make this lovely crispy on the outside and soft in the inside snack. My first time to enjoy painiyaram was at Farzi Cafe, Bangalore, where paniyaram was served in a mini Indian truck.

What is Moong Paniyaram?

Our theme for this week suggested by Swaty who blogs at Food – Trails suggested that we create magic by using moong. That resulted in me using  moong to make the much craved for paniyaram. I was tempted to use up my left over idli batter and just add sprouted moong but thought of using the power packed beans in abundance to make the paniyaram. As a result,  whole green moong and urad dal were used to make the batter. Added some spinach and sprouted moong along with the required spices. To go with the hot delicious crispy moong paniyaram I made a super yummy Ridge Gourd Chutney following my friend Archana’s recipe. Trust me, hot moong paniyaram will disappear in no time.

Commonly known as Mung Bean, Green Gram or Moong, is considered as a superfood for vegetarians. An integral part of the Indian Cuisine its packed with protein and is low in carbohydrates, making it easy to digest and light on the stomach. Rich in potassium and iron it helps to regulate blood pressure. It contains folate which is vital for proper brain function and in production of DNA. Rich in dietary fibre its helps in digestion. Moong is an important part of our diet at home. I usually use whole moong to make curries like Khatta Moong or Dal Tadka. I love using the split moong dal to make Khichdi, Chila, Dhokla,  and so many other snacks. Moong dal is also used to make a super yummy sweet dishes like Swaty’s Moong Dal Halwa and Paruppu Payasam.

Why include Sprouted Moong in your diet?

As I mentioned above Moong is considered a superfood particularly for vegetarians. Sprouted Moong multiples the benefits to even a larger extend.

How to make Bean Sprouts at home?

These days ready made sprouted moong are easily available in stores and from vegetable sellers. However, I prefer to make sprouts at home as ready made ones tend to be sticky and slimy sometimes.

To make sprouts at home is very easy. 1 cup of moong beans can yield over 3 times the amount of sprouts.

How to use beans sprouts?

Besides enjoying them raw on their own sprouts can be added to soups, salads, sandwiches. I love making Sprouted Moong Salad. Whenever I get fresh radish with fresh leaves I love to enjoy Bean Sprout and Radish Salad, using the raw leaves. Have you tried Xiao Mi Zhou which is millet porridge enjoyed in China? I love adding sprouts to it. Once in a while, beans sprouts find their way into these delicious Sprouted Moong Parathas and a lip smacking Chinese Bhel.

Including bean sprouts in your family’s diet right from kids to elders is important. While adults may enjoy them on their own, kids may not want to. Including them in their favorite foods like pancakes, tots, fritters, idlis, bhajia, paniyaram is a good suggestion.

Here’s one recipe of paniyaram that is enjoyed by all adults and kids with bean sprouts included in them.

As I mentioned above, I made the delicious ridge gourd chutney following my friend Archana’s recipe. However, did alter a few things. For one I didn’t peel the ridge gourd, just got rid of some of the brownish parts. I also added mint and ginger for flavour as ridge gourd on its own is quite tasteless. Thank you so much Archana for the recipe. Some years back if someone were to tell me that ridge gourd and its peel can be used to make chutney, I would have not taken them seriously.

a generous pinch of asafetida (hing)