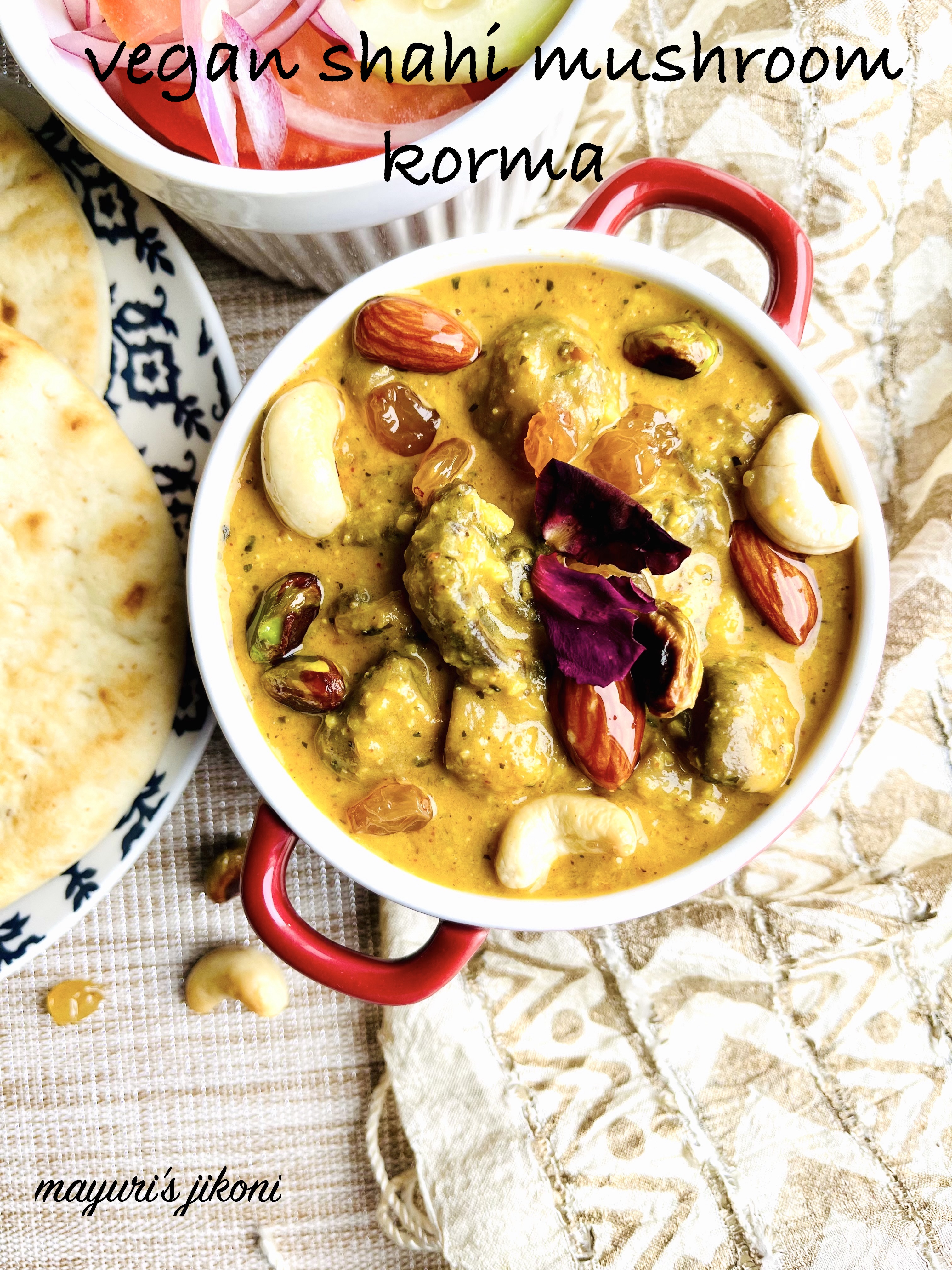 Vegan Shahi Mushroom Korma is a rich, flavourful, aromatic and creamy mushroom curry with exotic spices. The creaminess of this curry comes from the cashew nuts and thick coconut milk. Best to enjoy this Vegan Shahi Mushroom Korma with some naan, rotis, parathas or rice. Korma are usually not very spicy, therefore allowing the flavours of other spices to come through.

Every week my blogging scene is a bit like the following:

When I’m in Mombasa I usually have the dish ready before Saturday as usually hubby and I go to our beach apartment to spend the weekend.

The group decided to prepare a dish from the Mughlai Cuisine as our 67th theme. Must admit that till now have enjoyed rich curries, kebabs, pulao and biryanis but now knowing exactly from which cuisine of India or which part of India it originates from. So the research on the Internet began.

What Is Mughlai Cuisine?

Mughlai cuisine is basically food prepared with a variety of aromatic spices varying from slightly mild to spicy. This cuisine was introduced to India by the Mughal Empire. It is believed that when they came to India, they were not happy with the food prepared locally and they introduced a lot of spices, nuts, fruits and cooking methods.

Mughals being Muslims, most of the dishes were meat based and some vegetables were added to enhance the preparation. Most of the dishes are either of Turkic or Persian origins. Mughlai food basically consists of main dishes accompanied by side dishes. Biryanis, kebabs, kormas (qorma), koftas, naans are a part of the Mughlai cuisine.

Compared to other cuisines of India, Mughlai gravy dishes are rich in spices, nuts, dairy products, thick and creamy. Vegetables and paneer were introduced into the Mughlai cuisine to suit the vegetarian palate. That does not mean that the Mughals didn’t have a palate for sweets or desserts. Most famous Mughlai dessert or sweet preparations are Shahi Tukra, Sheer Korma, Falooda, Kulfi, Anjeer halwa to name a few.

I decided to make Vegan Shahi Mushroom Korma for this theme. So what is korma(kurvama, qorma,kurma, khorma)? Basically the meat is braised(cooked at hight heat dry or with liquid) and then added to the gravy and cooked over low heat. A mixture of spices are added to the korma along with yogurt and cream. Once the dairy product is added, the cooking temperature is controlled so that the cream or yogurt does not curdle. Shahi means royal and the dish is rich with cream, nuts, saffron, dried fruits.

Being a vegetarian I decided to make the korma using mushrooms. Following the same recipe one can replace the mushrooms with mixed vegetables, paneer, kofta, etc. As my preparation is vegan, I’ve replaced the cream/yogurt with coconut milk. Thickness of the korma depends entirely on your preference but usually Mughlai curries are not watery.

What do I do if the korma appears watery?

If you’ve added more water by mistake, you cannot burn it off without altering the texture the vegetables. Therefore, best to add some cashew nut or almond flour to it.

Some Of The Mughlai Dishes My Family Loves:

Mughlai Egg Curry, usually paired with Qubani Naan.
Gobi Musallam with some methi naan
As dessert we love our Badam Kesar Pista Kulfi. Especially during Eid we do not miss a chance to enjoy Sheer Khurma.

The Group Foodies_Redoing Old Posts, started by Renu who blogs at Cook With Renu. This group helps the members to make an effort to update old posts. This is our 72nd  one. This time am updating Vegan Shahi Mushroom Korma. The recipe remains the same but I’ve updated this post with more structured write up, better photos and a video.

Check out my You Tube Channel MAYURI’S JIKONI