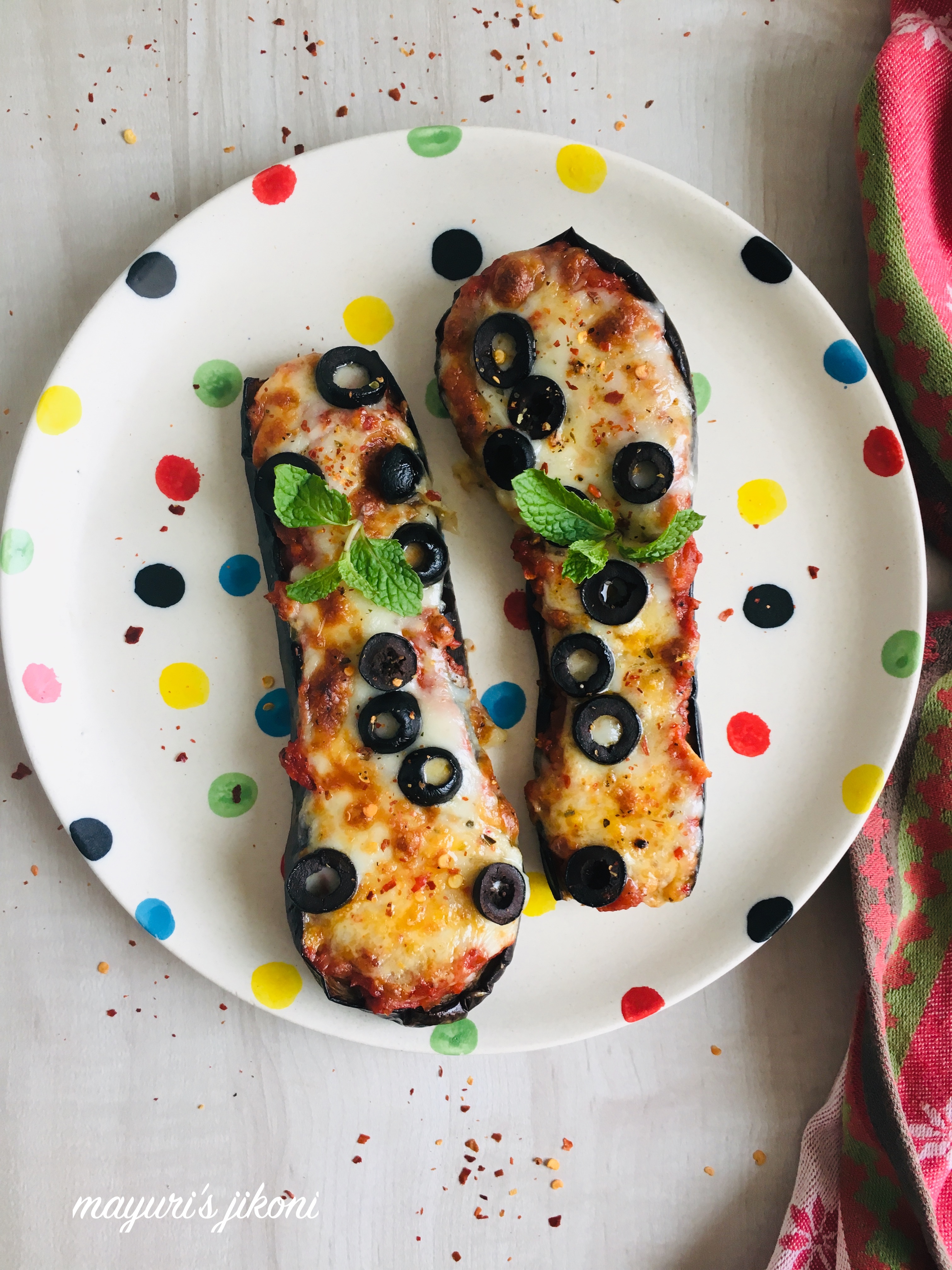 During my holiday to Italy, I was a bit disappointed that the choice of food for vegetarians was very limited. All I could think of was Margherita pizzas, pasta with tomato sauce, pasta with mushrooms or cold grilled vegetables. However, mostly  it would be grilled eggplants, zucchini and pepper. No garlic or onion flavour and forget about getting any chilli flakes. I seriously wouldn’t have complained if  they would have served Eggplant Mini Pizza. Pizza hut and Dominos spoil us by giving us endless satchets of chilli flakes. Italian restaurants in India and Kenya give us chilli oil, yummy chilli sauces, pestos that are chilli. However, visit any restaurant in Italy and its difficult to find any of those extra condiments… no extra olive oil, chilli oil, chilli flakes, salt or pepper! Since were with a tour company Cosmos, they chose the restaurants we would dine at and hotels we would stay at. Most of these hotels didn’t serve fresh fruit which was really disappointing. If one wanted to have fruit it was the canned one. During our tours hubby and I would try and buy fresh fruits that were sold as street food, enjoy a slice or two of the pizza and had tonnes and tonnes of  gelato.

Once we got back to Mombasa, I vowed not to buy eggplants for a very long time. I was just fed up of nearly a whole month of eggplants. However, that vow was short leaved. Dear Esther, who brings vegetables daily to my door step eagerly showed off lovely huge eggplants. I didn’t buy them. Second day, she appears with eggplants again. Protested that she was not bringing anything else besides eggplants. Third day I gave in. To get back the taste of eggplant as I know it I prepared my usual brinjal potato shaak (eggplant and potato curry).

What can you make with eggplants?

Eggplants, aubergine or brinjals as they are called are high in iron, have good dietary fibre and are full of vital vitamins and minerals. Its common to find that eggplants feature a lot in the Indian Cuisine. Hubby loves baigan bharta which is a mashed up brinjal curry and we enjoy it with some hot roti. I love having baigan raita which is an eggplant and yogurt salad during the hot summer days. Have you tried a Roasted Eggplant Dip? It goes so well with crackers, pita chips or even tortilla chips. Don’t want a mashed up eggplant curry, then try out this South Indian style Chidambaram Gosthu.

Why did I make Eggplant Mini Pizza?

After all the sweet delicious, hard to resist pastries and bakes, all the gelato we had and yes the pizza slices from the street vendors, hubby and I had gained a few pounds and were trying to get back into shape. Not that I’m any ideal shape, but that’s another story. After a few days had a craving for pizza. Still in the mood of eating healthy, I  thought that just one slice of pizza will do no harm. Much to my horror, one slice of Margherita Pizza is 290 calories. With toppings the calorie count goes up. A whole thin crust pizza with which is about 8-10 inches contains anywhere between 1200 -1400 calories. Up cropped the idea of using eggplant as the base (had seen clicks on Pinterest) and voila we satisfied our craving for pizza.

A bit about Pizza

Pizza actually originated in Naples as a poor man’s meal where the bread was topped with tomato puree, meat and cheese.Since then pizza has become an international dish. The Italians believe that the typical pizza with tomato (red), basil (green) and mozzarella cheese(white) represents the Italian flag, just as Queen Margherita preferred. Thus the name Margherita pizza in her honour.

A Must Stay At Place in Rome

After our touring with Cosmos got over, we had a couple of days on our own in Rome. We had booked a room at Relais Il Casale, Ostia Antica. Its a beautiful agri touristic place with lots of greenery around. The cottage like rooms are tastefully decorated and cozy. The owners, a husband and wife team, are very friendly. By the time we reached the place it was pretty late and the chef had left. However, the owner was able to bring a plate of food for us from an event that was taking place in their reception area. Next day we were leaving in the evening to catch our flight back to Kenya and they wrapped a ciabatta sandwich for us to have on the way! Weekends are pretty busy as locals from surrounding areas come to relax and enjoy barbecue Italian style. Around the barbecue place, they have an antique oven which apparently was used by their forefathers to bake pizza. They also have a working  antique hand pump where one can draw water from the well. Unfortunately, the photo didn’t come out good at all.

Let’s get back on track

Eggplant pizza is a fun and healthy way to enjoy the flavors of a pizza without any guilt. I like to make the Marinara Sauce at home. Come to think of it, its so easy to make this delicious sauce at home. As for the toppings, let your imagination run riot. I sometimes add cherry tomatoes, cubed paneer, only olives, mushrooms, actually whatever is available.When I took the photos of the Eggplant Mini Pizza, I had used only olives.

Go on try out this easy, guilt free pizza recipe.