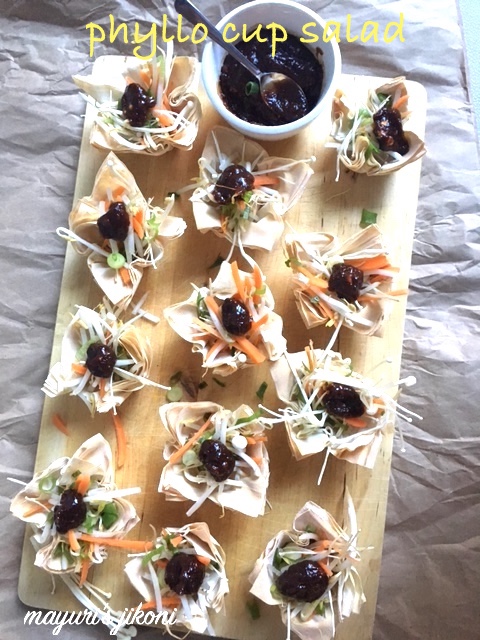 Phyllo Cup Salad is a fun and innovative way of serving an appetizer or starter. While, one can choose any filling of their choice, I have used mung bean sprouts, enoki mushrooms, spring onion and carrots as a salad filling. And as the dressing have used homemade Peanut Sauce.

One can easily add cooked tofu, meat, seafood or other vegetables to make this delicious and fun salad.

This is a group where enthusiastic food bloggers have come together to prepare protein rich dishes in 30 days. I’ve opted to share vegetarian protein rich dishes. Today is Day 20th.  My star ingredients for the protein are sprouted mung or moong beans and enoki mushrooms. A bit comes also from the peanut butter used for the sauce. 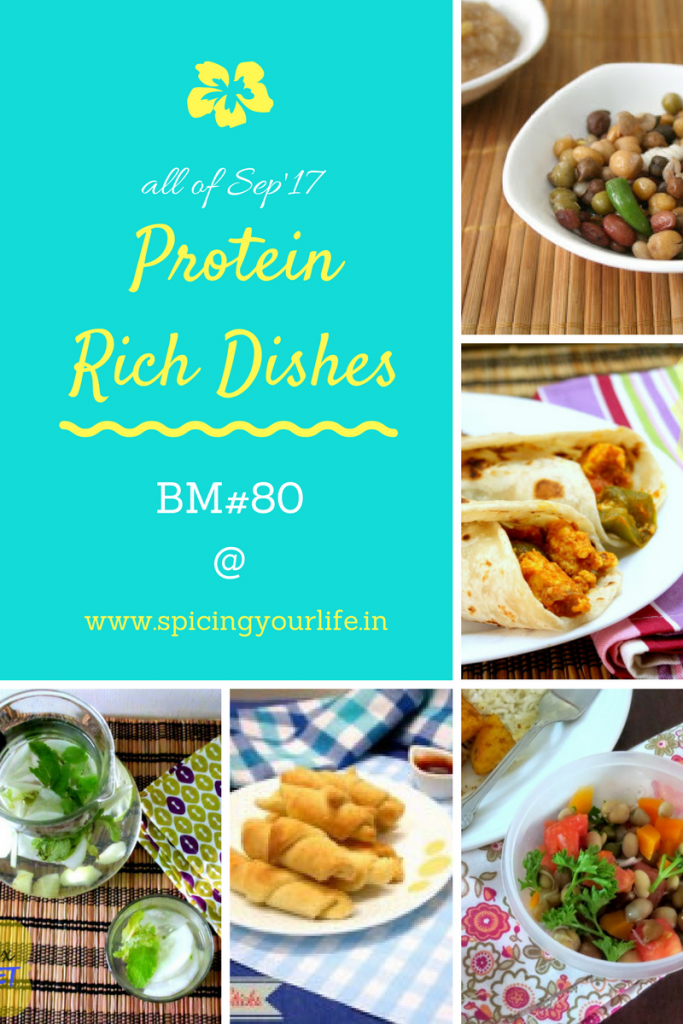 By no means am I claiming or supporting any sort of fad diet that are the latest craze in the fitness world. I’m just trying to include non meat non fish dishes from which you can get your protein source.

What Are Enoki Mushrooms?

Enoki Mushrooms are long thin stemmed mushrooms with tiny tops.They are mostly sold in bunches and look so pretty. Generally used in Chinese, Japanese or Korean cuisines, they are a rich source of fibre and protein.

Enoki mushrooms can be consumed raw or cooked. Also known as Lily Mushrooms or Golden Needle Mushrooms, they have a mild, nutty and slightly fruity flavour. They tend to be a bit chewy and crunchy at the same time.

Some More Recipes With Mung/Moong Sprouts

Well, must admit, initially I was planning to just mix the salad ingredients and serve it in a bowl. The phyllo pastry in the fridge was drying up. So I thought if I can serve Phyllo Cheesecake Cups then why not a salad.  I am so glad I served the salad in baked phyllo cups as hubby and my son really enjoyed them. Baking phyllo cups is not complicated at all.

As I mentioned above, add any filling of your choice. If the filling is wet, add it just before serving so that the cups don’t get all soggy.

Generally available in supermarkets. Will definitely get it from any Middle Eastern Grocery Store. Not available readily in India or Kenya. When working with phyllo pastry make sure you keep it covered under a damp cloth as it tends to dry up very quickly. I used half a box or you need 5 sheets. Use a sharp knife or pizza cutter to cut them into squares measuring about 4X4 inches. Cut at least 3-5 sheets together. Using one is difficult to handle and too thin.

I have used ready made bean sprouts which are available in most supermarkets or green grocers. If you use home sprouted beans, then you may need to steam or stir fry them a bit. Having said that, I like eating raw home sprouted mung.

If you don’t find them at your local supermarket then you will find them at any Chinese, Korean or Japanese store. Can replace Enoki mushrooms with any other mushrooms of your choice. Chop them and stir fry them. Chop off the root part completely. Wipe the mushrooms gently with a damp cloth to remove any soil. Separate the mushrooms slowly. I used a handful of them for this recipe.

FOR THE PEANUT SAUCE:

PREPARATION OF THE PEANUT SAUCE:

PREPARATION OF THE SALAD:

Check Out What Other Members Made On Day 20