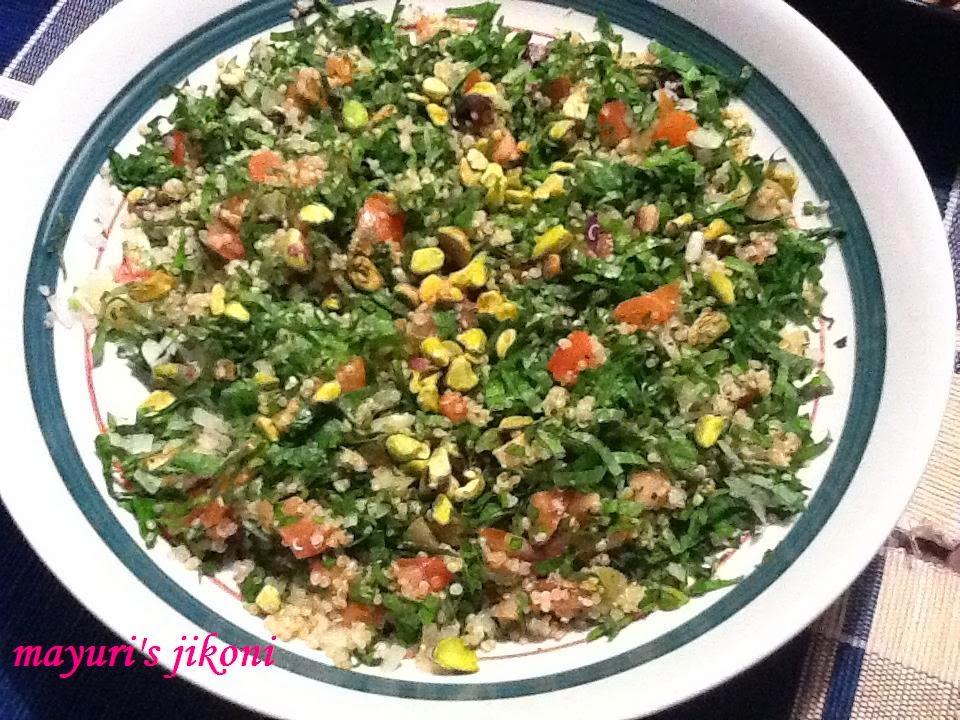 a huge bunch of flat parsley!

There are loads of recipes all tried and tasted but need to be blogged. I got really busy with shopping, wedding preparations, Lionism and recuperating. 3 more months to go for the wedding day. I have loads of things to do and very little time.
During our visit to Montreal, one fine day, I got really busy in the kitchen and Ajay my hubby dear volunteered to help with the shopping. So I handed in the list and continued with my work. I was eagerly waiting for fresh coriander or cilantro as its called in that part of the world and he comes smiling into the house with a huge bunch of some leafy greens and tells me how fresh the dhania are in the supermarkets in Montreal. I remove the leafy bunch from the bag and it turns out that its not exactly coriander but the cousin, flat parsley! Flat parsley with normal Indian vegetables ummmm…. not really as it does have a strong taste. So the bunch goes into the fridge for later use.
Next day, the bunch only reminded me of tabbouleh or nice parsley butter. Made both but had to make a version of the tabbouleh using quinoa. Yes, Neel’s pantry was filled with quinoa. Parsley butter was used up in cooking continental types of dishes but the quinoa tabbouleh salad was refreshing and filling. I want to make it again, here in Mombasa, but first need to look for flat parsley. If i don’t find any, I may just have to settle for fresh coriander.Till then you can enjoy this recipe.

Preparation of the quinoa:

Preparation of the dressing:

Mix all the ingredients and whisk it well.
Preparation of the salad:

Add the vegetables, olives and nuts to the quinoa. Add the dressing and mix well.

Serve immediately or cover with a cling film and let it cool in the fridge before serving.

Sending this recipe for the following events:

Turmeric Yogurt Salad Dressing is a creamy and del

This Night Scene I’m going to miss so much when

Buttered Masala Sweet Corn is an easy to make supe

Theme 25 is DIFFICULT. So difficult to resist choc

For the 23rd theme Chandelier I had to share this

Your Country is the 21st theme and I proudly prese