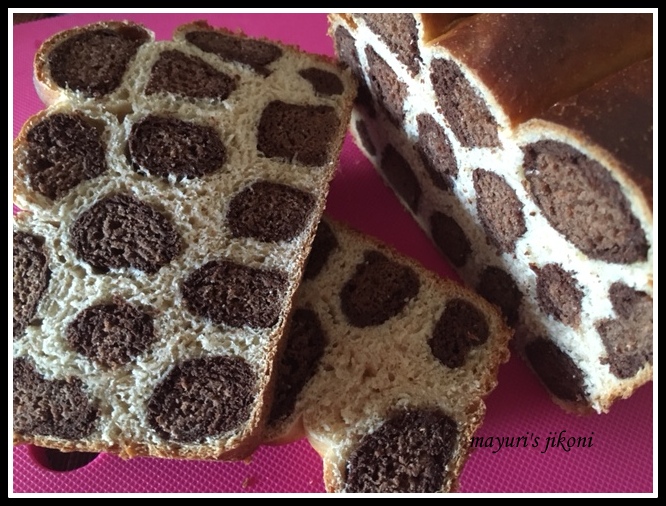 There’s a leopard in my kitchen!

When Aparna suggested a leopard patch or leopard spots bread for our March challenge in We Knead to Bake group, I felt right at home. Leopards are not new to me, as I have seen them in the National Parks and at the Animals Orphanage in Nairobi. Years ago it was pretty easy to spot these animals in the parks but these days its pretty difficult because of poaching. Leopards are different from cheetahs. Leopards are nocturnal cats while cheetahs are diurnal. Leopards have shorter legs and more stockier whereas cheetahs have long legs and are slender to enable them to run fast. Now coming to the spots, cheetahs have black spots all over. Leopards have spots that are brown in the middle and black at the edges and are always in clusters, more like rosettes.
This monkey thought the Leopard’s spots
Were pasted on for polka dots.
He asked how much it would cost
New ones to buy if the old ones were lost.
I remember teaching the little ones in my class the above silly poem by Spike Milligan whenever we had a jungle theme.
Coming to the bread, getting the right shade of the light and dark brown was difficult as I don’t have black edible colour. Mixing the cocoa into the dough by hand took a bit of time as I had to knead it till there were no white patches showing. Yes, had to do the task by hand as the power disappeared. Overall, it was fun making this bread.