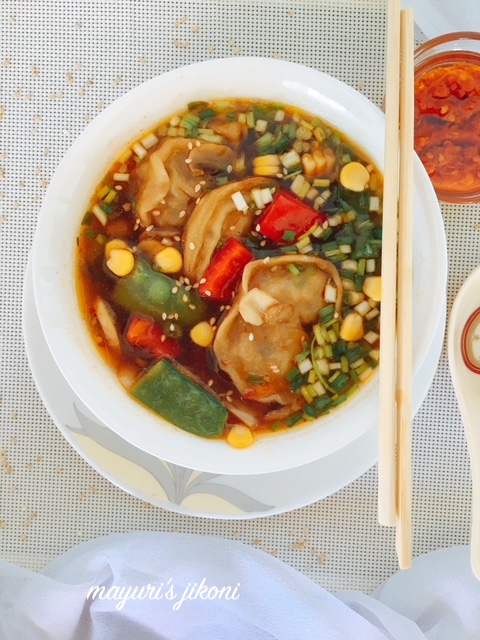 Our visit to Nepal many years ago was a memorable one. I loved the country and the people were very friendly. Though we had gone there in the month of April, it was freezing cold. The place we stayed at had a very small basic kitchen. No fancy food was available there. Our first meal was momo soup.” What is momo?” I asked the cook. He brought out a bowl of soup and showed me the momos. I thought, is that all we get for food? However, once I got my veggie momo soup, I wanted some more. It was filling, warming to the heart on a cold chilly day and delicious. For nearly a whole week, momo soup was my dinner.
Momos basically resemble dumplings, wantons, pot stickers or dim sums. Momos(steamed bread) was introduced by the Chinese to the Himalayan countries of Nepal, Tibet, Bhutan and slowly became popular in the North eastern states of India. As the north eastern population travelled to the other parts of India, momos became more popular. Momos can be fried, steamed or cooked along with soups. Making different shaped momos is an art. I came across a recipe for momo soup on my diverse kitchen. Memories of Nepal came back and I had to make the soup at home. I changed the recipe quite a bit to suit my taste and on the availability of ingredients. So please feel free to play around with the ingredients.

Since the first time when I tasted momos in Nepal, I’ve had them umpteen of times in India. Its caught on popularity as a famous Street Food in every Foodie Street of India. Mostly you get steamed ones on the street. The fillings vary from meat ones, veggies to paneer, yes paneer ones and they taste awesome. Hot steaming momos served with a dipping sauce and you’ve had a healthy filling meal.

I still love my momo soup as a wholesome meal. The vegetables keep on varying depending on what is available. I have become more adventurous with the stuffing too, but leaving the original recipe as a guideline. I’ve sometimes added steamed rice to the stuffing along with veggies, have added tofu, paneer, mushrooms etc.

a generous pinch of baking powder

4 cloves of garlic, peeled and sliced

Preparation of the filling:

To make the momos:

Preparation of the Broth:
Tips:

You may want to check out the following Indo – Chinese Recipes: