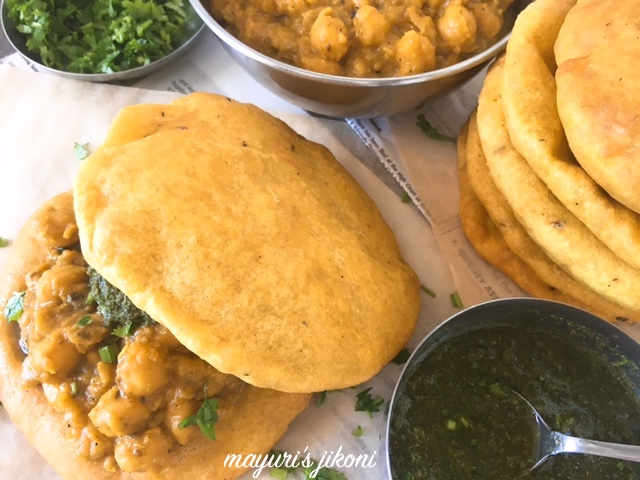 THEME: SURFING THROUGH THE CARIBBEANS

What are Trini Doubles? Unique name but it tastes amazing. At first you may think that this is Chole Bhature (famous in Indian cuisine). However, it tastes different and the flatbread too is prepared differently. Having said that, most of the popular dishes in Trinidad are of Indian origin. Not surprising, as half of the population there are of Indian origin. Doubles is a famous street food enjoyed mainly as breakfast. But that doesn’t stop Trini people enjoying it as a snack or even as lunch.Doubles was first created in Fairfield, Princes Town by Emamool Deen (a.k.a. Mamudeen) and his wife Raheman Rasulan Deen in 1936.

What do Trini Doubles consist of?

It basically consists of puffed up bread called bara filled with curried chickpeas or channa and chutney. The filling or channa is usually spicy because scotch bonnet is added. As I don’t get scotch bonnet here, I just used normal chilis. Chutney is made from chandon beni(bhandhania) a local herb or with other green chutneys, coconut chutney or the famous pepper sauce. Doubles is wholesome, filling and fits in your palms. Some serve it with double bara or bread or the stuffing is placed on a big bara and folded much like a taco. Check out this song on Doubles by Kenneth Supersad.

Our Prayers are with you

When the theme Surfing Through the Caribbeans was decided, we never thought that a natural calamity would literally surf through the Caribbeans. Hurricanes Irma and Maria have caused catastrophic damages to some of the Caribbean islands. Hurricane Maria followed Irma within 2 weeks barely giving the inhabitants of these islands time to get back to normal. It will takes years for some of these islands to get back on their feet. However, our well wishes are with them as many have come forward lending time and money to rebuild these beautiful islands.

A bit about Trinidad and Tobago
For the next 3 days I will be cooking some dishes that are very much a part of their daily meal in some of these Caribbean Islands. My first stop is the Republic of Trinidad and Tobago, the twin islands. Famous for its carnivals, the birthplace of calypso music and steelpan. Ruled by Spanish, Dutch, French, and British before gaining Independence in 1962. After the Slave trade was abolished the colonists got East Indians, Tamils, Chinese, Portuguese labourers under the indentureship contracts. Thus Trinidad and Tobago has a diverse culture. This is also noticeable in the food where a herb like thyme is easily mixed with  turmeric or coriander powder to give the local dishes its unique taste.
Street Food from Different Cuisines

Ram Ladoo – famous from the streets of Delhi

Mangonada/Chamango– a summer drink from Mexico

Zege– an omelet with chips/fries from Tanzania

FOR THE CHANNA CURRY