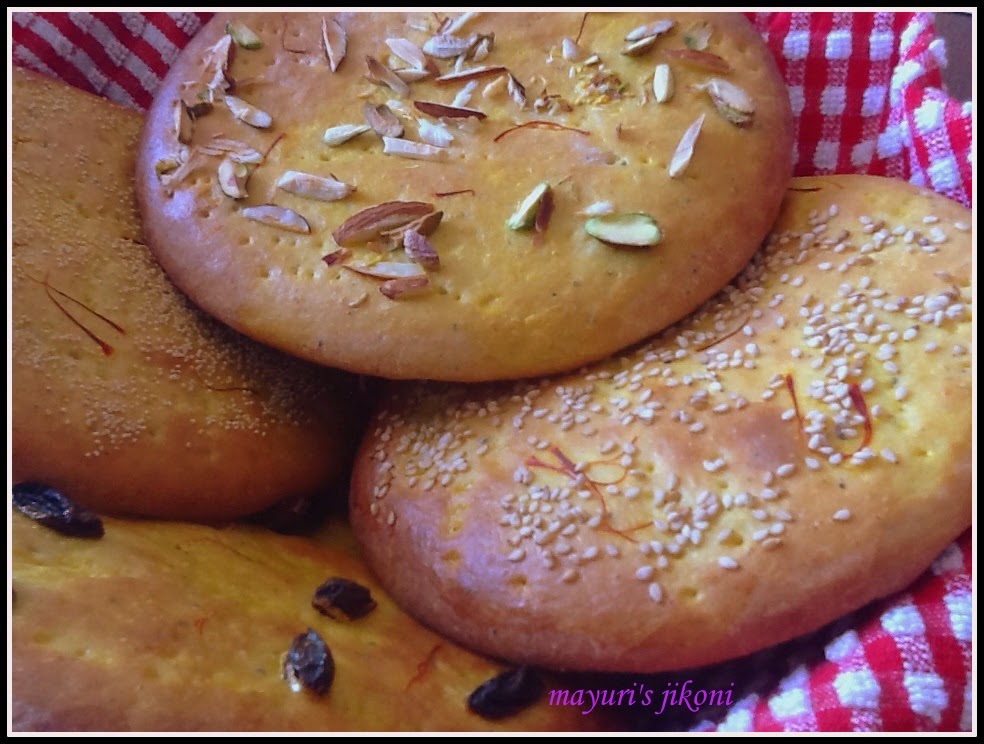 Aparna of My Diverse Kitchen chose Sheermal for our group We Knead to Bake for the month of November. Had I heard of sheermal before? Yes, but and I had written it down to try it out. I had come across the recipe for sheermal by Tarla Dalal and Sanjeev Kapoor. So when I went through the recipe that Aparna gave us, I was pretty excited Finally I was going to bake Sheermal. In the meantime other members had already baked it and shared a few of their experiences. Most of sheermal photos sent to our facebook page looked so perfect, delicious, well baked and rich.
I made mine today. I must admit that I had totally forgotten that we had to post the recipe today on our blog. I had presumed that I still had till the end of the month. A gentle reminder from Aparna, made me sit upright. So early in the morning the dough was kneaded and by lunch time hubby dear had lovely sheermal with corn curry.
What is sheermal? Well, sheermal, seermal or shirmal is a flat bread much like the naan made of plain flour and milk and saffron. Its presumed that it originates from Persia and is now baked in the tandoor, tawa or oven in most areas of Pakistan, Bangladesh, Iran and India. In India it probably was introduced during the Mughal period or brought down by the Persians. It was mostly prepared in Lucknow during festivals and for royalty banquets.Nowadays its a part of the Hyderabad, Lucknow and Awadhi cuisines.
Sheermal is eaten on its own with tea or with curry. The topping besides the saffron infused milk can be anything from poppy seeds to almonds. While I was baking this bread, my whole house was filled with the scent of cardamom and saffron. Most recipes add rose water or kewra. I didn’t have either so I added cardamom.
Here is the recipe for the soft, rich textured and delicious flat bread.

Tips:
You may want to check out the following:

We Knead to bake