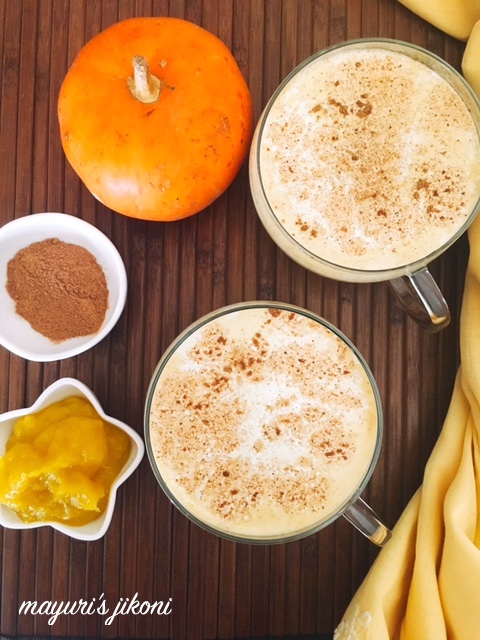 Bangalore cannot make up its mind weather wise. Its cold sometimes and hot over days. We are in the winter month and its not as cold as it used to get some years back. However, I’m not really complaining as I’m enjoying the weather. Yesterday was one of those chilly days and just the right time to have a hot comforting drink. Usually a hot cup of spicy tea does the trick. However, I made Pumpkin Spice Latte to ward off the cold. A hot drink cupped in our hands and watching a ‘girlie movie’ was a Sunday well spent.

The coldest weather I’ve ever experienced is 0°C in Chandigarh and at Lake Louise, Alberta. Both experiences were totally different. When hubby and I went to Chandigarh we didn’t know that it would be so cold. I’d wear my leggings and jeans, a vest, top, sweater and a shawl. At night once I was under the thick quilt, I didn’t want to move even an inch in case the cold air got in! The tiny heaters that the hotel provided were not really that useful. The room was stone cold. However, the sun during daytime made up for the cold nights.

Though it was the autumn season, temperatures in Alberta were low. Hubby’s cousin and her family decided to take us to see Lake Louise. It was so cold but this time round we had proper warm clothes. We had my first ever winter picnic, hot tea and theplas at Canmore by a river. The water was ice cold and my teeth kept on chattering.  From there we went to Lake Louise. It is surrounded by Canadian Rockies. Its a breath taking place, absolutely beautiful. My nose was really cold and my eyes were watering. The family decides to hike up the Rockies. I hardly walked for 5 minutes and got the feeling that I could not breathe at all. I had to come down, sit in the sun and catch my breath. I just felt as though the cold air was just too thick. Wearing heavy warm coats is something one needs to practice. For a girl who doesn’t even need a sweater in Mombasa, the extra thick coat was just too stifling for me.However, that is not going to deter me from spending one winter in Montreal in the near future.

A few years back when I visited Montreal during the autumn season, I tasted pumpkin spice latte for the first time. It was from Starbucks and  I found it just too sweet. But what I liked was the creamy thickness of the hot drink and the spice blend. I mentally noted that I should try the latte at home with less sugar and no cream. Starbucks has a tendency to give you half a mug of the drink and the rest is filled with mile high whipped cream.

Mombasa weather doesn’t exactly warrant a hot comfy drink as we hardly ever get chilly cold weather. Its hot and not so hot… that’s it. Even during the rainy season it doesn’t become cold. When Priya of The World Through My Eyes   suggested the #120th theme for FoodieMonday/Bloghop as Winter Recipes, I immediately knew what I wanted to make. The vegetable man who comes twice a week to sell veggies and fruit at our society had these really cute tiny pumpkins which I’ve never seen before. I’ve seen huge ones but cute little ones…. first time.  So the urge to use these cute pumpkins and the reminder of the spicy latte was like the stars were aligning in the correct position.

I made the pumpkin puree and the pumpkin spice at home. Its pretty easy to roast the pumpkin in the oven and then scoop out the flesh instead of trying to battle with the thick skin with a peeler or knife.

Tips:
You may want to check out some winter recipes:
Sending this recipe to the following event: