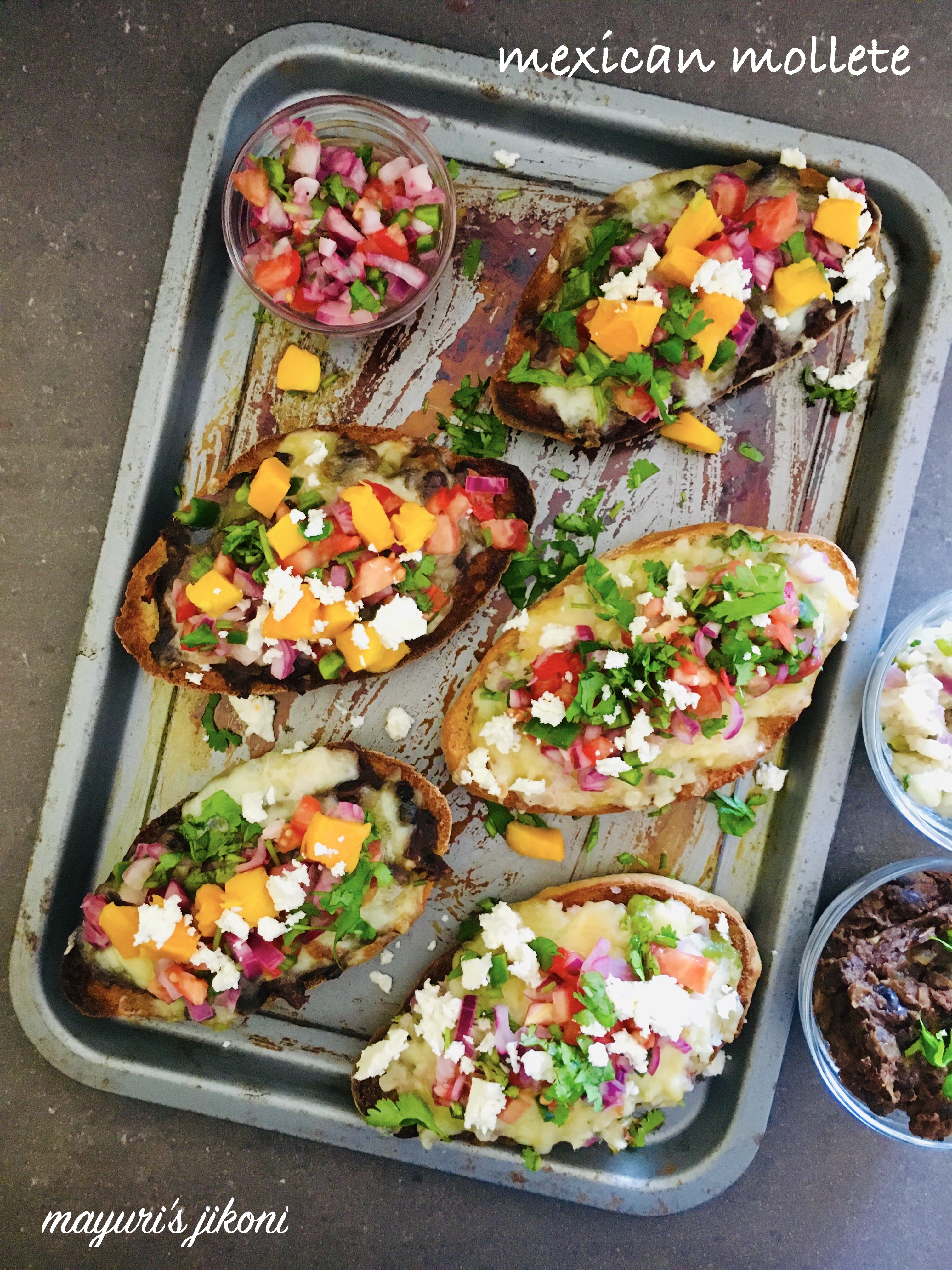 What is Mexican Mollete?

Before we go into any other details let’s get the explanation of what is a Mexican Mollete out of the way. Basically, we all know that Mexico was colonized by the Spanish. So technically the word Mollete is Spanish word for a type of bread. However, in the Mexican Cuisine its an open faced sandwich. As we all know that the Spanish do not pronounce ‘LL’ as we do in ball. Double LL becomes Y. Therefore Mollete is pronounced as Mo – ya -te.

Authentic Mexican Cuisine followed by the Mayan Indians was healthy and nutritious as they believed in living off the land. Using naturally found ingredients like beans, corn, peppers, some fruits like avocado, guavas, mangoes, custard apples, peppers, tomatoes and chocolate. Commonly, meat from chicken, duck and turkey was used. Also cacti flowers and pads(stems) too are a part of the traditional cuisine. Tortilla (tor -ti-ya) was back then and still is the most common flatbread used.

Mexican Cuisine as we know it today

In reality, the Mexican Food or Cuisine as we know it today is a multicultural blend of Native American, European, African, and Caribbean influences. Animals bred for food like cattle, sheep, pigs, spices, confectionery goods (dulce), cheese were brought to Mexico from Europe. Rice was introduced from Asia and plantains from the Caribbean. The extra yellow cheese loaded, canned vegetables, wheat flour, nachos laden dishes, is actually part of Tex Mex Cuisine. With International influence in all world cuisines, there is a fine line between Mexican and Mex Tex food.

Members of this group give their partners two secret ingredients according to the theme decided and prepare a dish. Once the dish is ready we add the photo only and other members try and guess the secret ingredients. Towards the end of the month the secret is revealed when we share the recipe link. This month’s theme Mexican Cuisine  was suggested by Narmadha who blogs at Nams Corner. Narmadha’s blog has both Indian and International dishes which are easy to follow and fun to make.Check out her kids party ideas.

As I mentioned above, this group is all about partners. Again we were an odd number of participants so for this theme my partners are Priya VJ and Sasmita.

Priya blogs at Sweet Spicy Tasty. If you are looking for Jain recipes then you’ve got to check out Priya’s blog. I’ve bookmarked her Gasgasse Payasa (Khus Khus Kheer) to try out as I’m a big fan of anything that has poppy seeds and coconut in it. Priya my main partner, gave me corn and tomatoes to include in my dish and I gave her paprika and beans. With those two ingredients Priya made delish Mexican Bean Rice.

Sasmita blogs at First Timer Cook. If you look at her recipes and what she makes from traditional Odia food to desserts, you will definitely not think of her as a first timer cook…she is an experienced cook. I don’t get Pointed Gourd here in Mombasa but when I’m in India next, definitely want to try her Odia traditional Potala Rasa recipe. I gave Sasmita onion and pepper powder as her secret ingredients. Using those ingredients she prepared Mexican Corn Fritters.

Mexican Dishes you may want to check out:

Actually, I’m a huge fan of Mexican Dishes. My first ever dish Tacos was prepared when I was just 18, using Tarla Dalal’s recipe. when my kids were growing up, I prepared vegetarian Mexican food often as that was a good way of getting them enjoy salads and have their most loved ingredient cheese included in them. Hubby complains that now the kids are not at home, I don’t make Mexican Food enough. I should as all my clicks need updating.

The Mexican style open faced sandwich is usually made using Mexican Bread Bolillos. I baked the bread before making Mollete, recipe for the bread will be on the blog soon. The topping is usually leftover refried beans,  cheddar cheese and sometimes bacon, chorizo, etc are added. Mollete are served with queso fresco and Pico de Gallo. However, one can add any other toppings like avocado, mangoes, green salsa, eggs, etc.

I made two varieties one with refried beans as the topping and the other with white corn and roasted poblano.

FOR THE REFRIED BEANS:

FOR THE CORN TOPPING: