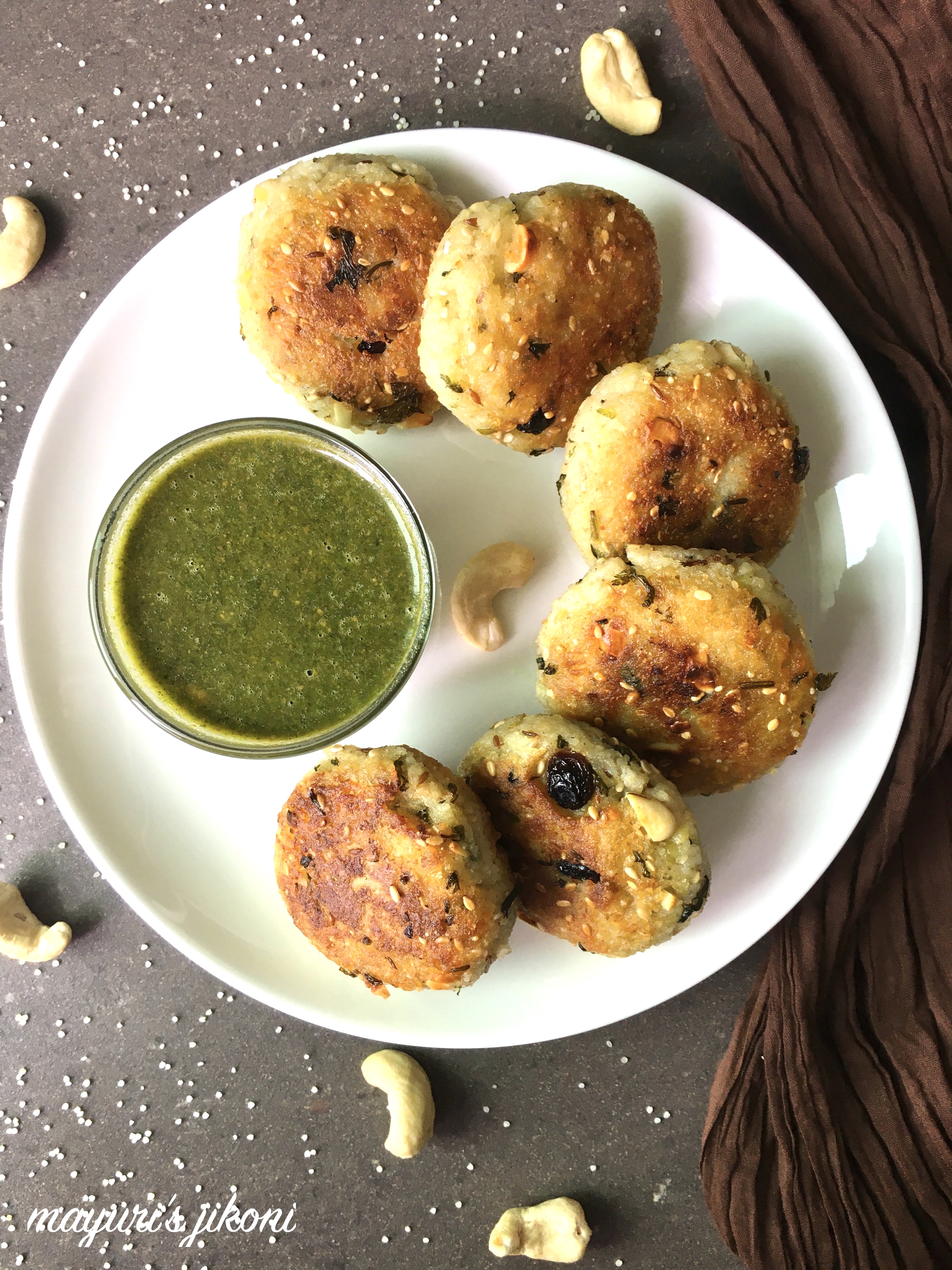 This week’s theme FARALI FARMAISH  has been suggested by Kalyani who blogs at Sizzling Tastebuds. Kalyani’s guideline for the theme is pretty simple –  prepare a dish that our family enjoys during any fasting day. And let me tell you if you were to go from north to south, east to west in India, you’d probably land up fasting everyday as there are so many fasting days. Kalyani’s blog largely focuses on vegan and healthy dishes. Having said that, it doesn’t mean she doesn’t have recipes for desserts, bakes and Indian sweets.

For this week’s theme I made Samo Tikki or Barnyard Millet Pattis. A good way to use up leftover samo (sama, moriyo) khichdi which we so commonly make for fasting days.

Ever since I was a kid, there were only two main fastings in our family, the Jaya Parvati Vrat whereby girls kept a 7 day fast for good husbands and the fortnightly Ekadashi fast. More than procuring a good husband, the Jaya Parvati vrats were followed because of the different nuts and dried fruits that my mum would give me in a nice home stitched silk potli. It was also easy as all my friends too fasted.

When I got married, the only fast observed by my hubby’s family was Ekadashi. There are so many other fasts that the Gujarati community follows but the belief was that Ekadashi fast is way above the rest. By no means am I a religious person, but God fearing yes. I don’t follow certain traditions blindly and stick to the ones that I believe in. For example, I remember my aunt telling me that if I didn’t follow the sitla satam fasts all my kids would come down with chicken pox. But then isn’t chicken pox a part of growing up? We all get it at some stage of our childhood.

What is Ekadashi Fasting?  Also known as Agheeyaras, Ekadashi in Sanskrit is 11. Every 11th day of the lunar calendar, meaning that in a month there would be two 11th days. On the first 11th the moon is waxing or  growing and the second half the moon is waning or shrinking. These two days are considered spiritually important by the Hindus and is observed by full or partial fasting. By this I mean whereby no grains, pulses, beans are consumed. Root vegetables, fruits, pumpkins, dairy products like milk, paneer and yogurt, herbs etc can be consumed. Its best to fast the whole day consuming only water. However, if that is not possible then the above mentioned foods can be eaten. When my kids were young my mother in law would encourage us to make Ekadashi fun by making different kinds of food. That way the kids felt they were getting a special treat and loved fasting. While grains and pulses are not allowed, one is allowed to use samo,(sama, barnyard millet, which by the way is not considered a true millet), buckwheat, tapioca balls (sabudana), amaranth (rajgira)and water chest nut (singhada) flours.

When the whole family was together, cooking on Ekadashi was like preparing a feast as we had to take care of everyone’s taste and favorites. Make they favorite and they will fast happily is the motto my mother in law and I adopted. As of today, do my sons keep the fast? No they don’t, y daughter does occasionally and hubby and try to keep whenever possible except when we are traveling. With just the two of us at home now, Ekadashi meals are much simpler now. Hubby enjoys samo khichdi, potato curry and a glass of chaas. We try to consume fasting salt or sendha namak only once so evening time its usually fruit or a glass of milk.

Last Wednesday was Ekadashi Day and it would have been the usual meal mentioned above, but because of the theme, I decided to make a long forgotten snack.  I would purposely make more samo khichdi so that in the evening I could serve the family some samo tikki or barnyard millet pattis. My kids were not very fond of samo khichdi but they would devour the tikki with some yogurt. So for the Ekadashi that just went by informed hubby that I am making something different. Therefore, Samo tikki it was.

Some Ekadashi recipes you may want to try out:

Now before I go into the whole procedure of making Samo Tikki/ Barnyard Millet Pattis, there are so many different Fasting Day Recipes. Every state of India will have a particular dish for a particular fast. As I mentioned before for our family Ekadashi is very important so I have a variety of dishes that can be prepared for that fast.

6th Edition of Quarantine Magazine is out. Check i