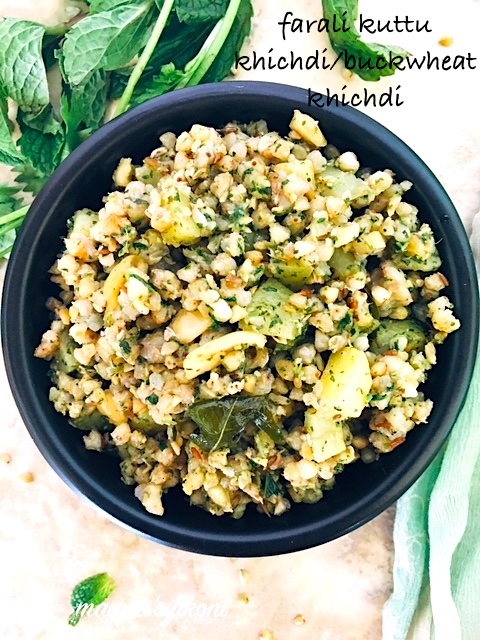 For Farali Kuttu Khichdi/ Buckwheat Khichdi, legumes are not used but buckwheat is cooked with potatoes, herbs, spices and nuts. According to the Hindu culture, the word farali refers to any food that is can be used during Fasting Days. Besides the Ekadashi fasting that comes twice a month, Navratri fasting is another one where many communities follow the rule of not consuming grains, pulses, legumes, cereals and certain vegetables.By the way, Kuttu is the Hindi word for Buckwheat. Since buckwheat is not a grain it is a farali ingredient. Usually, khichdi is a dish where any legume and rice are cooked together.

Nav means nine in the Hindi language and ratri means nights. So, Navratri is a Hindi festival that is celebrated over nine nights. Different parts of India celebrate this festival in different ways. But one thing is common and that these nine nights are celebrated in honor of Goddess Durga and her nine avatars.

In the northern east and East part of India Navratri is celebrated as Durga Pooja. During these nine days Durga Ma is worshipped with religious rituals, food offering, dance and merriment. Therefore, Its a time for fasting and religious rituals for many all over India.

In Gujarat or for Gujaratis

For Gujaratis it means garba and dandhia (dance). For most Gujaratis these 9 days of fasting means no grains or pulses are consumed along with many of the beans and other vegetables. The dishes one can prepare are exactly as the same as the ones we make for Ekadashi or Farali.  There are some who fast 9 days without taking any salt and  eat only fruits, nuts and milk.

Buckwheat is not related at all to wheat. In fact its known as a pseudo cereal. The name buckwheat comes from the tree beech as the buckwheat seeds resemble the beech nuts of the beech tree, triangular in shape. Why is it not a cereal or grain? Well, because buckwheat plant is related to sorrel, rhubarb and knotweed and its actually a fruit seed. Buckwheat is commonly used during fasting. The flour is more commonly used to make puris, pakodas, dosas or chilas, dhokra etc. The whole seeds or groat as its called can be used to make khichdi or porridge.

It is believed that the domesticated version of buckwheat was first planted 6000BCE in the inland of South East Asia and it spread from there to other parts of Asia and Europe. Its used to make soba noodles, the Russians make blini (pancakes) from it and is used to make crepes in France.

Advantages of Including Buckwheat in your diet:

The group unanimously decided Navratri Special as the 165th theme. As I mentioned, different regions of India celebrate Navratri in different ways. While Gujaratis and some North Indians consume only Farali Food, in South India Sundals is a must. Sundal is a traditional South Indian Dish that is specially prepared for Pooja or offering and usually is made from legumes. Other parts of the regions will refrain from meat, fish, eggs, while some will not even have onion and garlic for those nine days. As for me, since we follow the only Farali Food tradition, I decided to use buckwheat groat to make farali kuttu khichdi / Buckwheat khichdi.

Some Farali Dishes that you may want to check out:

Soaking buckwheat groat reduces cooking time.
Adjust the spices /condiments according to your taste. I prefer less sugar and more lemon juice.
Buckwheat groat doesn't take long to cook so keep an eye as you don't want it mushy.
Add cubed paneer instead of potatoes if you like.