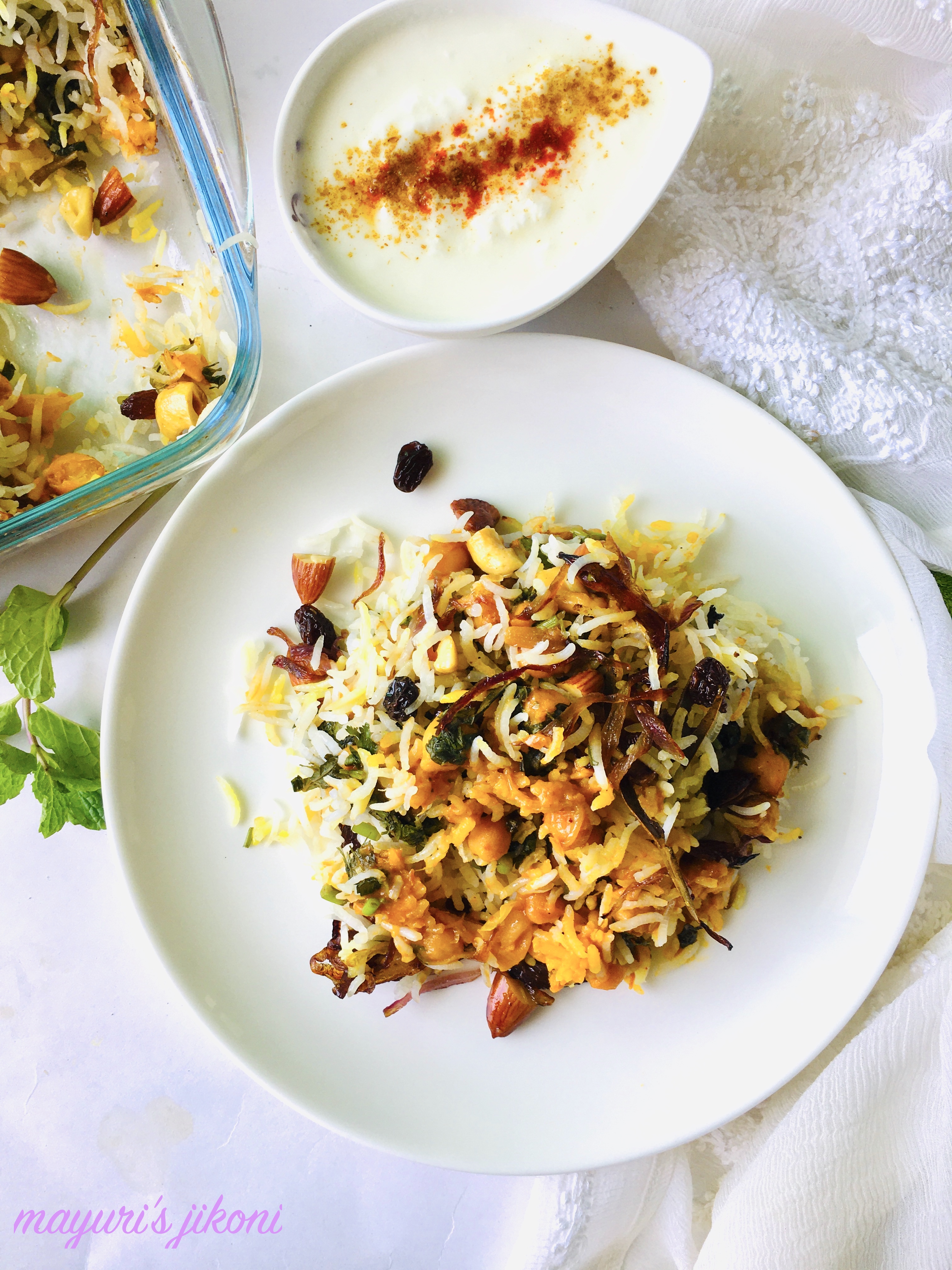 Kabuli Chana Biryani or Chickpea Biryani is a vegetarian biryani that is deliciously spicy, aromatic, flavourful and perfect as a meal on a lazy Sunday. Serve it with a side of raita and a salad.

How did I decide to use Kabuli Chana?

Finally, the local ISKCON temple (Mombasa) opens up its restaurant for takeaway only, after having been closed for 2 months because of the Covid 19 pandemic. Last Saturday, my neighbor placed an order with the temple restaurant for Sunday Lunch and I jumped for joy as I’m fed up with daily cooking. It was a much-required rest from the kitchen for a while at least.
For hubby and me he ordered one thali but it was enough for two. After we finished our lunch, a bit of the vegetable biryani and a bit of Chole (Chickpea Curry) were left over. I mixed both and put them away in the fridge. The next day heated it and enjoyed it for lunch. It was so flavorful and tasty. Thus the idea of Kabuli Chana Biryani came to mind.

It is my turn to suggest the theme for this week. My suggestion is Chana, use them whole and not the flour. The other suggestion is milk. Obviously, chana won. I was two-minded as I had a dish with milk too in my head. I chose chana to get the Kabuli Chana Biryani out of my head and the milk idea remains. So yes Theme #252 is Chana Time.

Chana or Chickpeas is a legume that is used in a wide variety of dishes all over the Indian Subcontinent. Right from the peas, to split peas to flour. It is one of the staples in any Indian pantry. It is believed that chana is one of the oldest legume or pulse known to mankind. Chickpeas are very popular in the North African, Mediterranean countries, Pakistan, Afghanistan and India. With veganism and vegetarianism gaining popularity worldwide chickpea consumption too has risen.

There are two main distinct varieties of Chana or Chickpeas:

One is what is called the Desi Chana or Bengal Gram. Usually smaller in size, they are either brown, reddish brown or black in colour. This variety is usually used to make gram flour, besan or chickpea flour. It has a much higher fibre content and low glycemic index making it a popular pulse for diabetics and for those on weight loss diets.

The other variety is the much bigger size and beige in colour Kabuli Chana, also known as garbanzo beans. This variety is not only popular in India but also in the North African countries, Mediterranean countries, Pakistan, Afghanistan. In India the name Kabuli Chana is pretty popular as long time ago it was believed that these bigger beige beans came from Afghanistan.

All varieties of Chickpeas or their flour form are used in almost all the daily cooking in India right from drinks to desserts. Chickpeas are rich, not online protein but also iron, folate, potassium, and manganese. No wonder it is one of the most widely used legumes. Here, I will only mention dishes where chickpea or chana have been used as a whole and not in the flour form:

What is a Biryani?

Biryani is a rich, aromatic, rice dish whereby half cooked flavored rice and a curry as put together and allowed to cook further sealed in a pan or pot over a low flame. Modern times biryani is further cooked in an oven. I’ve watched a cookery show sometime back where a hole was dug out in the soil, burning coal placed in the hole and on top the pan filled with biryani. The lid was sealed tight with some dough. The pan was packed on top with the soil and allowed to cook.

Well, my Kabuli Chana Biryani definitely has not been cooked in such an elaborate fashion.

For the Chickpea Curry:

For In Between Layer:

For the Top Layer:

Preparation of the Kabuli Chana/Chickpea Curry:

Preparation of the Topping: