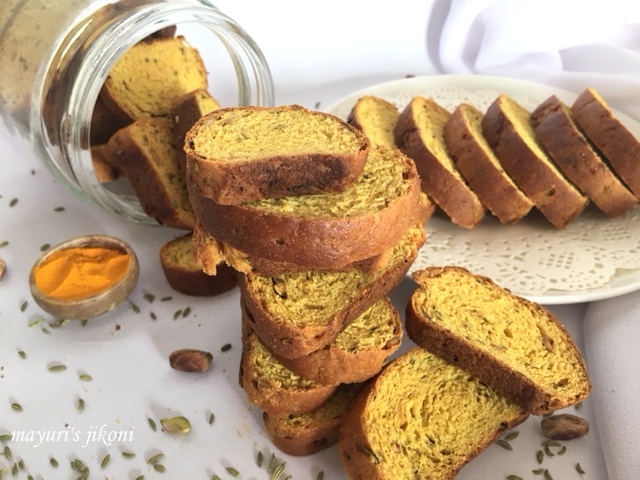 What is a snack? A snack is any sort of small amount of food eaten in between meals. It can be fruits, veggies sticks, to fried bhajias, baked goodies or even sandwiches. It all depends on individual tastes and requirements. When we were growing up, my mum would give us a glass of milk and leftover rotis with chevdo. We would put the chevdo in the middle of the roti, roll it up and it was the yummiest snack ever. In our house, bateta vada, bhajias, kachoris, samosas were mostly served at dinner time with parathas and vegetable curries.

Once a week we would walk with my mum to the Westlands shopping area.It was a day when we would go to the supermarket, go to the veggie market and a visit to the famous Oven Door Bakery was a must to buy some cookies, breads and some light yellow coloured rusks. I used to love those rusks. Back then we  were not allowed to drink tea or coffee but we would dunk the crispy crunchy rusks in milk and enjoy them. I am sure they added yellow colour to the dough and it had a few aniseeds in them.

The #FoodieMonday #Bloghop group decided on snacks as the 94th theme. I immediately knew that I wanted to make the rusks. I’d been wanting to make them for ages but just got so busy with other things and the recipe would be put aside every time I thought of making them. When I was baking them, the first round, hubby could smell the aniseed and asked me, “What are you still baking, in a few days we leave. Aren’t you suppose to slowly close down your kitchen?” I think he doesn’t realize that a food bloggers kitchen doesn’t close down until he or she is actually out of the house making their way to the airport, station or wherever one is going. Still keeping to the healthy cooking, I definitely didn’t have any fried snacks on my mind and rusk time it is!

In South Africa they are known as beskuit in Africaan. It is believed that making these rusks or beskuits was a way of preserving bread, that would be used during long treks as food. One could dip them in tea, water, soup or stew and have it in place of fresh bread. Rusks are known by different names in different countries; skorpor in Sweden, zweiback in Germany, sponge rusk in Cuba, tvebak in Denmark, biscotte in France, paximadi in Greece, peksemit in Turkey, sookhar in Russia, naan sukhari in Iran, fette biscottate in Italy, khasta in India. I am sure they all probably made them for farmers, merchants, etc who had to be away from home for long periods of time or even as a way of using up stale bread or cake. The flour and other ingredients may vary from place to place but they all are twice baked.

I didn’t want to use yellow colour so I used turmeric instead. Yes I am on a mission to include turmeric in everything possible. ( I’m suffering from early stages of rheumatoid arthritis and turmeric is suppose to be the wonder medicine).

Talking about turmeric one can include it in their diet in various ways, by adding to daily curries, dals, rice, breads etc. My mother in law would cut thin slices or strips and marinate fresh turmeric in lemon juice and a bit of salt. We’d have a bit everyday as part of our lunch. Check out how Mina makes Fresh Turmeric Pickle. Or add it into a smoothie just the way Swati has done in her Golden Smoothie for Winter. For colds and coughs or when you’re not feeling too energetic, the best hot comforting drink is Turmeric Milk as Nayna my friend has suggested.

I also added aniseed (valiyari, saunf) and cardamom powder for the flavours. Wondering why I didn’t try the recipe ages ago. Its such a wonderful filling and healthy snack.

Pssst … my hubby’s comment on the tea “I can see the bottom of the cup! You should have told me to make it if you wanted to photo it!” I must admit I love my tea with as little milk as possible and pretty dark. Hubby doesn’t like it that way and however much milk I add to his, its never perfect. So he makes his own cup of tea!

You may want to check out other snack recipes:

Sharing this recipe to the following event: