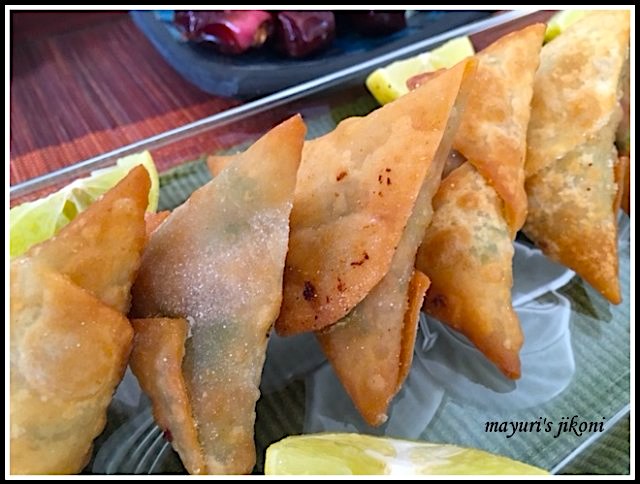 What is a Samosa?

Samosa is a fried snack. The pastry is crispy or flaky and its stuffed with a spicy filling of vegetables, meat or paneer. Spices, herbs, are added to the dry cooked. The filling is stuffed in a pastry which is usually made at home.

There are two main different types of samosas

The difference is in the way the pastry is made. The more famous samosas that are widely available in India have a flaky pastry and are folded into  more plump triangles.

The ones that I grew up enjoying have a thin precooked pastry that becomes crispy on frying. They are triangle in shape but not as plump as the Indian samosa.

Samosas in some parts of the world may not be triangle but are half moon shaped.

Samosa is an important part of the Swahili Cuisine which prevails along the coastlines of Kenya and Tanzania. Mostly, the filling is either minced mutton or beef or a mixture of vegetables which generally are peas, potatoes, carrots and onion along with spices and fresh coriander. So not surprising at all that samosa is not only a part of the daily or weekend snack but also an integral snack during the month of Ramadan.

We are a group of 12 members and each week we decide on a theme and accordingly post the recipes on a Monday. The whole idea of Monday is to overcome Money Blues and our dedicated followers have a recipe to look forward to. This week the theme is Ramadan Special. I come from an area that is famous for its Swahili Cuisine and samosa is a part of it. Since I don’t have meat, decided to make Paneer Samosa.

Ramadan is the ninth month of the Muslim calendar during which all devout Muslims fast from sunrise to sunset for the whole month. Observing fast during this month is considered one of the highest form of Islamic worship. Muslims believe that the holy text Quran was first revealed during the ninth month. Islam follow the lunar calendar, therefore fasting month each year varies. This time round its June -July. That means Muslims in some countries like Iceland, Germany, Norway, Sweden, etc will be practically fasting for over 20 hours. Fasting begins at sunrise and ends at sunset. That means Muslims abstain from any type of food and water during that period.

Suhoor (suhur) is the pre-dawn meal consumed by Muslims before sunrise. Usually this meal in most families tends to be simple. Its usually what we all would have for breakfast – oats, yogurt, toast, tea, eggs, smoothies, etc.

Iftar is the evening meal consumed to break the fast. Usually, during the month of Ramadan, families try and have iftar together. Some have it at the mosque, some at home. A variety of food is prepared for the evening meal. The fast is usually broken by having some dates. It is believed that Prophet Muhammad quoted that ” When one of you is fasting, he should break his fast with dates; but if he cannot get any, then he should break his fast with water, for water is purifying.”While families and friends get together for Iftar, a variety of snacks are prepared. Samosas is a must for most families.

Other famous Snacks that are prepared during Ramadan

Makate Sinya – usually enjoyed as a tea snack or for breakfast with tea.

Kaimati– the Swahili version of doughnuts, usually served as desert

Dal bhajia – served as a snack

During the month of Ramadan Mombasa is different. Shops remain open till late as families come out after Iftar and dinner for shopping or to enjoy desserts. Streets and shops are lit up with fairy lights. Vendors sitting in and outside the main Mackinnon Market sell fresh succulent radishes which many Muslims break their fast with. Its believed that having a radish is cooling for the digestive system. A huge variety of dates, big, small, sweet, soft, are sold everywhere. Best time to stock up on dates and to prepare date tamarind chutney. Raw pawpaw ‘noodles’ are are common sight during Ramadan. The raw paw paw noodles are used either to tenderize meat or is cooked in milk or coconut milk to make a kheer or pudding like dessert. Ready made snacks  are sold for those who don’t get time to cook after a hard day’s work.

For this theme, I decided to make paneer samosa is just right. While most Muslims prefer meat samosas, some enjoy vegetable or paneer ones. When I was growing up there were no paneer stuffed samosas. As popularity of paneer (fresh Indian cottage cheese), grew in Kenya, it became a fad to use it as a filling for samosas. I so prefer the paneer ones as opposed to the vegetables ones. Grated or crumbled paneer with finely chopped onion, fresh ginger and chilli paste with spices and lots of chopped fresh coriander are mixed and filling in the Patti or manda as its called in Kiswahili.

Bohri Samosa – Shobha’s Bohri Samosa is what is commonly made here in Kenya by most of the Muslim Communities.

Plain Flour – all purpose flour. For the pastry (patti, manda) and extra for dusting

Salt – for the pastry and the filling

Lemon Juice – for the pastry and the filling

Water – for the pastry dough

Peas – either steamed or boiled for the filling

Oil – for the filling, for making the pattis and also for deep frying

Cumin seeds – also known as jeera, for the stuffing

Asafetida – or hing for the stuffing. Omit if you don’t have any

Cinnamon Powder – for the filling

Clove Powder – for the filling

Sugar – to balance the flavors of the filling

Onion– finely chopped for the filling

Green Chutney –  to serve the samosas with

FOR THE PANEER FILLING

PREPARATION OF THE PANEER FILLING