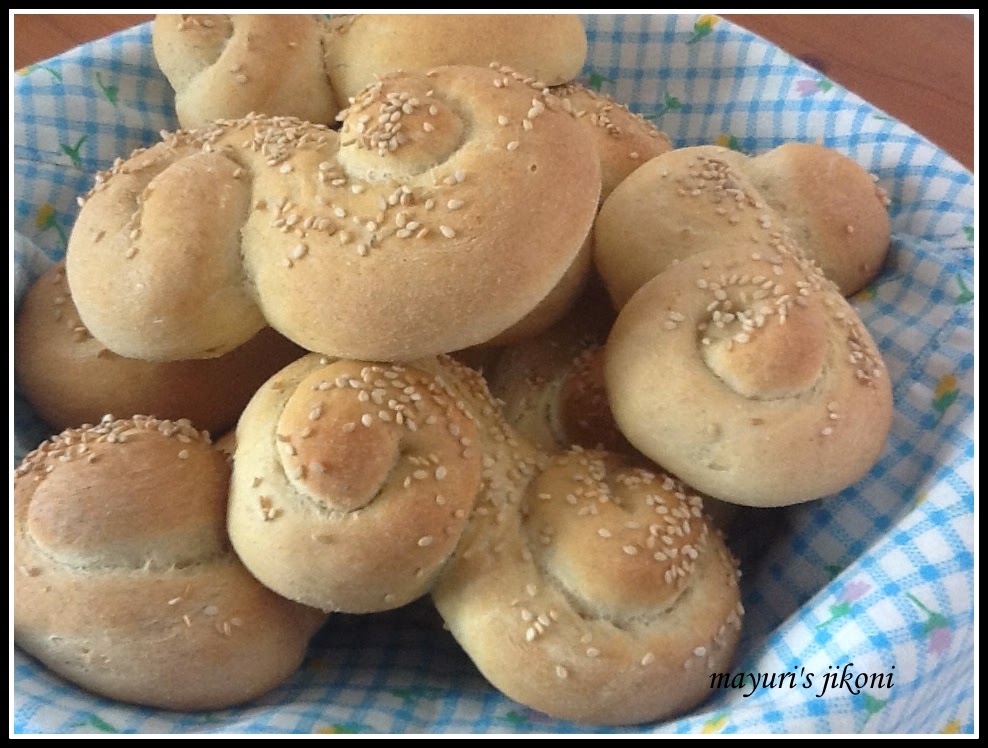 Aparna of My Diverse Kitchen’s challenge for the We Knead to Bake group was a semolina bread. I was surprised as how would it really hold together. Then as I read the recipe further down realized that I needed to add wheat gluten. Thank God I had brought that back from India with me. Most breads baked in India require you to add the gluten as the plain flour available there is not as glutenous as the flours available in the western countries or here in Kenya. My daughter was not using it so brought it back here with me.
When I was getting the ingredients ready, I still had that little doubt in my mind about using only semolina. I decided to add wheat flour and was really glad with the outcome. Pane Siciliano is usually baked on 13th December to celebrate the bravery of Santa Lucia. It is said that Santa Lucia or Lucy came from a wealthy family and she carried food for the persecuted Christians hiding in the dark underground tunnels. She would wear a wreath of candles on her head to light her way. Another tale claims that she was blinded for following her faith.She is known for feeding people during famine.Santa Lucia is the patron Saint of Syracuse. It is believed that she arrives with a donkey and her helper Castaldo bearing gifts for children. Children are asked to leave some hot milk for Santa Lucia, hay for the donkey and wine for Castaldo. Bread traditionally made on this day is either an S shaped loaf (occhi di Santa Lucia) or the snake shaped (mafalda) loaf. I made the occhi di Santa Lucia (eyes of Santa Lucia), representing the eyes of Santa Lucia.
The bread is made from rimacinato or ground again semolina or durum wheat. I was lucky that a few months back when I bought semolina, by mistake I got the really fine one. I put it away in the fridge thinking that I will use it up to make pani puris. Was I glad when I could use it for this delicious bread. The semolina made the baked bread appear very light yellow in colour with a lovely crusty golden top.

For the topping :
water for brushing
2-3 tbsp sesame seeds