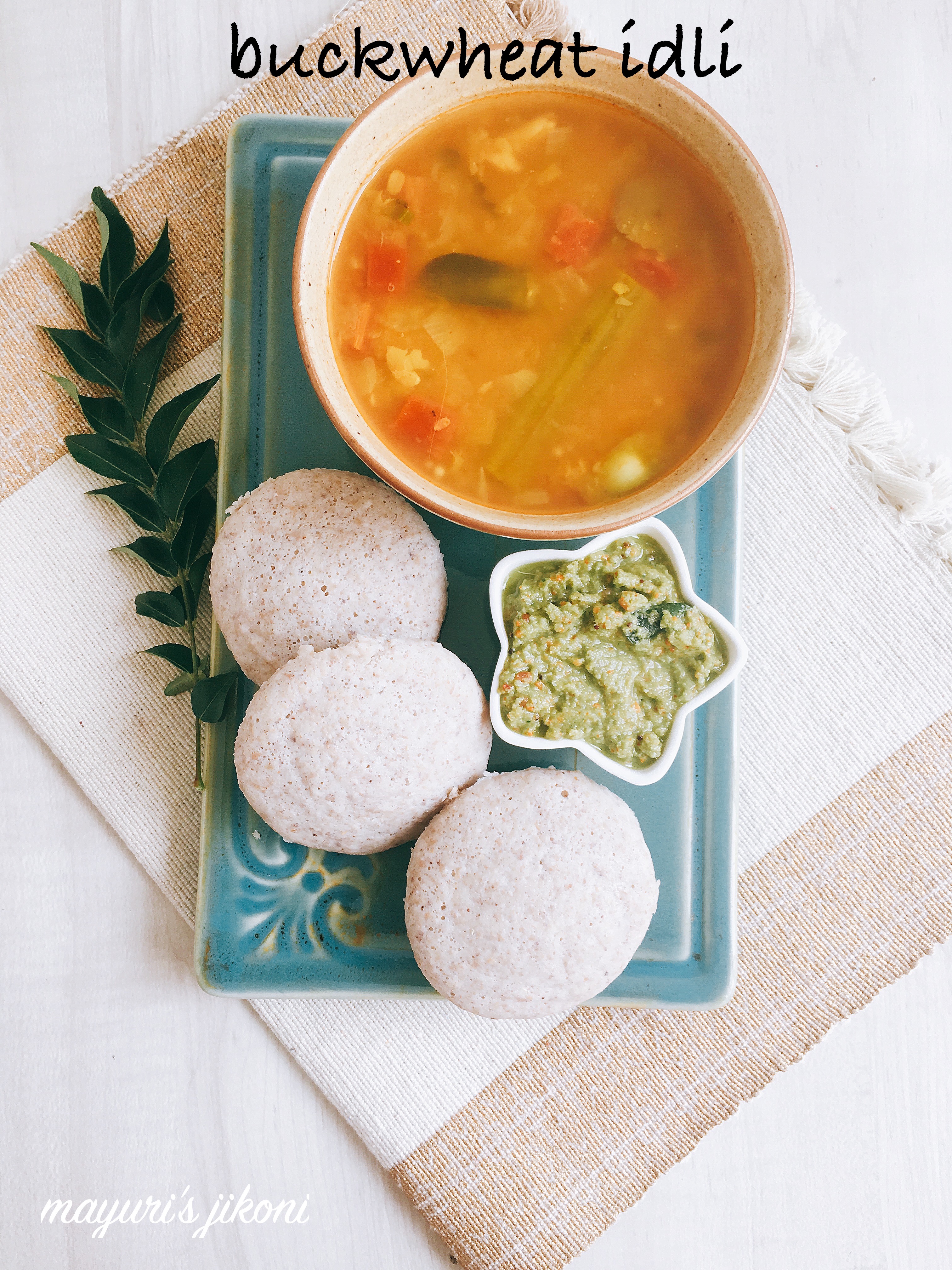 Buckwheat Idli is a soft, fluffy, nutritious ,steamed and  healthy breakfast or snack to enjoy. Enjoy it with some sambar and chutney, or on its own with some chutney and ghee drizzled over it. Or, you can stir fry them with some podi masala or spice powder. I simply love podi idli.

Idli or Idly is a popular South Indian savory steamed cake which is usually made from rice and black lentils(urad dal). The batter is allowed to ferment overnight without yeast or other raising agents. Next day its steamed in a idli stand or in small bowls. Its a popular breakfast dish and is served with usually with a coconut chutney and sambhar. Sambhar is a lentil stew or dal, with some vegetables and spices added to it. The idli is soaked in the sambhar, topped with chutney and enjoyed. There are a variety of  instant  Idlis which requires no fermenting and can be made within 30-40 minutes. The most common one is made using semolina but these days other grains are also used.

Why is Idli healthy?

Its a low calorie, filling and healthy breakfast option. It fills the tummy and does not make one feel lethargic. It provides energy and is easy to digest. Lactic acid bacteria present in the fermented idli batter, helps to alter the PH balance of the intestines making it a healthy food. The fermented process increases the bioavailability of nutrients like folic acid, riboflavin, niacin, thiamine, biotin and Vitamin-K as well as some antibiotic & anti carcinogenic substances. This is because micro-organisms break down complex protein, carbohydrates and fats more efficiently, enabling easy assimilation of nutrients.

This also aids a healthy gut flora, since absorption of minerals and vitamins is so much easier. Each idli is only 39 calories. However, the calorie input goes up when paired with chutney and sambhar. But still the overall calorie intake is less than any other popular breakfast dishes like pancakes or puri bhaji as the sambhar will have only a small amount of oil or ghee that is used for tempering spices and herbs. Fat found in coconut is of the healthy kind.

It definitely is. A poor man too can afford a hearty meal. There are so many variations of idlis today. Healthy grains like semolina, millets, quinoa, buckwheat, amaranth, oats, other lentils, etc are used to make healthier idlis.  Idlis have taken on a new birth or avatar as Manchurian idlis, idli chaat, cocktail idlis, sweet and sour idli, idli 65, cheese baked idlis etc. With so many varieties to suit every palate, idlis have become an anytime snack right from breakfast to dinner and in between.

Why am I going into details about Idli for this post? Well, it was my turn to suggest ideas for #188th theme.Some argue that the rice is not good for health but these days rice is easily substituted to include more healthier grains to make this healthy breakfast. As a result I  suggested making idlis without rice. All the members of the group loved the idea. Also, fellow member Archana informed us that 30th March is World Idli Day. I didn’t even know that existed. So planning began to make this a memorable event for the group.

30th March has been celebrated as the World Idli Day since 2015. How did this day come about? Its not set by the Government of India or UN or any important body. It is belie,ved that a popular idli only caterer from Chennai, Eniyavan, made a staggering 1,328 varieties of idlis in 2015 to instate this day. A staggering 44 kg idli was also cut by a top bureaucrat to seal the deal as they say and henceforth March 30 became World Idli Day.

I have made idlis using semolina, millet and this time I chose to use buckwheat which is known as kuttu in hindi. Initially I thought I’d use buckwheat flour and then realized that the flour may not ferment well. I used buckwheat groat and some urad dal. It is believed that the raw materials like rice and other grains and lentils have small quantity of a specific lactic acid bacteria present. When they are soaked the lactic acid bacteria increase and further more increase when the batter is resting. The lactic acid and carbon dioxide produced by bacteria help to ferment and raise the batter. My batter fermented so well, that I didn’t need to use any leavening agent like baking soda.

Buckwheat is not a cereal or a grain though the word wheat is included in its name. Considered a super seed, its a fruit seed and related to sorrel and rhubarb. Classified as a pseudocereal, the seeds of buckwheat are usually consumed like grains or cereal. This super seed helps to maintain healthy blood sugar levels in the body. Also it is a rich source of dietary fibre and has good quality protein. Gluten free, its ideal for those who have gluten intolerance. Richer in minerals like manganese, copper, magnesium, iron and phosphorus compared to wheat, rice and corn.

Coconut Chutney – click on the link for the recipe

mayurisjikoni
Buckwheat Idli is a soft, fluffy, nutritious ,steamed and  healthy breakfast or snack to enjoy. Enjoy it with some sambar and chutney, or on its own with some chutney and ghee drizzled over it. Or, you can stir fry them with some podi masala or spice powder.
Print Recipe Pin Recipe
Prep Time 15 mins
Cook Time 10 mins
SOAKING AND FERMENTATION TIME: 18 hrs
Total Time 18 hrs 25 mins
Course Breakfast, Snack
Cuisine Indian, South Indian
Servings 20 idlis

PREPARATION AND FERMENTATION OF THE BATTER: