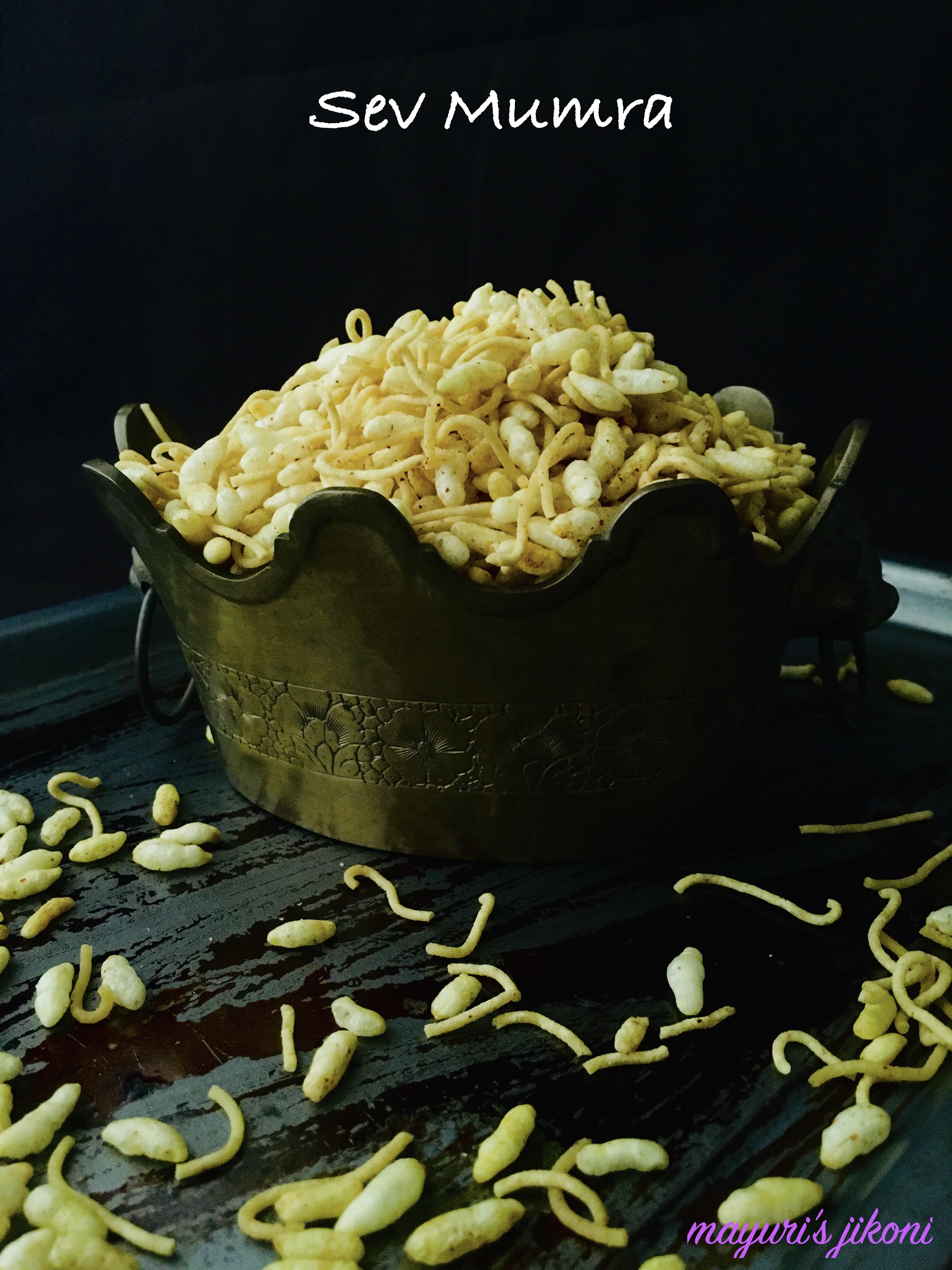 Sev Mumra is basically an Indian Savory Snack that can be stored for at least a month. Generally, this snack is prepared in a large batch. Basically, there are two main parts to Sev Mumra – the Sev and Mumra. Both Sev and Mumra are mixed along with spices and add ons if one prefers to prepare a snack. Its usually enjoyed during tea time. I prefer making sev mumra compared to other fried snacks as only the sev is deep fried. The proportion of sev to mumra totally depends on your preference. We prefer more mumra to sev.

Sev is fried noodle like savory prepared from chickpea flour(besan) and spices. To prepare sev you need a special sev press or a jaro to create the besan paste into noodles. These noodles are deep fried in oil.

Mumra, also known as mamra, kurmura or murmura is puffed rice. Rice kernels are heated under high pressure and steam to form puffed grain. The mumra is either deep fried or roasted with spices and salt. I prefer to roast them in the oven. If you don’t have an oven you can roast them in batches in a wide wok or kadai.

Some Snacks that are Prepared Ahead of Diwali:

Every region in India has its own special dishes that are prepared ahead of the festivals. These are usually not only enjoyed by the family but also served to friends and family when they come to visit at home. I remember years ago we would prepare thalis or platters of assorted snacks to give to our friends, family and take for the staff at our workplace. That meant we made huge quantities of both sweet and savoury snacks.

Mathiya – crispy thin fried savory snack made from urad dal and moth beans. I now don’t make these at home as I rather buy readymade ones from women running small businesses.

Chevdo – a savory mixture of fried lentils, flattened rices spices, potato crisps and nuts. Check out how Mina makes it at home.

Chakli – a spiral fried savory snack made using rice flour and spices. Some use wheat flour or all purpose flour.

Googra – a sweet snack where semolina is filled in a pastry dough and fried.

Farsi Puri – flaky crispy savory made from all purpose flour

It has been over 8 months and the World is still fighting the Covid 19 Pandemic. Countries are going through varying ups and downs creating havoc to the economy in general. So with Diwali just round the corner, do we feel like celebrating? In reality, for my hubby and me in general we don’t as recently there have been deaths of people we know due to Covid. A friend is till date still in hospital. During this festive time, Kenya at the peak of the curve. Though worship places are open, this will be the first ever Diwali when we will not be going to the temple. Sitting at home and praying, lighting diyas, sharing food with neighbors is all we will be doing. No Diwali parties, no visiting friends and relatives. Look at the bright side, I’ll be celebrating Diwali on Zoom with my family in UK. During this pandemic we’ve been reaching out to friends and families through Zoom, Whatsapp, Botim, etc.

So far what have I prepared?

In this case, nothing much except for this Sev Mumra and Baked Farsi Puri. Eventually, I may prepare googra but sweet dishes will be prepared in small quantities as the festivities begin just enough to offer to God. The Diwali Festival will begin from Wednesday 11th Nov and end on Monday 16th Nov.

These are the Sweet Dishes that I usually prepare as the festival begins:

In fact, with the upcoming festival, the theme for this week was unanimously agreed on as the Diwali sweets or savories.