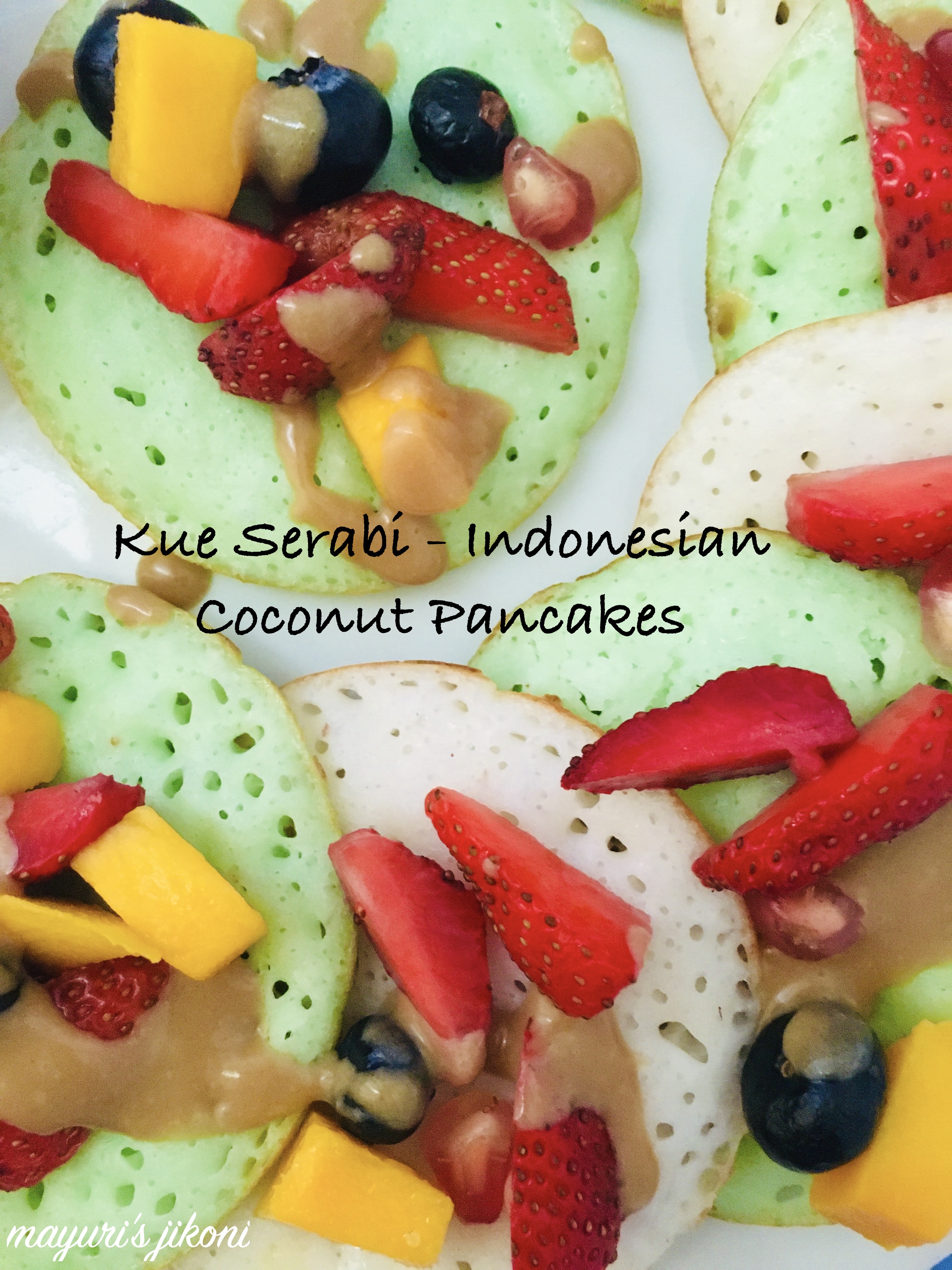 Kue Serabi is Indonesian Pancakes that are made with coconut milk, sometimes grated coconut is added and rice flour. Usually served with a coconut milk and palm sugar sauce. Traditionally, Kue Serabi are served without any fruit or topping as its sold as street food. However, these days you’ll find kue serabi sold in Warungs (roadside eateries), boutique hotels and at home stay places as a breakfast option with toppings.

As I mentioned above generally these Indonesian pancakes are made from rice flour, coconut milk and an optional addition of grated coconut. Also, with that you need yeast, pandan leaves or extract and an egg. Sometimes all purpose flour too is used. But at a small cafeteria in Ubud we found a vegan version with no eggs in it. Most recipes you’ll find that the pancake batter has no sugar (gula). Moreover, the only sweetness comes from the coconut milk and the sauce where palm sugar is used.  Pandan paste is added to the batter. However, if you don’t have access to pandan then the extract or essence can be used, just as I did.

Where did I taste the pandan flavored green pancake first? In Ubud. During our first visit to Bali, my son’s friend who owns a taxi took us on a day trip to Ubud. Before we went back to Depansar, he asked if we could stop at his home for a moment. We agreed and got an insight to a typical Hindu Balinese home. As a matter of fact, many still live as joint families, with a common kitchen, a common temple and a common meeting area within the compound or enclosed area. His wife invited us to have some Balinese Coffee and Pancakes. Indeed, the light green pancakes looked attractive. In addition, I got a rough recipe of the pancakes.

In Addition, I was shown what pandan leaves look like and how they make the paste. First, the chopped leaves are crushed with a bit of water using mortar and pestle. Then it is strained. As pandan extract does not stay good for too long, the family makes it every day. They use pandan extract for the offerings they make to the Gods. Modern homes, chop the leaves, add them into a blender with water and allow the liquid to rest in a jug or jar.  The darker green deposit at the bottom is used. The water at the top is discarded or used to cook rice.

Pandan is a tropical plant with fragrant leaves. It commonly grows in the South East Asian region. Pandan has a unique taste and fragrance. Therefore, its commonly used in the South East Asian desserts and drinks. The leaves are used to wrap meat and sticky rice and cooked. While South East Asian countries use the leaves extensively, the Indian Sub Continent uses the extract from the flower. Generally, Pandan is considered the cheaper ‘vanilla’ of SE Asia. Incidentally, the plant is looks like a palm with spiky, long, slender green leaves.

In this case, Kue Serabi Pans are round like a kadai or wok with 4 or more wide deep roundish cavities with a lid.  Since I don’t have the pan, I’ve used a mini uttapam pan. If you don’t have that then you need to use small muffin or fried egg rings. Place it in the frying pan, pour batter and allow it to cook, covered.

This week the FoodieMonday/ Bloghop Group is preparing any dish from the South Asian Cuisine. That part of the world cuisine has so much to offer. However, it all depends on the procuring the right ingredients required for the cuisine. These ingredients add a distinct flavour and aroma. There are so many dishes that I’d love to try but don’t get some of the basic ingredients, like kaffir lime leaves, galangal. Then I remembered the green pancakes I had in Ubud.

Priya who blogs at The World Through My Eyes is a huge fan of Veg Thai Food. So, not surprisingly, she suggested this theme. For this theme she has prepared the famous veggie version of Kaeng Phanaeng (panang /phanag), the milder and creamier version of Red Thai curry.  In fact, I still have her Som Tam Mamuang (Thai Raw mango Salad) on my list to try.

Some Asian Dishes to check out:

Rice Flour – for the pancake batter and very little for the sauce.

Coconut Milk – for the pancake batter and the sauce.

Pandan Extract – I’ve used ready made extract or essence as I don’t have access to fresh pandan leaves. If you do, make the pandan paste for the pancake batter. Add chopped leaves to you prepare the sauce and remove it before serving.

Salt – for both the pancake batter and the sauce.

Water – for the sauce and the pancake batter.

Palm Sugar or Coconut Sugar – for the sauce.

Topping: of your choice, can be fresh fruit, jam, nuts, coconut, chocolate, etc

FOR THE PANCAKE BATTER:

FOR THE COCONUT SAUCE:

TO PREPARE THE PANCAKES:

PREPARATION OF THE PANCAKE BATTER:

PREPARATION OF THE COCONUT SAUCE: