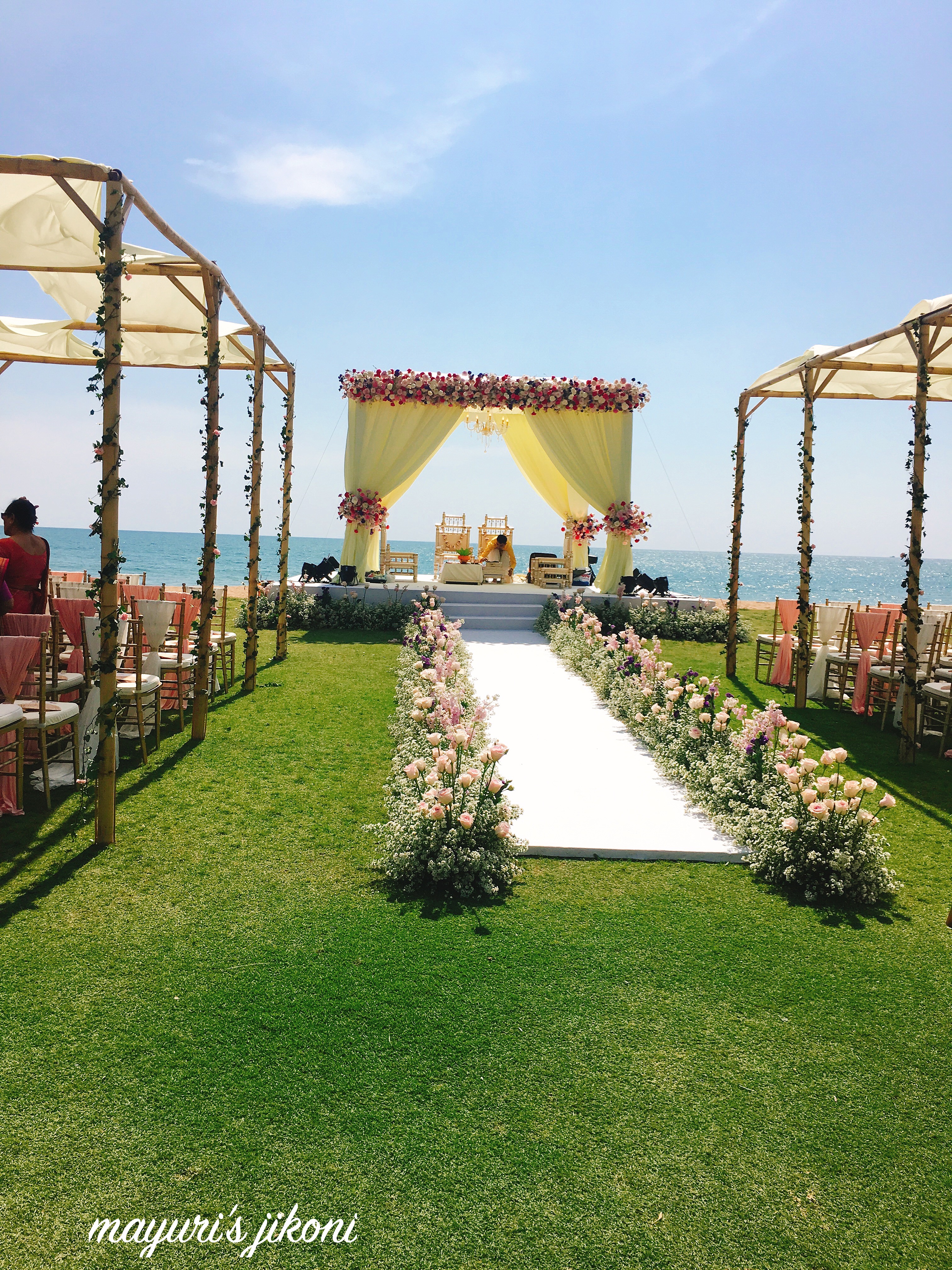 To all my readers, thank you so much for the encouraging and positive comments for my first travel post. I must admit that Thailand was not on our bucket list as such. Last year we transited Bangkok while going to Bali. The orchids at the airport did impress me but after that didn’t give it much thought.

My niece, my sister’s daughter announces her engagement and subsequently her wedding. Jumped for joy as she wanted to get married in Thailand. Why she chose Thailand and they are both from UK is another story which I wouldn’t go into details.

8th April is when packed our bags and moved out of Manathai Khao Lak to go to JW Marriot Khao Lak which was a drive of about 15 minutes. This hotel is so much bigger than Manathai but lacked the lush greenery we had got accustomed to at Manathai. We arrived just before 11a.m. and being such a busy hotel, our room was not ready.

A special reception desk for the K&S wedding guests was set up in the large lobby. We were welcomed with a garland of orchids and white tiny flowers. In Thai they are called malai chum rui, which is a small garland given to people as a souvenir or to welcome them. We were given a welcome somewhat extra sweetish drink and a cold towel. Those ice cold towels are such a boon in the hot humid weather.

view of the resort from the lobby

Phuang Malai is the Thai word for a flower garland. Malai meaning flower and phuang meaning binding together. Malai chai deaw is usually garlands that are used as an offering to show respect like in temples. Malai song chai garlands are put around the neck of an important person like a dignitary and used by the bride and groom during a wedding.

patriarch of the family honored with a malai chum rui

We were told to wait for our room so we headed to meet our family. My brother had a pool access room so naturally most of my family was there.

Hugs and excitement, meeting and greeting and soon it was time for lunch at the Ta-Krai Restaurant.

Was I glad to see some Indian food. Had a bit of vegetable curry and roti, salads, some veggie tempura and then we headed for the wide variety of desserts.

a huge selection of fresh fruits and desserts

Chatting and meeting extended families, we were around the lunch area for over an hour.

what an wonderful way to enjoy coconut ice cream and mango

Finally we got our room at 4.30 p.m. It took a while for our luggage to get to the room. Such a luxurious room and a lovely cute basket of snacks and drinks awaited us from the bride and groom. We were glad to be in an air conditioned room after spending over 4 hours in the hot and humid air.

After that it was kind of a rush for hubby and me to unpack, shower, iron clothes for the first event, dry my hair, get ready for the Party in Paradise.

We got a bit late and I was not happy as we missed the meet and greet event. What I couldn’t understand is that if we had booked our room months ago and knowing that we were wedding guests why weren’t our rooms ready in time? Headed to the Waterfront Main which was a long walk for us and hubby lost the map, so it was a finding game.

All the frustration immediately evaporated when I saw how radiant my niece looked, seeing family all under one roof and lets not forget about the   huge variety of food. I’ve never seen so much food at a wedding event. Pani puris, dosa, pita bread with dips, Indian curries and naan and so much more. I didn’t even bother to see what variety was available for the non vegetarians.

Dessert was served on the table, and seriously I didn’t want to spoil the chic arrangement. It was like should I have all of them? Which one should I choose? 6 of each so there was one each for everyone.

The night culminated in a dance performance by my niece’s cousins and friends. Then began the long night of dancing and merriment.

Next day we all got ready, had breakfast. You could choose from cereals, to eggs, breads, salads and hot Indian parathas or bateta poha (beaten rice with potatoes). Some of the pre wedding ceremonies were carried out back home so the morning event was the most fun and short ceremony of haldi or peethi. Traditionally, it is said that the sister in laws of the bride would go to the pond or well to fetch water for the bride to be to have a bath. A mixture of turmeric, rose essence, honey, sandalwood, would be mixed and applied on the bride to be’s whole body. The same ceremony is also carried out for the groom to be. This is done so that for the wedding day the couple would be appear radiant with a healthy glowing skin.

After the haldi ceremony everyone rushed back to their rooms to get ready for the afternoon wedding. The wedding mandap was erected facing the sea. It looked so beautiful but it was just too hot for us to pretend that in our silk saris the humidity did not bother us.

What is a mandap? Well, its a temporary  four poster structure with a canopy and open on all four sides. Traditionally, they were made of wood but these days other kinds of materials are used. Read more about the importance of a mandap here.

Just as the wedding ceremony got over, dark clouds loomed above and it began to drizzle a bit. In a way it was a relief to get into the air conditioned restaurant where we had cold drinks, tea, snacks. As soon as the clouds disappeared, we were called out to get ready to congratulate K&S and also to take a photo. As soon as our turn was over, hubby and I rushed to the room to take a quick shower and put on some more comfortable clothes.

I’m glad we did that as the Sunset Dinner was out on the Olive Lawn and again it had become very humid.

A huge variety of food to choose from. I loved the way the papaya salad and the raw mango salads were prepared, without any fish sauce. By this mealtime, I didn’t want to have any desserts but my sister’s brother in law insisted that we try the kulfi. Glad I did as it was sprinkled with a tiny amount of salt which gave it an interesting taste. After dinner there was entertainment by the fire performers.

Everyone decided to retire early as next day was an early start. We had to be in the lobby by 6.30a.m all ready to go to the Gurdwara Sahib for the Sikh Wedding(Anand Karaj). A bus ride from Marriot to the Gurdwara Sahib in Phuket Town took us about 1.30 hours. We had packed breakfast. A choice of banana, apple, croissant, juice, yogurt, paratha. I love attending a Sikh wedding, short and so meaningful.

As soon as we reach the Gurdwara we are greeted by the priest and the Milni ceremony took place. This ceremony is where men from the baraat (groom’s side) are welcomed by the men on the bride’s side with a garland and hug.

The Anand Karaj was performed in the prayer hall upstairs.

K&S sat side by side in front of the Guru Granth Sahib(Holy Book). The ceremony started with the couple and their parents standing up to offer Ardaas to ‘Waheguru’, after which singing of Shabads or hymns was done. The priest explained to the couple the significance of the marriage, the duties that each need to perform within the sacred relationship, and the general idea of leading a pious life according to Sikh tenets. The couple then bowed down before the Guru Granth Sahib. The father of the bride placed a saffron colored scarf on the groom’s shoulder and the other end of the same on his daughter’s hand. This signified that they are joined and ready to take the lavaas or vows.

The priest recited the four Lavaa or stanzas from the Guru Granth Sahib. After he completed reading the first stanza, the couple got up and slowly walked around the Guru Granth Sahib in clockwise direction, with the groom leading the bride.The brothers of the bride stood on the side to guide the sister.  After completion of the round they came back to their positions but remain standing for the remaining three hymns. The process of circumambulation was repeated three more times after each Lavaa. The raagis sang the Lavaas in the background while the couple performed the Pheras.

After the pheras, the raagis or singers sang melodious hymns of Anand Sahib.An Ardaas was offered as an indication that the wedding ceremony is now complete. A random Hymn from the Guru Granth Sahib was chosen to be recited while Khatah Prasad is distributed among all the attendees. The prasad is usually a sweet halwa made from wheat flour and its ever so tasty.

After the ceremony we all had lunch of dal, roti, sabji, rice and gulab jamun.

The afternoon was for relaxation. It gave us the opportunity to use the pool, laze around and chit chat. Marriot Khao Lak has two main types of rooms, pool facing or garden facing. Then they have family room and villas. Its a huge hotel with 5 restaurants and several bars around the pools.

The evening culminated into a Wedding Reception held at the Grand Ballroom. Food was served at the table and we all loved the crispy bhindi which was served as a starter. Will have to get Chef Mohan to share the recipe with me. He was in charge of making sure that the wedding guests were well fed. I must say he did an excellent job.

time to relax after all the leg shaking 🙂

Overall, an exotic, romantic venue for a wedding. Good service and friendly staff. What else does one need for a prefect wedding.