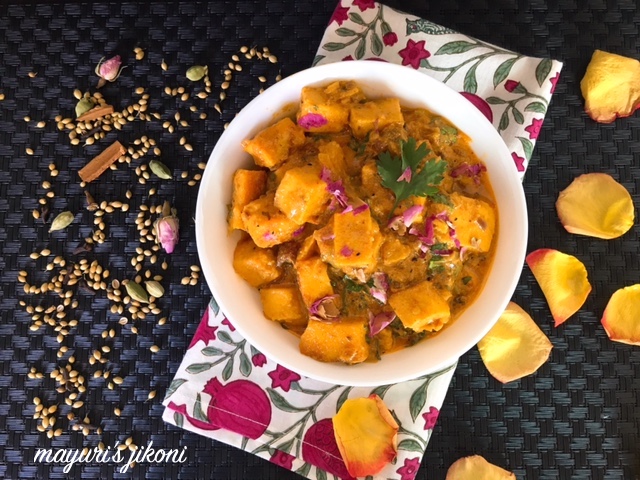 Diwali week is ever so busy in general, but more so for me this year as my maid decided not to come to work and to top it up came down with a bad flu and fever. So I nearly sat out this theme. What am I talking about? Its the FoodieMonday/Bloghop day. The #115th theme – Awadhi Cuisine was decided by Kriti who blogs at Krispy Kadhai.

I was really in no mood or didn’t have the energy to really do any research on that cuisine. However, eat we all must whether sick or not and I had a huge slab of paneer staring at me whenever I opened the fridge. So, do you get those days when with much vigor and power you want to tackle all the jobs from top to bottom and from side to side? Well, I had one of those days…with a runny nose and a heavy head, tackled the house work, cooked lunch and baked a batch of cookies to give away as presents. I finally managed to turn the slab of paneer into an exotic sabji. Paneer Kundan Kaliya…just the name had me saying wah wah wah! However take it from me, its one of the easiest to prepare.

Just the name Awadhi and I think of long cooking procedures (dum) and a mile long list of ingredients. Then add the dos and don’ts and Awadhi cuisine sounds like a humungous task. I’m really not going to go into details about this cuisine as one can easily google it. All I read was that certain strong spices were never never mixed with subtle fragrant spices…like say rose is not mixed with garlic.

Just briefly, Awadh is an area representing Lucknow and near by places. Awadh has been greatly influenced by Mughal cooking techniques. The bawarchis of Awadh gave birth to the dum style of cooking. Awadh cuisine is all about using the best quality ingredients, a variety of spices and and a balance of  taste. Awadhi spread includes kebabs, kormas, biryanis, kaliyas, zardas, kulchas, sheermal, roomali rotis, halwas to name a few.

The original kundan kaliya is mutton prepared in a gravy which must have turmeric or saffron and the mutton pieces were wrapped in gold leaf and served to the Nawabs. Being a vegetarian I decided to replace the mutton with paneer and I don’t use silver or gold leaves or foils  for cooking. I hope you enjoy my version of kundan kaliya.

Tips:
You may want to check out other awadhi recipes:
Sending this recipe to the following event:

My mini temple at home is a place of solace, calm

Theme: Home. A teeny weeny memento corner in my h