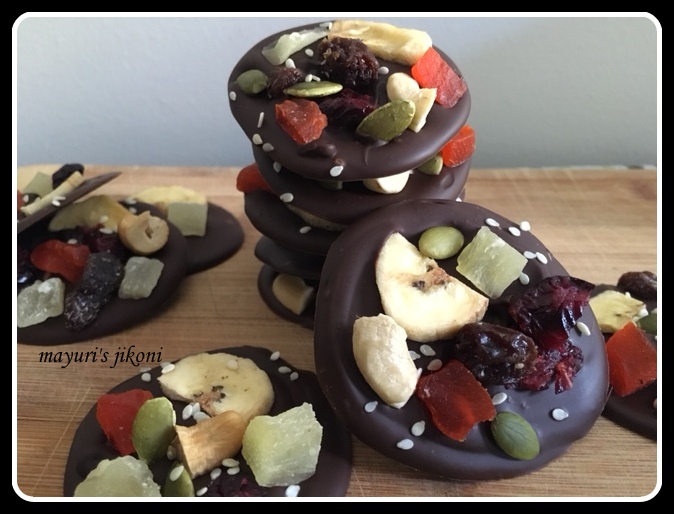 It’s a week since we arrived in Montreal. The weather is really hot. Good for the people of Montreal, after the long winter. People sun tanning in their balconies, in the parks, children playing under the water fountains, pet owners out with their pets, cold beers, barbecues even in the smallest balconies, alfresco dining, beautiful flowers, greenery, street festivals, people riding on their bikes, walking, hiking, an endless list of ice cream flavours. The whole city is bustling with activities. For me its just too hot (I get too much sun anyway in Mombasa). So I really don’t want to get out of the house till after 4pm when the heat is a bit bearable. However, sometimes we have to get out when the sun is beating on our heads. I then walk around with ice cold water. Talking about heat, couldn’t believe that the chocolate was melting so fast in my hands when I was preparing the chocolate medallions.
Our 46th theme#FoodieMonday#Bloghop is Dry Fruits. Dry fruits or dried fruits are fruits that are dried either in the sun, dryers, dehydrators or ovens whereby the original content of water is removed. Fruits are dried and consumed when not in season by adding them to breads, salads, rice, cakes, stews, curries, desserts etc. Dried fruits add natural sweetness to a dish. During the early civilization fruits were picked and dried to consume during the winter or cold seasons.They also used them as natural sweeteners. Nowadays usage of dried fruits is wide spread, where most people use it everyday. Most nutritionists recommend a handful of dried fruits to ward off hunger pangs. Its better to reach out for some dried fruits than a packet of fried snacks. However, like everything else, too much is not good as they are sweet. I prefer to nibble on a few raisins, a couple of figs, dates or apricots to satisfy my sweet tooth.
When the group decided on dry fruits, I was thinking of cakes, muffins, bread. Both father and son didn’t want to have any sweet bakes. But then hubby is always looking for chocolate after dinner. So I decided to make chocolate medallions with dried fruits, nuts and seeds. One medallion is enough to beat the craving and is healthy.

CHOCOLATE MEDALLIONS
Makes 12-16 (depending on the diameter)