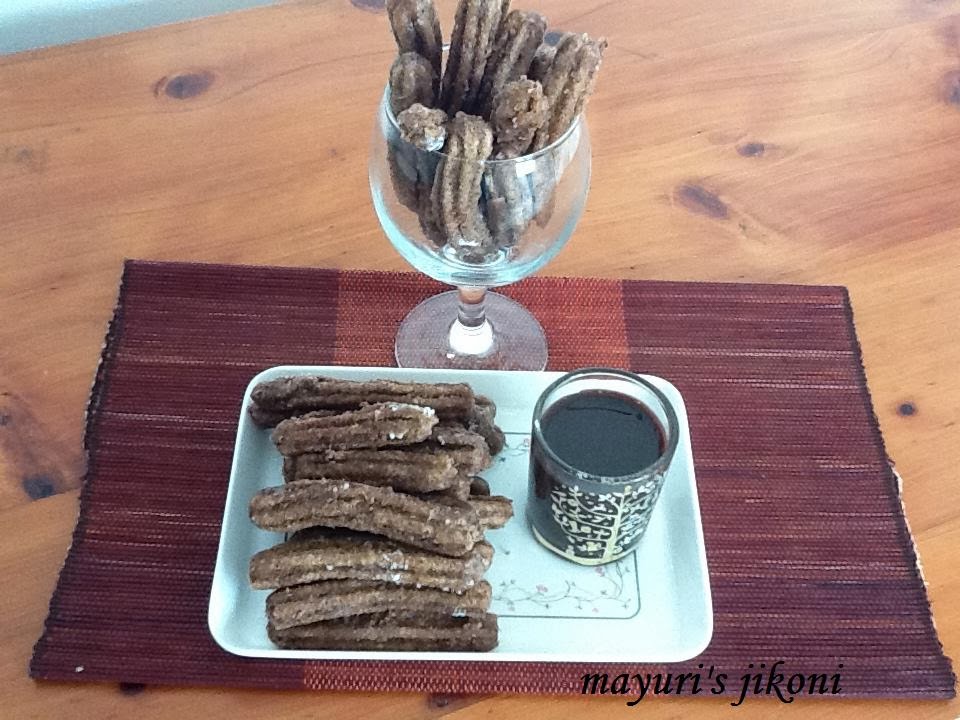 Finally had to use an icing bag!

Our Sweet Fantasy Club #4 challenge for the dessert was churros. When I read the word, I thought, gosh never heard of churros.Research began on the internet. I asked my daughter if she had ever tasted them and she just went yummy and asked “when are you making them?” However, I didn’t get the time to make them in Bangalore. I made them yesterday (totally am losing track of time). The first challenge was handling the icing bag. My son bought it for me from Dubai but I have never bothered to ice cakes or muffins with it. I prefer using an icing tube. My churros is the basic recipe provided by Preeti of Simply Tadka and the initiator of The Sweet Fantasy Club. To make it a bit different I added coffee powder and cinnamon powder to the dough. When I started squeezing the dough out of the bag with the star nozzle, the task was taking forever and the oil beneath was getting hotter and hotter. Turned off the gas and piped them on the work surface to the required length. After all the dough was piped, I began frying them. My hubby had it for dessert and thought the taste was interesting. Churro is fried dough pastry (choux pastry) famous in Spain,France, Philippines Latin America.Normally eaten for breakfast by dipping in thick hot chocolate. Its popular street food in countries like Venezuela,Columbia etc. Some countries like US and Mexico serve it with sugar and cinnamon sprinkled on top.

Preparation of the topping:

Last theme Gratitude for May ends. Grateful for al